On Bulls, Bullies, and Brawlers 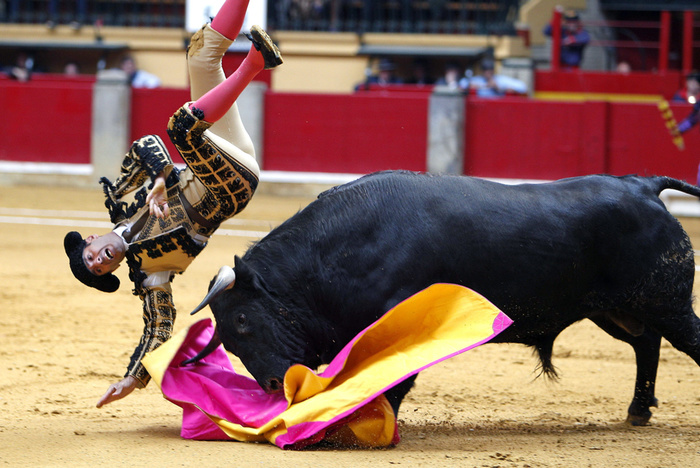 Sokon Matsumura grew up on the island kingdom of Okinawa, where the ownership of weapons had been prohibited since the fifteenth century. In a nation of martial artists, Matsumura came to be known as one of the finest and found himself in the service of Okinawa's king as the monarch's bodyguard and martial arts instructor. But Matsumura had something of a rocky relationship with the king, being dismissed from the king's service at one point due to losing his temper during a training session. One way or another Matsumura found his way back into the king's good graces, but not before it was announced that Matsumura, the king's personal bodyguard and the finest warrior on this weaponless island, would fight a bull barehanded for the entertainment of the public.

Of course, any story you have ever heard about a karateka fighting a bull or a tiger barehanded is absolute nonsense.  There's an entire phase of an actual bullfight dedicated to jabbing and hooking the bull and allowing it to wear itself out against horses before the part with the matador that everyone knows about even begins. The idea of taking on a bull unarmed and unassisted is obviously ridiculous. Unless you count when Masutatsu Oyama, the founder of kyokushin style karate, famously defeated around sixty bulls barehanded. One was even caught on film. Except he didn't: he fought no bulls, and he wrestled with a poor old ox in front of a camera. Then they hit it in the horn with a hammer until it was hanging off and he karate chopped it onto the ground on film. Bulls do not move like this and simply accept a former strongman slapping them around, sad old beasts of burden do:

Anyway, the day of the spectacle came and the legend goes that Matsumura stood ready to fight for his life. The gate opened and the bull was brought in. It took sight of Matsumura, and Matsumura looked it back straight in the eye. Matsumura's striking, ethereal eyes are normally mentioned at about this point in the story. A moment after locking gazes with Matsumura, the bull turned tail and ran to the furthest point of the arena and refused to attack him. Sokon Matsumura triumphed without a single strike and the king bestowed on him the title of bushi or warrior. Bushi came to replace Matsumura's given name and he remained a hero of the Okinawan population.

What makes the stories about Matsumura different are that they do not come down to his magical karate powers, they are instead stories of guile and manipulation. I believe I have previously recounted the story of Matsumura winning a duel with 'Karate Uehara' by (again) not throwing a strike; choosing to meet the superstitious man at sunrise in a graveyard and arriving late to allow Uehara time to think himself into timidity. The bull story is a little different. In the weeks up to the fight, Matsumura would go to the pen of the bull every day and simply stare at it. When he was sure no one was looking and that the bull had seen him, he would drive a needle into the end of the bull's nose, causing it considerable pain. He did this every day, first staring at the bull for a period, and then pushing the needle into its snout.

Bulls are intelligent animals. They are aggressive, no doubt, but they learn from their mistakes and from pain. This is the reason that bulls are not re-used in bullfights. Supposedly the high instance of human deaths resulting in the 1567 papal decree against the sport was the result of rural venues refusing to kill bulls and re-using them. Once a bull understands how his man will move, and isn't distracted by the cape, he will change direction or 'hook' more readily and he becomes far, far more dangerous. Ernest Hemingway asserted that the spectacle of the bullfight is built entirely upon the bull never having experienced it before. If a single fight drags on too long the bravest of bulls can turn into a cautious bull and retreat to a spot of the arena in which he feels safer. Confronted with a figure who he associated with acute pain from an invisible source, it isn't hard to believe a bull would have a Pavlovian instinct to flee.

The story is probably hogwash but it makes an interesting point which is very pertinent to the game of fighting. It has to do with bullies and brawlers. A bully is a fighter who loves dishing it out but hates taking it, a brawler is a fighter who is happy to take it in order to continue dishing it out. It isn't a binary thing though, it's more of a spectrum. Just as every man from the ninety-seven pound weakling to the great Randy Couture can be turned foetal if he is hit hard enough in the body at the right time, almost any smothering fighter can turn from a brawler to just a bully in a moment.

The bully mindset is something most will remember from their youth. The big lad who likes to throw his weight around. Typically bullies hate nothing more than being stood up to, thriving on weakness instead. Standing up to a bully might well end up getting some kids butt kicked, but even then the majority of bullies will always look for an easier target, one who won't fight back. In professional combat sports, no-one is scared of getting hit. It's about how hard you can get hit without changing your mind about your method.

In fighting, offensive whirlwinds are a dime a dozen and all out aggression is so hard to deal with that you can find guys getting to the top of the game without ever showing a moment of weakness. Defensive guile can serve to undo the aggression of an all out scrapper but the thing which the offensive fighter so rarely expects from the technician is to be blasted straight in the face. It sounds counter-intuitive, you don't brawl with a brawler but often the first punch of the fight can plant more doubts into a fighter's head than two solid rounds of being out classed.

An excellent example of this can be seen in one of my favorite fighters, Matt Brown. Brown is an absolutely smothering offensive fighter—a 'technical brawler'—but he has fallen victim to this. Now this is not a question of heart, Brown has all the heart in the world as he showed when he was dropped by an Erick Silva body kick and spent the best part of two minutes fighting off the rear naked choke while winded, then got to his feet and didn't give Silva a moment's rest until the fight was over two rounds later.  But when Brown fought Robbie Lawler, Lawler had his work cut out and quickly changed the complexion of the fight away from the nightmarish swarming slog that Brown normally brings. The first time Brown stepped in Lawler dug his heels into the mat and cracked Brown on the jaw with a hard right hook. No feeling out process, no moving around, just throwing power strikes as soon as Brown tried what he normally does.

And it worked. That needle in the nose convinced Brown on some level that this would happen every time he stepped in. Brown got inside of his own head and changed the winning formula. He stepped back and turned the bout into a kickboxing match. Lawler was given time and space to work and never had to worry about the smothering pressure of Brown's usual game which is enough to take it out of anyone in the welterweight division. Brown is not a man suited to darting in and out, one blow at a time.

Of course, the alternative reaction is for the opponent to disregard their own safety and continue regardless. But that in itself can be a change in mentality. In the first round of the Rumble in the Jungle, Muhammad Ali had advertised that he would be dancing around and outboxing George Foreman. The truth was that Ali's legs were largely shot, and that Foreman could cut the ring on him like no other heavyweight had. After weeks of talk about his jab and his jab, Ali came out and blasted Foreman in the face with a straight right. And another. Right hand leads, like young Cassius Clay had been able to get away with in the amateur ranks. Every time Foreman stepped forward to crowd Ali, Ali smote him with the right. Norman Mailer recalled thinking that Ali hadn't punched like that in seven years or more.

The tactic was clearly to break Foreman's will as the aggressor. He had been able to smother and bully everyone he had fought. But as it turned out, Foreman could take the punches and walk through them. That is not to say that Foreman was stoic. In fact, the punches infuriated him. Foreman went into overdrive and as Ali moved to the ropes, Foreman went wild trying to hurt the champion with long, wide swings. Foreman eventually punched himself out and Ali came off of the ropes in the eighth round to knock Foreman down for the count.

Fighting science is truly a wonderful thing to have but sometimes the act of meeting force with force and the psychology of the first blow goes under appreciated. Just as Pavlov's dog began to salivate every time his owner rang the bell, fighters can be taught to associate aggression with pain by hitting hard and early. Of course, it isn't an answer to all offensive fighters and doing it with any kind of regularity will quickly have opponents braced for an opening rush after studying film, but that is the beauty of those few moments of fight psychology turning a bout rather than technical excellence or physical endurance. Whether the tale of Matsumura's bovine psychology is true or not matters naught, Matsumura's needle has been seen to change minds and turn fights on the biggest stages in combat sports.

Kotoshogiku: The Japanese Ozeki Who Could

George Foreman: Student of the Greats