On the Point of a Spear: The Art of Reach and Range 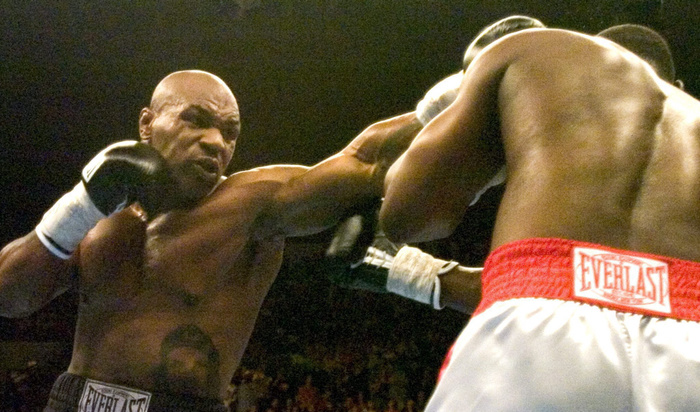 The fight world, and conventional warfare in general, has always been governed by reach and range. It was seen in the introduction of firearms and artillery to warfare, it was seen in the arms race for range of artillery, and again in the race to develop means and sites from which to deliver a nuclear payload through the Cold War. If you can park up your artillery ten miles out of range of the enemy artillery and still within your own shelling range, you're laughing. And so a man who uses his range well in a fist fight should be able to control the fight and keep the opponent on the end of his strikes.

But in a dynamic, close range fist fight a reach advantage is only a paper advantage. It isn't a modifier on probabilities in a crap shoot of a fight, it must be made to mean something in each moment of each fight. The reason that Jon Jones and Lennox Lewis are so remarkable is not because of their reach but because they consistently make use of it and bring it to lever on the fight. Eighty inch reaches are not hard to come by in the modern world and though many amateur fighters wistfully think about how much better they would be with a few inches more reach, the number of quality fighters truly capable of making use of a reach advantage is miniscule.

For the longer man straight strikes are king. Rounded strikes are both shorter, wider, and can be stepped inside of. You cannot step straight in on a jab, a straight right, or a linear kick if it is on target. I reiterate: if it is on target. And that is where so many tall men fail. Hours and hours can be spent polishing the form of the jab and preparing to pump it out and it can all be for naught. Each straight strike thrown is a spear thrust, tremendously hazardous for anything directly in its path, but worthless an inch to the left, right, above or below its intended target. The instant that it misses, it is an open elbow which in any portion of the martial arts—striking or grappling—is a gaping hole.

Of course it is only a momentary hole. If the shorter fighter only begins moving in when the blow has missed, another jab or a right straight may be pumped out. But if the shorter man is in the habit of constantly moving and has the reaction of evading and closing the distance already trained into his instincts, he becomes a nightmare for the taller fighter. The constant motion over Joe Frazier and of Mike Tyson provides two windows into this. Through constant evasive movement and forward pressure, they made every pumped jab a risk, rather than in attempting to slip and step in only when the opponent fired.

But this all comes down to timing. The split-second, the hemi-demi-semi-quaver beat of difference between the landed jab and the slipped jab, between disaster and opportunity. And that is what separates learning to pump a picture perfect jab and actually showing mastery in it, it is a relationship between two people and not one throwing his technique and the other simply being the target. When Tyson's timing failed him, when he was feinted out and caught on the end of the jab, he looked helpless. As when he came out sluggish against a spectacular Buster Douglas, or against the aforementioned Lennox Lewis.

The reach advantage snowballs through strikes landed, and weakens with every strike successfully smothered or stepped inside with a counter. Nowhere is that clearer than in the pair of bouts between Badr Hari and Semmy Schilt. Schilt had been largely unstoppable through his career as a kickboxer, a seven foot giant with the sharpest technique and wits for fighting ever seen on a man that size. A karateka and a natural left hander, he came to master the jab and the lead leg front snap kick to the body. This kick, a straight kick which arcs up from the floor rather than pushing in as the traditional Muay Thai teep or neb does, winded dozens of opponents through Schilt's career and gave them no chance at striking back at him.

So frustrated were most opponents that they eventually gave in to chasing Schilt's leg back to him and eating a powerful jab on the way in.

The front leg snap kick could also be brought up on a forty five degree angle to the liver in what is called sankaku-geri or the triangle kick. And finally the step up which Schilt always made in the preliminary motion of the kick perfectly disguised the left high kick with which Schilt would often catch opponents by surprise.

When Schilt met the young upstart Badr Hari in May of 2009, Schilt set about doing the same things he had done in every fight. Asking the same perplexing questions and never having to field any in return. Except Hari wasn't having it. To mitigate the straight kick and the triangle kick, Hari utilized a cross check. It is rare to see this technique used extensively in kickboxing, it is more an occasional defence applied when caught on the wrong foot. Except it served to both check the triangle kick and knock the straight kick off line as a parry. Each time Schilt kicked, it was knocked off line and Hari stepped in on him with the right hand. Schilt hit the mat twice in the opening minute and the fight was waved off as Schilt suffered his first knockout loss in five years.

When the two met again in December of the same year, Schilt was on point and this time it was Hari was trapped on the end of Schilt's reach. The kicks from Schilt were more carefully placed, he held himself back, and when Hari did step in off of a Schilt kick, he ate the jab. After eating the first sledgehammer lead and being dropped to the mat, it all spiralled out of control for Hari. He sat on the end of the giant's reach, was winded, and was finally knocked down with a head kick.

The idea that the reach advantage is a constant is one of the dafter parts of combat sports. Reach is just reach. It can be an advantage, and it can just as easily be a tremendous disadvantage. The strikes are longer and so is the range of effectiveness, but so are the recoveries from strikes and the range of discomfort between outfighting and the chest-to-chest clinch. It rarely come down to the fundamentals of a good jab or push kick at the highest levels, because all of the polished form in the world means nothing if the shorter fighter can convince the taller man to fire that shot or thrust that spearing straight strike earlier than he should.

On Bulls, Bullies, and Brawlers