One Night in Thailand: Gamblers, Child Fighters, and Muay Thai 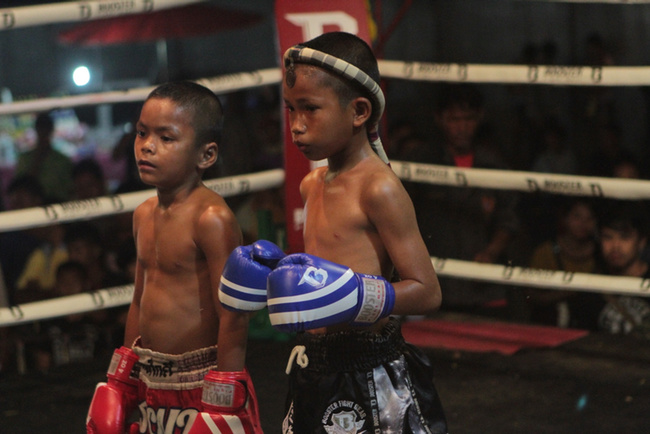 On the evening of a festival fight in rural northeastern Thailand, gamblers surrounded a rickety ring, set up just hours before, and threw down bets for the first match of the night: Bpaet "The Khorat Kid" Lukmaemali against Pupa "Rocky Mountain" Dor. Pewlawpakdee.

It was an easy call for most gamblers: Bpaet might have been a couple years older, but Pupa had well over a hundred professional fights, dwarfing Bpaet’s measly ten. Pupa was officially ranked, often commanding million-baht side bets (close to USD $30,000) between his and his opponents’ gyms. Plus, Pupa was the younger brother of famous fighter Moo-Sua-Dam, a regional champion and one of the best-known young contenders in the area.

This fight, though, wouldn’t command a large side bet. Pupa was regionally famous; his opponent was an unknown. Regardless, the gamblers bet thousands of baht on the boxers, some taking the sure winner Pupa, the Rocky Mountain himself, others intrigued by the confident newcomer Bpaet, the Khorat Kid. It didn’t matter to the gamblers that these were children they were betting on. In Thailand’s Muay Thai culture, child boxers are often considered just as legitimate as adults. Rocky Mountain, the favorite, was nine. His challenger, the Khorat Kid, was twelve.

In some gamblers’ minds, the age difference leveled the playing field. Bpaet was taller and older, but Pupa was stocky, solid, and with far more experience. Bpaet heard that Pupa had knocked out an older kid, a twelve-year-old like Bpaet, just last month. But rather than fearful, Bpaet was exhilarated to share the ring with someone of Pupa's level and reputation. 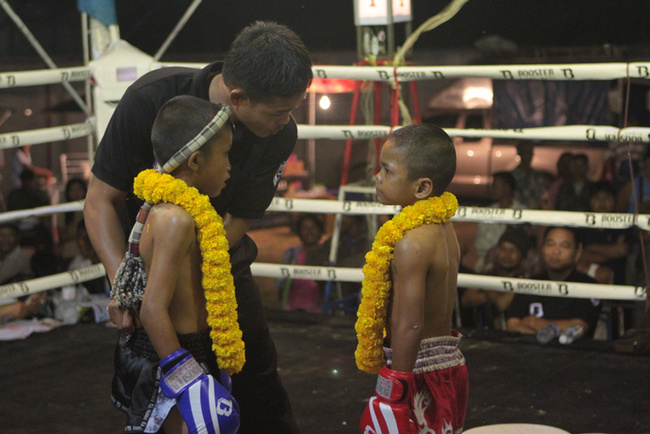 First round began slowly, as Thai fights often do, but quickly picked up. Bpaet was putting on a good show, not visibly intimidated by his seasoned opponent. Instead of running away, he came forward, breaking Pupa's flow with high push kicks to the side of the face, a gutsy technique Bpaet’s gym owner later lauded as “amazing.”

By the end of the second round, bets started shifting. It is not uncommon for Thai gamblers to place different bets in between each round, based on the fighters’ performance and the changing odds. 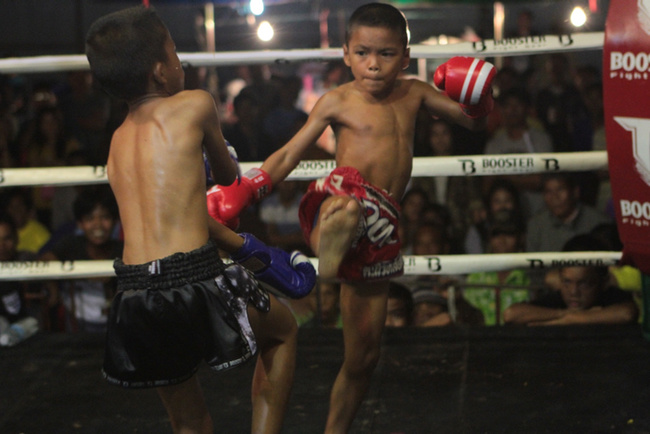 For Pupa, this was just another fight. Every fight is important to a promising young contender, but after well over one hundred fights, nine-year-old Pupa knew the drill. He bobbed his head, kept his guard up, tried to show dominance and technique, just as he’d done in the ring for the past few years, ever since he started training in the shadow of his champion older brother, now fourteen.

For the boy in the opposite corner, though, this was part of his new life as a fighter. A product of a broken home, Bpaet walked into a dirt-floored gym the year before, asking to train. He loved fighting from the first time he tried it, loved the showmanship and attention. He quickly bonded with the owners of the newly formed gym, Wor. Watthana, and became one of their most dedicated fighters. Now he could hear his team screaming instructions from his corner as he took on one of the most famous young fighters in the region. 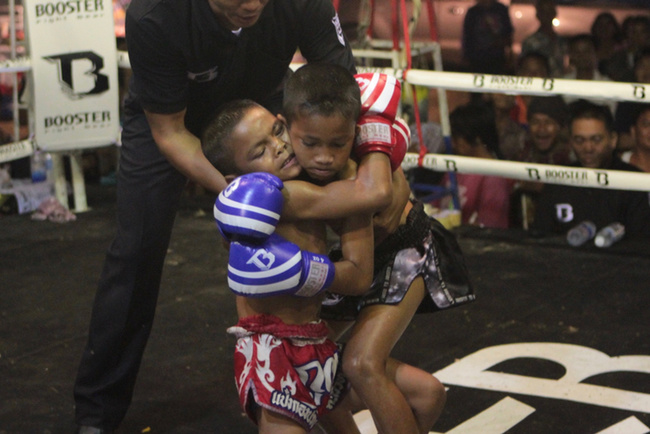 Bpaet’s trainer Dam jumped into the ring when the bell rang between the fourth and fifth rounds. "You just won the fourth," Dam said. "Keep your head in it."

Boom, one of the owners of Wor. Watthana, rubbed his young fighter’s arms and carefully gave him sips of water. He and Dam rushed to give Bpaet directions, but Boom knew what kind of kid Bpaet was, knew Bpaet would take his words only as suggestions. Bpaet was Wor. Watthana’s cheeky fighter, the creative one, always putting his own flair on the concrete advice from his trainers. His gym owners and trainers thought of him as fearless and innovative, a risk-taker with traits they deemed rare in a modern Muay Thai fighter. They pegged him as the type of fighter who could become a maemai star, someone brave enough to attempt the classic, notoriously difficult maemai Muay Thai movements in the ring.

But now, he was just a twelve-year-old kid fighting in a temporary ring set up at a festival in rural Thailand. But by virtue of his opponent’s fame, Bpaet was already making a name for himself. He arrived as a nobody, but gamblers watched as this nobody was scoring point after point against the odds-dominating favorite. By the last round, Bpaet was doing so well that the odds had shifted severely. The nobody was the new favorite, and Pupa and his corner knew it. 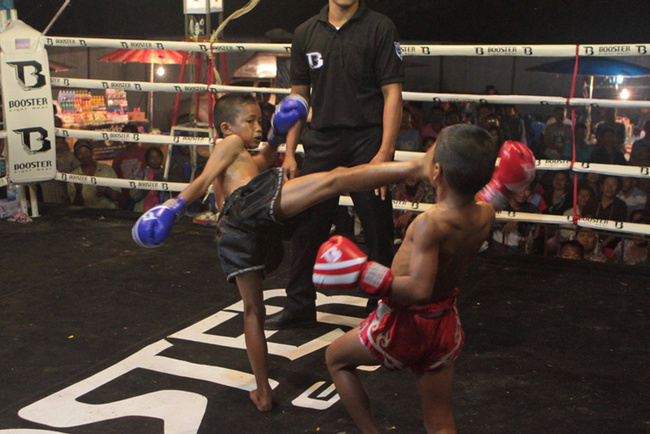 Pupa backed off in the final round, refused to engage in combat with this upstart. Bpaet’s awkward yet aggressive technique, combined with his lanky limbs, threw Pupa off. Frustration was visible on the young boy’s face.

Meanwhile, something unexpected was happening in the audience. The gamblers were so convinced this newcomer Bpaet had won against the untouchable Pupa, that they settled their bets before the final bell rang. Those who'd taken the underdog's side from the very beginning were rejoicing. Latecomers to Bpaet’s party were glad to have gotten in on the action even when the odds weren't so lucrative. 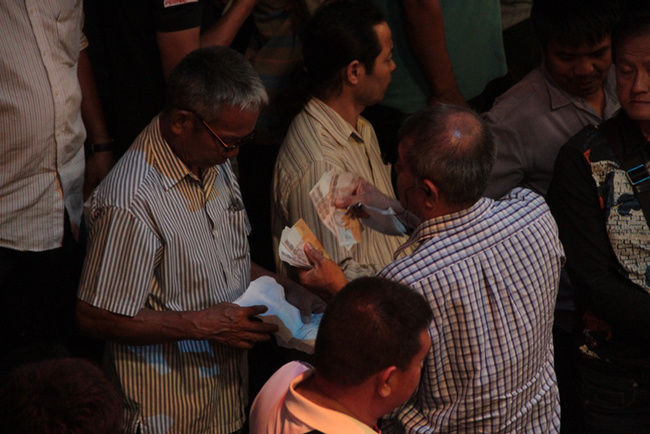 When the bell rang and the referee gathered the scores and raised Pupa's hand, however, a collective scream erupted around the ring. It was Bpaet’s fight, dozens of spectators argued. One gambler flung a beer bottle into the ring. Others followed suit, chucking trash and shouting obscenities at the judges.

The manager of a fellow Wor. Watthana teammate confronted the referee on Bpaet's behalf. "Everyone saw Baept winning,” he said, and reminded the ref that Pupa refrained from fighting in the last round. “How can a fighter give up in the fifth and still win?"

The ref had no convincing answer.

In the midst of lobbed bottles and onlookers' jeers, Wor. Watthana gym owner Frances grabbed Bpaet by the shoulders. He was still in the ring, looking around the mele his fight caused, overwhelmed at the adults’ reaction. "Look at me," Frances said, waiting until he made eye contact before continuing. "Don’t you worry about any of this."

He nodded, then shrugged and finally smiled. "I know I won.”

Bpaet's fight had been the first of the night, and set a sour tone for the rest. Gamblers grumbled about losing trust in the judges. The promoter looked embarrassed. He approached Frances and Boom to apologize, asked them not to hold the poor call against him.  He too had been upset with the judges' ruling, he said. He'd been aware of the shift in odds over the course of the fight, how Bpaet had gone from the 10-to-1 underdog in the first one, to leading at 4-to-1 in his favor by the last round.

In the very least, the promoter told them, the Bpaet-Pupa rematch will be worth a lot of money, and other promoters would likely compete to get that fight on their card. Any kid with ten fights who could convince a whole crowd of professional gamblers he was the winner against a popular child fighter with more than ten times his experience, was a kid the gamblers wanted to see again. 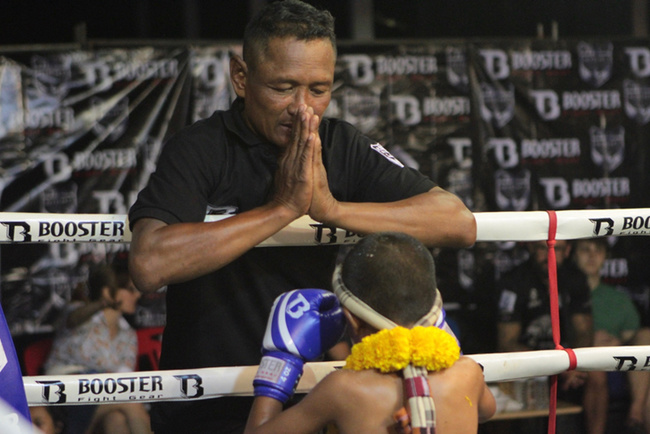 Twelve-year-old Bpaet went home that night with a lesson in questionable rulings and the intimidating power of angry gamblers.

On the way out of the festival, Bpaet’s trainer Dam caught up with the group to hitch a ride back to the village.

"You're lucky I wasn't drunk tonight," Dam said to Frances and Boom.

When they asked why, he said, "Because after that bullshit decision with Bpaet's fight, I wanted to punch out all those judges."