One to Watch: Joe Duffy vs. Reza Madadi 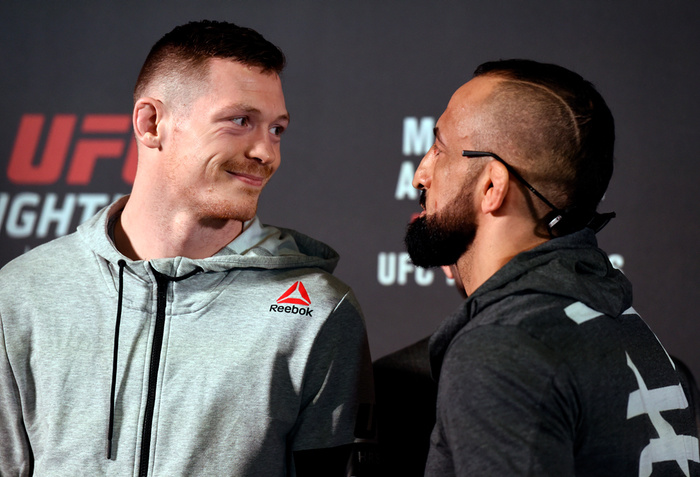 Another weekend, another UFC card. This time, the UFC is hitting the United Kingdom to bring UFC Fight Night: Manuwa vs. Anderson (otherwise known as UFC Fight Night 107) to London’s O2 Arena on Saturday 18 March.

This is the kind of UFC card which caters to the local crowd unlike last week’s Fight Night card in Fortaleza, Brazil, which had a nice mix of Brazilian fighters featured in contests with international interests. While this card is top-heavy with upcoming European talent, this is the kind of fight card which leaves the British casual fan feeling a little overlooked in terms of the UFC bringing its best and biggest names to the UK’s capital city.

Still, there are at least some entertaining match-ups for any MMA fan of varying knowledge. The show, as alluded to earlier, is headlined by a fight between Jimi Manuwa and Corey Anderson in an classic mix-up of styles which could leave a lasting impact on the UFC light heavyweight rankings with both men ranking fourth and sixth, respectively.

In addition, Icelandic favourite Gunnar Nelson returns to the Octagon against Alan Jouban, Brad Pickett bids a fond farewell to his hometown crowd against Ecuadorian Marlon Vera in what will be a fitting bantamweight brawl to see him into retirement, while Makwan Amirkhani takes on Arnold Allen to round off the main card. Earlier in the night, top British prospects Tom Breese and Marc Diakiese also feature on the preliminary fight card.

However, today is St. Patrick’s Day and as those bleary-eyed celebrations overlap into the weekend, it’s only right the Irish celebrate by watching one of their favourite fighting sons in Joe Duffy take on Sweden’s Reza Madadi in a clash between two of Europe’s best lightweights.

Born in County Donegal, Duffy entered the UFC with much fanfare when he signed with the promotion in early 2015—his extra attention largely due to being one of the few men to have ever bettered now-global superstar Conor McGregor in the cage: an arm-triangle choke within 40 seconds under the CageWarriors banner in 2010.

Duffy lived up to the hype attached to his name in his first two bouts for the UFC, handing Jake Lindsey a first-round TKO loss before submitting Ivan Jorge with a triangle choke—the two wins showing the lightweight’s various tools in his MMA arsenal. “Irish Joe” then took on Dustin Poirier, his first true test in the UFC, and lost an entertaining unanimous decision, though he was back in the Octagon six months later to quickly submit Mitch Clarke within 30 seconds in an emphatic return to form.

Now on the last fight of the UFC contract he signed over two years ago, Duffy has been forthcoming in hi talks of testing out the free agency market following his fight with Madadi. Duffy’s Tristar teammate Rory MacDonald has already jumped ship to sign with Bellator, while talents such as Lorenz Larkin and Kyoji Horiguchi have also sought pastures new after receiving unsatisfactory contract offers from the UFC.

Despite the inevitable distractions incurred when thinking about matters beyond your upcoming fight, Duffy insists his contractual stand-off with the UFC will not have any impact on his fight come Saturday night. “This is big business and we have to remember that,” said Duffy (H/T DonegalNow). “The UFC have their budget and what they want to pay. Obviously, we are going to have our number and what we want to make. It's no big deal. It's just the business side of sport.

“It changes nothing really. I carry on and it's business as usual at the weekend for me. Hopefully, after this fight we'll be in talks and we can reach a deal. I love fighting for the UFC. Since I've come on board with them I haven't really anything negative to say. It's a really professional set-up.

Things haven’t always been easy for Reza Madadi. But the UFC has given him some star treatment ahead of this fight, featuring him in their latest edition of the “UFC on the Fly” mini-documentary series.

After defeating UFC veteran Rich Clementi for the Superior Challenge lightweight belt in 2011, Madadi got the call to appear on the UFC’s first ever event in Sweden, taking place in the Ericsson Globe Arena in his adopted hometown of Stockholm, having been born in Tehran, Iran. “Mad Dog” had a successful UFC debut, defeating Yoislandy Izquierdo with a second-round guillotine choke.

Madadi then dropped a tough split decision to Cristiano Marcello at UFC 153, before rebounding with arguably the most impressive win of his career. UFC on Fuel TV: Mousasi vs. Latifi, the UFC event which provided the debut of the aforementioned McGregor, saw the promotion return to Stockholm. Fighting highly-touted lightweight Michael Johnson as an underdog, Madadi secured a beautiful D’Arce choke—which later won him a Submission of the Night bonus—to top off a stirring come-from-behind victory in the third round.

It should have been a time for celebration for Madadi, who had a fight against Michael Chiesa slated for three months later, but the bout was cancelled due to Madadi’s alleged visa issues. Shortly after, the Swede was released by the UFC as he sweated over a conviction for burglary—which eventually led to some jail time.

On June 10, 2015, the UFC announced Madadi was in returning to the UFC. His comeback fight was a dull, stifling affair, losing to Northern Ireland’s Norman Parke by unanimous decision. However, in his last fight, Madadi returned to face Yan Cabral in May, definitively finishing off his Brazilian opponent with punches to earn a TKO win and, in turn, becoming the oldest man to have ever won a UFC lightweight bout not long before his 38th birthday.

Despite what he says, Duffy will be desperate to end his present UFC contract with a win to help with negotiations with the promotion or elsewhere. Once again, the bookmakers has named Madadi the underdog, but as proven with Johnson in 2013, Mad Dog is durable and an underrated submission artist who is more than capable of making fights ugly and earning the upset win.