One to Watch: Joe Lauzon vs. Jim Miller 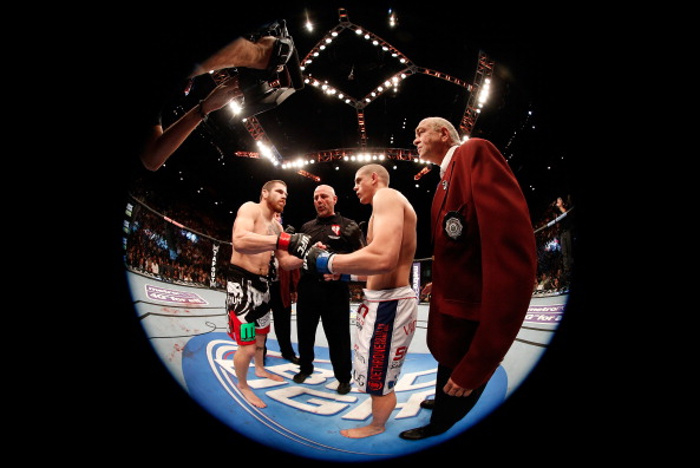 Caught your breath from Conor McGregor’s gritty majority decision win over Nate Diaz yet? UFC 202 may remain fresh in the memory, but it’s no time to reminisce with another exciting fight card coming to fruition on Saturday night.

UFC on Fox: Maia vs. Condit, otherwise known as UFC on Fox 21 sees the UFC return to the Rogers Arena in Vancouver, British Columbia, Canada—only the second time a UFC on Fox card will be held outside of the USA, the other being the show which saw Anthony Johnson demolish Alexander Gustafsson in front of his fans in Stockholm, Sweden.

Further down the card you have enthralling match-ups such as ex-UFC lightweight champ Anthony Pettis versus Charles Oliveira in the former’s featherweight debut, Paige VanZant’s return to the Octagon following her stint on TV show Dancing With The Stars—taking on Aussie scrapper Bec Rawlings—as well as Sam Alvey’s sure-fire barnburner against fighter-rapper hybrid Kevin Casey.

However, there’s one fight that sticks out—and that could be partially due to the fact their first fight was that damn good—with Joe Lauzon looking to avenge his earlier loss to Jim Miller on Saturday night.

The pair’s first battle took place at UFC 155—the UFC’s end-of-year show back in 2012, earning them both Fight of the Night honors.

Their respective high-level Brazilian jiu jitsu games kept the fight standing at first, which showcased both men’s willingness to slug it out in what turned into a blood-soaked war. But, their exchanges on the ground were equally thrilling later on in the fight.

Much of that blood stemmed from a gash opened up on the head of Lauzon in the first stanza of the fight. It was a close contest. But, perhaps aided by the blood flowing down Lauzon’s dome, which left the Octagon mat looking like a crime scene from Dexter, Miller had edged the fight in both the striking and grappling stakes.

Despite this, Lauzon displayed his dogged determination to earn the victory and caught Miller in a deep guillotine in the dying embers of their contest. It was tight, but with just 10 seconds left of the contest, Miller managed to hold on and resist the choke long enough to be saved by the bell. Barely. It was a price worth paying for Miller, who won a unanimous decision with scores of 29-28 across the board.

It’s a quick turnaround for both men. Miller and Lauzon were victorious at UFC 200 back in July, beating Takanori Gomi and Diego Sanchez with two knockout victories apiece. These were important wins for the pair, with Miller going 2-3 in his last five fights and Lauzon going 3-2 in that time.

Each man is at a crossroads in the lightweight division. Both Lauzon and Miller have got to the stage of being talked about as potential title contenders, but that position has remained elusive for them both, coming up short in the big fights which matter most.

With a record of 26-11, Boston, Mass, native Lauzon has carved out a large fanbase for himself despite a patchy 13-8 record in the UFC. This is largely due to the record he held as the recipient of the most fight night bonuses—a record which has since been surpassed by the aforementioned Nate Diaz.

Lauzon has long wanted this rematch against Miller. But, in an interview with MMAjunkie, it would appear he yearns to re-earn that record snatched from him more than avenging his loss against New Jersey’s Miller. Considering how good their first fight was, Lauzon could well get back on track Saturday night. “We’re going to get it back; it’s extra motivation,” said Lauzon. “We’re going to get it back and tie it up again this weekend.”

A real veteran of the game despite his relatively modest 33 years, Miller has certainly experienced the ups and downs of life in the UFC. With a record of 26-8, 15-7 in the UFC, Miller had a poor run of form which raised questions of his ability to keep up with the ever-evolving world of the UFC lightweight division.

However, those losses did come against top-level top 155lbers such as Donald Cerrone, Diego Sanchez, Beneil Dariush and Michael Chiesa. His performances were uninspired, but they did happen to coincide with Miller’s bout of then-undiagnosed Lyme disease.

Sufferers of Lyme disease, which is transferred through infected ticks, have to endure chronic fatigue, flu-like symptoms, joint and muscle pain, fever and headaches. It doesn’t sound like much fun and Miller verified this. “I was feeling like garbage and performing like garbage as well, if I’m going to be brutally honest,” Miller told MMAjunkie. “I had some pretty rough performances. I definitely didn’t go out and perform like I’m capable of fighting. It was good to go out and feel that energy I felt two, three years ago inside the cage because it wasn’t there. At least for four fights. It was good to go out and kind of do it for myself. I know I’m capable of fighting.”

Healthy and feeling good, Miller feels like a man renewed and his quick stoppage of Japanese veteran Gomi is testament to that. Despite the inherent confidence gained from such a victory, Miller is wise enough to not rest on his laurels against Lauzon despite emerging the victor last time around. “It’s a different fight,” Miller said. “I’m going out there to prove the Jim Miller of 2016 is better than the Joe Lauzon of 2016. We had a tough fight last time, but I won. I don’t have it in my head. All I have in my head is that I have a second chance to put him away.”

Lauzon echoed Miller’s sentiments: “It’s one of those things where I always liked Jim. I was always excited about doing it again. It was like, ‘Can it be as good as the last one?’ We’re going to find out. It’s exciting we get to find out.”

The Vultures are Circling for Anthony Pettis