One to Watch: Joe Lauzon vs. Stevie Ray 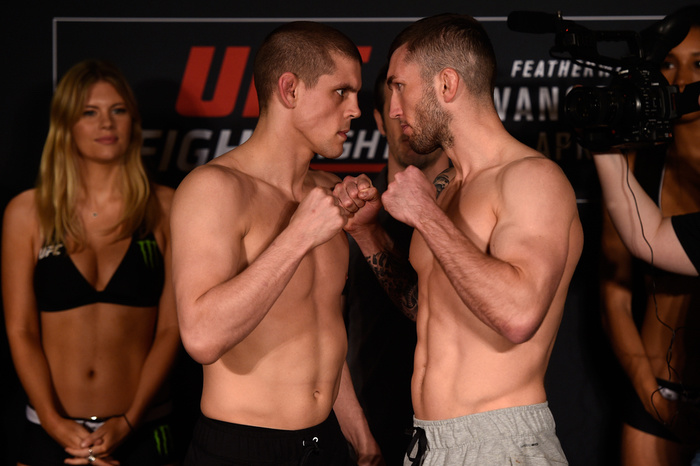 Saturday sees the UFC finish off a run of three events held in three weeks as the circus rolls into Bridgestone Arena in Nashville, Tennessee, for UFC Fight Night: Swanson vs. Lobov—otherwise known as UFC Fight Night 108.

You may not be totally enamoured by Saturday’s headline act, which sees Cub Swanson take on Artem Lobov, but this is one of the most well-rounded Fight Night cards the UFC have produced for some time. A six-fight main card includes intelligently-matched fights such as Al Iaquinta vs. Diego Sanchez, Ovince Saint-Preux vs. Marcos “Pezao,” and John Dodson vs. Eddie Wineland—while the undercard features a good middleweight scrap between Thales Leites and Sam Alvey.

But the best fight flying under the radar has to be the bout between Joe Lauzon and Scotland’s Stevie Ray.

Evidenced by his 15 post-fight bonus awards—a UFC record tied with Nate Diaz—Lauzon is seldom in a boring fight. Now 23 fights into his career, Lauzon has had an up-and-down last couple of years—not stringing together consecutive wins since defeating Mac Danzig and Michael Chiesa between December 2013 and September 2014. Since then, he has alternated losses and victories against the aforementioned duo of Iaquinta (L) and Sanchez (W), Takanori Gomi (W), Evan Dunham (L), Jim Miller (L), and Marcin Held (W).

Lauzon is 14-9 in his UFC career, but his inability to earn consecutive victories and build enough momentum has not seen him close to being considered among the cluster of lightweight fighters on the cusp of a title shot.

Only 32-years-old, Lauzon fight for the 40th time in his professional MMA career on Saturday—you would be forgiven for thinking his role as a middling gatekeeper might see his all-action fighting style eventually wane. Not a chance. Lauzon is excited as ever to fight Ray—a man who is has a penchant for thrilling fights himself—and try and add a win to his latest victory over Held.

“The buzz is still there every single fight week," Lauzon told Champions.co. "The feelings don't change, but how I handle them has. I like to try and keep as calm as I can during the week. Every fight is exciting, every time you make the walk it's exciting, but I try to not let it negatively impact me.

"Sure it would be cool to stop that [his run without consecutive wins], but it's not something I take any notice of. I've fought a load of really tough guys and I always try to push myself. That just means sometimes I win, and sometimes I don't. That's just the way it goes when you fight in such a tough division. It's not something I'm going to lose sleep over. I never think past one fight at a time because your next fight is always the most important. This weekend, it's no different."

At 27, Ray has long been considered one of the UK’s most gifted up-and-coming talents and is now 4-1 in the UFC, fresh off a split decision win over the ever-tough Ross Pearson towards the end of 2016 to get over a decision loss to wily Brazilian Alan Patrick—adding to TKO wins over Marcin Bandel and Leonardo Mafra, and a unanimous decision against Mickael Lebout.

The Fife-born fighter has some credentials, being a former Cage Warriors lightweight (x2) and BAMMA lightweight champion while on the European circuit. But, in Lauzon, Ray will be facing by far the biggest name of his budding MMA career on Saturday night. Ray is both excited and confident in anticipation of arguably the biggest challenge he will have faced in the Octagon so far.

“After I beat Pearson I called out Diego Sanchez,” Ray told Scottish newspaper the Daily Record. “But I also said in a couple of interviews that someone like Joe Lauzon would be an exciting fight too. Soon after I basically got the call and they offered me Joe in Nashville. This will certainly be the biggest and most important fight of my career so far. I know Joe has all those performance bonuses but I always prepare for a fight to go the distance. He is a tough guy but he has been in a load of wars and he has taken a lot of big shots. I have watched a lot of footage of his fights and he hasn’t got the best striking defence, he gets hit a lot.

“I know a win over Joe will be the start of what could be a really good year for me. I will be asking for a big fight in Glasgow; hopefully the co-main or even the main event.”