One to Watch: Mickey Gall vs. Mike Jackson 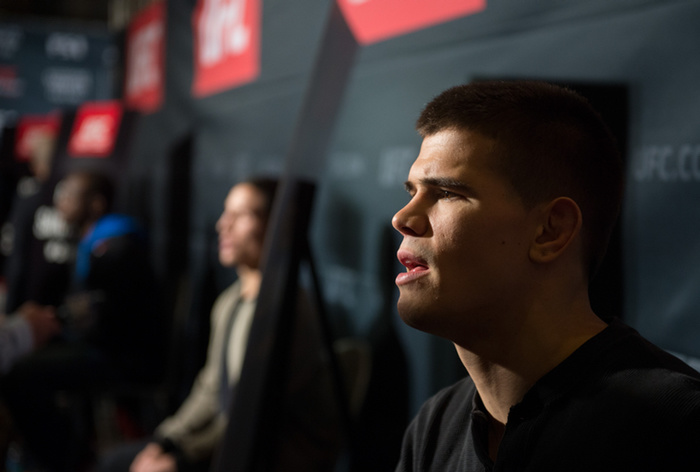 Originally billed as UFC 196, Cain Velasquez was supposed to make his attempt to regain his heavyweight title against his conqueror in Fabricio Werdum. But, just two weeks before the event, Velasquez had to pull out of the fight citing a back injury which had prevented him from training for one of the biggest fights of his career.

The UFC scrambled to create a new headline fight for the show in Las Vegas. Croatian-American heavyweight Stipe Miocic duly accepted his opportunity to compete in the makeshift title fight against Werdum. However, the Brazilian also backed out of the contest through injury—leaving UFC 196 without the heavyweight title fight it had promised.

Following the slew of bad luck and resultant injuries, the UFC accepted defeat and rebranded the show as a Fight Night card to be broadcast on FOX Sports rather than on Pay-Per-View.

Saturday night’s headliner is a sure-fire barnburner with Johny Hendricks taking on the spectacular Stephen Thompson. On paper, it’s a classic wrestler versus striker match-up. But, with Hendrick’s KO power in both hands, that is certainly not the case.

The above fight will most definitely catch the eye. But, there is a similarly intriguing contest a lot lower on the fight card—a match-up between two unknowns with huge implications for their respective MMA careers.

Mickey Gall will be competing on UFC Fight Pass in his sophomore MMA outing—his first in the UFC—against professional MMA debutant Mike Jackson. It’s odd to see guys with 1-0 and 0-0 records competing against each other on a UFC card in Las Vegas. But, the winner’s prize is a crack at former WWE megastar CM Punk according to UFC president Dana White.

Gall caught the eye of both Dana White and Matt Serra when they attended his professional MMA debut in Philadelphia at Dead Serious 17 back in November. The pair were filming the UFC’s fledgling “Lookin’ for a Fight” show as Gall won his inaugural pro fight against Ron Templeton by rear naked choke.

With a 2-0 amateur record ahead of the fight against Templeton, Gall clearly had a good fan base follow him from New Jersey, where he trains at multiple gyms including Miller Brothers MMA—founded by UFC veterans Jim and Dan Miller.

It was Gall’s ground game which earned him the debut victory. But, his rangy and awkward striking, followed up by a well-timed takedown, shows the recently-turned 24-year-old has plenty of skills which may not totally befit the fledgling status his MMA career.

The win was as impressive as it could be against another inexperienced newcomer. But, his swagger and post-fight canter is what sealed the deal for Gall and the UFC. Calling out CM Punk was a masterstroke on Gall’s part: his debut win and subsequent offer to CM Punk would be seen by millions of people on both Fight Pass and YouTube. That is promotional work a pro wrestler like CM Punk would surely appreciate.

The following success of Lookin’ for a Fight really built a case for Gall’s potential lottery ticket in fighting CM Punk and it seems to have paid off with Dana White confirming on TSN that Gall will be the first opponent for CM Punk should he overcome Jackson on Saturday night.

Excited by his potential showdown with CM Punk, Gall is already thinking beyond the Jackson fight, talking to the press about what he plans to do to the former WWE heavyweight champion of the world.

Talking to MMAFighting, Gall said of CM Punk: “Honestly, man, I think that guy’s used to going into a ring and whispering to his guy, ‘Hey, let’s do a clothesline. Hey, let’s practice jumping off the ropes and this and that. I think when he gets in there and he has me coming at him looking to kill him, I don’t think he’ll be able to handle it. He’s a professional wrestler, and he’s great at that. He’s made himself a millionaire doing that. But now he’s stepping into a different world, and I think he’d be in a lot of trouble."

The fact there is already a UFC opponent waiting for Gall appears to have been lost in all the CM Punk bluster.

That man is the carefully-named Mike Jackson, not to be confused with the diseased King of Pop. With a professional record of 0-0 and an amateur run of 0-1—his sole fight a decision loss to Nick Felder back in 2009—Jackson holds the distinction of being one of the few men and women ever to make their professional debut in the Octagon. Not only that, Jackson also has an interesting background in his own right.

Jackson is the official photographer for the Texas-based Legacy FC promotion—as well as an MMA writer, videographer and blogger at his website (www.mikethetruth.com). A true MMA renaissance man.

In fact, he actually interviewed Dana White while working in his usual capacity last year when the UFC president attended a Legacy FC show.

The Houston native is in a bit of a tricky spot. As mentioned before, despite Jackson having more than enough about him to cause an “upset” and ruin the UFC plans of pitting Gall against CM Punk, he is already somewhat of a forgotten man.

The above interview between Dana White and TSN’s Michael Landsberg sees only Gall’s name mentioned as a potential match-up for CM Punk. What happens if Jackson wins? Only the UFC knows, but it remains to be seen if Jackson is afforded the same opportunity as Gall should he emerge the victor. However, it would appear foolish for the UFC to not make that happen.

With rumours circulating about CM Punk finally making his entrance to MMA in 2016, you’d be a fool to miss Gall vs. Jackson this Saturday night.

Cross-Training with CM Punk and the New Jersey Devils