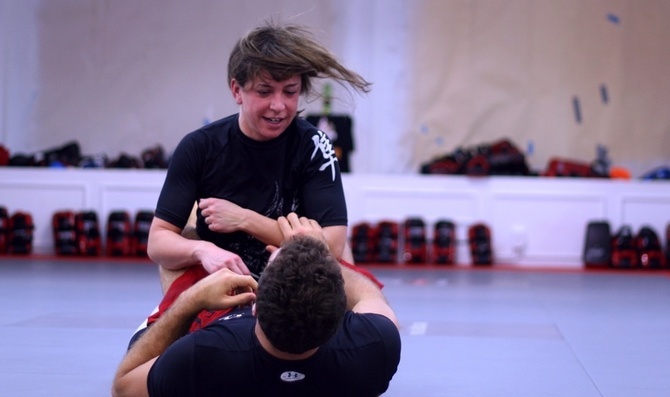 There’s a chair facing the mats at the academy. There’s always someone sitting in that chair during classes. Someone with a knee brace. Or an arm sling. Or crutches.  Someone who’s injured but can’t stay away.

When I first enrolled at the Renzo Gracie Academy in New York City I would hear people say how Brazilian jiu-jitsu is a way of life, how it made them better human beings, how they couldn’t, wouldn’t ever stop or trade it for anything else. Honestly, I thought these people were a little crazy. I’d see them at the academy when I trained in the morning, then I’d also seen them if I trained at night, and I couldn’t help but wonder if they had any lives outside BJJ. Little did I know I’d become one of them.

I started training jiu-jitsu about a year and a half ago. I went from training three times a week to training three times a day. I love everything about it; it’s challenging, complex, humbling, many, many times frustrating, but always rewarding. There’s a tremendous sense of camaraderie I’ve never encountered before. When one of our professors, Rafael Sapo Natal, won his fight at UFC on Fox last weekend, I was ringside, and I became so visibly emotional people were asking me if he was my brother!

Now I can’t go on vacation unless there’s an academy I can practice at. I rarely drink and I mostly eat consciously to keep a healthy body. I dream about BJJ most nights, vividly; I hip escape a lot in my sleep. A couple of times I've jumped guard on unsuspecting friends, to their understandable dismay. Sometimes, without realizing it, I start speaking with a funky, quasi- Brazilian accent (my husband finds this particularly disturbing). I have Zebra mats in my apartment. And a grappling dummy. My bedroom has piles of Gis and rash guards and instructional videos in every corner. I’ve become a hoarder.

The most important thing in my life is my family, but BJJ definitely comes second.  Pretty clothes, shoes, bags, perfect hair, vacations, partying -- all those things I once cared about no longer seem so important. As long as I can keep training, I’m happy.  When I suffered injuries over the past months, and I was faced with the possibility or not being able to train, I realized how difficult it would be to stop. Interestingly enough, most of my injuries happened doing something other than BJJ, which made it, somehow, even worse.

I fractured my clavicle over the summer; I didn’t stop training. Of course it hurt, but the pain seemed to magically go away while I was on the mat. I suffered a partial hamstring avulsion a couple of months ago; I didn’t stop training. The doctor told me I shouldn't train for eight weeks. I heard him loud and clear, but I was back at the academy the following day. I broke two of my toes and didn’t stop training. Both times it took so long for them to heal I considered chopping them off.

Because when you have this love for BJJ, there’s nothing worse than not being able to practice.

I asked a few of our black belts, who have been doing this for much longer than I have, to share their experiences with BJJ addiction:

I’ve been doing BJJ for 20 years. At first I was doing it because it sort of complemented my stand up. But the more I did it, the better I became, the more I wanted it. The more I knew, the more I realized how intricate and technical it is, and over time I just got hooked. Unlike many other sports, like running or lifting weights, when you do BJJ you can’t think about something else; you are only focused on your training for that hour. It gives you a break from anything else.

In BJJ your competition is really yourself: Where were you a year ago, two years ago, three years ago? Are you better now than you were back then? You try to do better than you did the day before, the week before.

For many, BJJ becomes an addiction, but it’s a good addiction. I train seven days a week. I went down that hole!

Not being able to train would completely drive me crazy.  If I’m injured and I can tape it up and put it together then I will. But there was a time I injured my lower back and for a month I literally couldn’t put my shoes on.  During that time I was fortunate enough to be put on muscle relaxants, and I was in a haze. My family actually liked me better then! There are people who deal with it in a productive manner -- they come to class, they watch, they take notes -- but for me if I can’t do it. I’d rather check out.

If I’m on vacation and I don’t have a training partner, I drill in the water. I don’t even want to think about not being able to do BJJ anymore.

BJJ is addictive; once you start training you want to do it more and more and never stop; you want to learn faster than you could possibly do.

I made all my best friends through BJJ. At a certain point in my life I’d spend more time with them than my real family.

Because of injuries I was forced to stay away from training a couple of times, once for six months and once for four months. Back then I was training 2/3 times a day and staying away was just horrible. I would still go to the academy every day and watch, but every day I would almost cry because I couldn’t train.

BJJ has been such an influence in my life. Since the time I was a blue belt, everything revolved around BJJ, I made the commitment to achieve a black belt, open a school, and tech for a living and that’s it. Everything else has been secondary. Including other work that I’ve done and relationships that I pushed to the wayside because it was either the relationship or jiu-jitsu, so I picked my relationship with jiu-jitsu.

As you are coming up in BJJ, other things become less important, and this becomes the only thing that you really want to do; I stopped lifting weights, I stopped eating really bad food, I stopped hanging out with certain people. A lot of guys could be out drinking or doing something they shouldn’t be doing. I always joke around with my girlfriend, at any given time of the day she knows where I am: I’m either at the academy in NYC or my academy in Hoboken, or I’m in transit. That’s it.

It’s hard to stay away, I’ve only been injured badly twice and I still tried to train light. The most I could probably stay out is a day or two, let the initial injury subside, but unless it’s something broken, we tape it up, we wrap it up, we cover it up just so we can train.

I don’t know what I would do if I couldn’t do BJJ anymore. I can’t even imagine. To not have this in my life, it wouldn’t be a good life at all.

The Fighting Chefs of Philadelphia