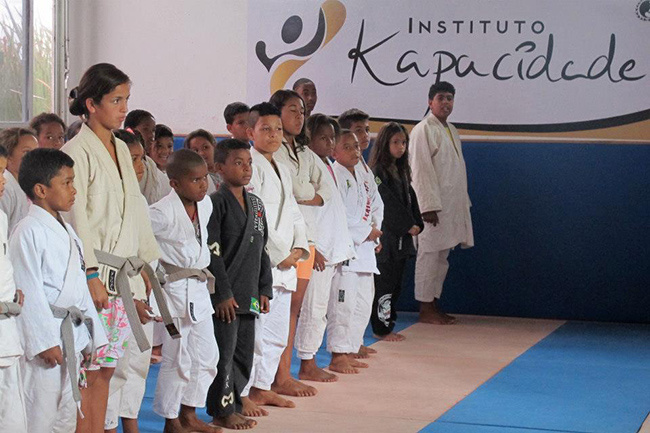 In July 1993 the world was shocked by the news of the massacre of eight homeless children near the Candelaria church in Rio De Janeiro, Brazil, by a group of adults that included police officers. What was more shocking was that the incident wasn't isolated. In the favelas, children were routinely shot during exchanges between drug gangs, but far more horrifying were the so called “death squads,” organized groups composed of ex-police officers, professional killers, and civilians who were hired by private companies and shop-owners to “clean up the streets” and, in some cases, physically eliminate street children. In a country plagued by poverty—where street children, already severely limited in their options, all too often spiraled into drug dealing, crime, glue sniffing, and drug use—many Brazilians were only too happy to welcome the death squads.

In the past decade, however, efforts have been made to improve life in the favelas and reduce poverty and the violence that comes with it. The election of President Luiz Inácio Lula da Silva brought some much needed stability to the country. The introduction of the “Bolsa Familia”(family fund), the largest cash transfer program in the world, where poor families are paid a benefit on the condition that their children attend school and take part in the national vaccination program, has reduced poverty by 25%. In 2008, community-based Police Pacification Units (UPPs) were introduced in the Rio favelas by State Public Security Secretary Jose Mariano Beltrame. UPPs worked under the novel theory that life would be better in the city if there were cooperation between the police and favela residents. Young police officers were recruited and trained to pay special attention to human rights. The increased safety of the favelas contributed to a higher school attendance numbers among children who had previously been too afraid to even leave the house for fear of getting caught up in gang-related violence.

Still, even in the middle of an economic boom, and with the country preparing for both the 2014 World Cup and the 2016 Olympic Games, it’s estimated that half of Brazil’s 60 million children live in poverty.

In May of 2012 I traveled to Rio with my husband to shoot an episode of his show, accompanied by Brazilian Jiu-Jitsu legend Igor Gracie. The highlight of our trip was a visit to Insituto Kapacidade, a non-profit organization founded in 2010 by four-time Brazilian jiu-jitsu world champion Kyra Gracie and businessman Bruno Neves that teaches BJJ to children in need. Using the sport as its main tool, the institute aims to educate and empower children and improve their self-esteem.

That day, in an oblong room, its floor covered with mats, about 25 kids of varying ages listened to the instructions of visiting teacher Igor Gracie. Many of the kids were wearing gis that were too large for them, as if they had been passed down by an older brother. Some of the gis were faded or greying from repeated washings. It was hot in the room, but the kids were clearly happy to be there. They grinned ecstatically when called upon to demonstrate a move on an instructor, beaming at the thrill of sending a much larger man to the ground. Some of them were very young and clearly not used to this level of regimentation, but everyone listened intently. They did what they were told.

On the occasion of an upcoming fundraising seminar to support Kapacidade, I caught up with Kyra Gracie to find out more about the institute.

Fightland: What is Kapacidade about? What inspired you to create the institute and how did it happen?
Kyra Gracie:It all happened when in 2007 I visited the Santa Clara Family (an organization that was Ryan Gracie’s idea and that at the time took care of 70 kids), and I was touched by what I saw. I felt that I needed to help these kids somehow. I started donating toys, clothes, etc. But I knew I could do more, and I wanted to give back what BJJ gave me, so in 2010 I got together with Bruno Neves, who is a BJJ practitioner and was already involved with the Santa Clara Family organization. We started teaching the children BJJ and taking them to tournaments. That’s how Kapacidade institute was created.

How many kids are enrolled? How old are they? Is there a waiting list? What would have to happen in order to accommodate more kids?
Currently we have a little over 150 kids, from 5 to 13 years old. My wish is that we could keep the kids here until they are 17. And we have over 100 kids in the waiting list. We do have the infrastructure to have more kids, but we do not have the budget since our only income is through donation.

Are the kids expected to keep a positive academic record in order to be able to stay in the BJJ program?
Yes, of course. If they get in trouble in school or even on the street they get suspended for a couple of days from the institute. If it happens again they might even get kicked out from here. But normally they learn their lesson when they can’t come here for a few days.

Can you describe a typical day at the institute?
The kids come here either before or after school.  They have a nice hot meal, they get tutoring to help them with their grades, and then they have the jiu-jitsu training.

What are the benefits of BJJ when it comes to children?
Martial arts help them with their self-esteem, respect, competitiveness. It builds their character into become a better person. Because for these kids reality is something really harsh and cruel.  They live in shacks with no flooring and sleep on the dirt.

What are your hopes for your students?
When you are born really poor in Brazil, you don’t have many opportunities. Big chances are you will end up involved in crimes. When the children start training BJJ, we are giving them a trade.  Something that they can embrace and carry on and eventually become a black belt.  With a black belt on their waist, they will have a whole lot of opportunities. They might become BJJ instructors and provide for their families.

You can support the Kapacidade institute by attending their jiu-jitsu fundraising seminar at the Renzo Gracie Academy in NYC on June 22, or you can donate directly to Kapacidade through their Web site.