Overeem vs Arlovski: A Night of Karate and Crane Kicks 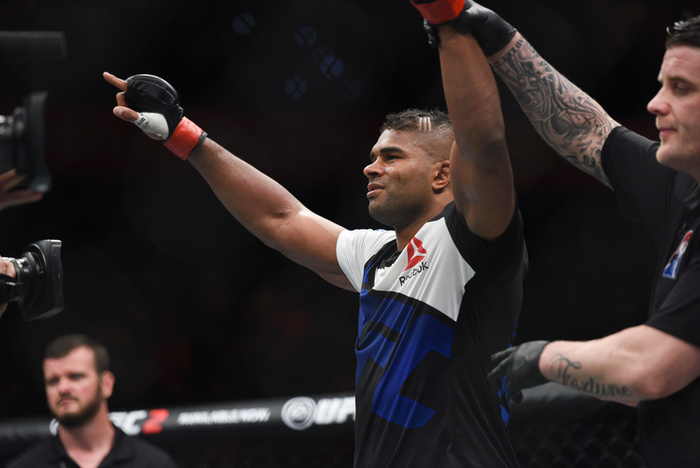 There are two types of heavyweight fights: those that end in spectacular knockouts, and those that end in disappointing knockouts. That is the job of heavyweights, after all, no one is watching them to see the most skilled fighters on earth fight for the full number of rounds. UFC Fight Night: Arlovski vs. Overeem provided one of each of these endings.

The rubbish finish came in Antonio Silva versus Stefan Struve. Silva lumbered forwards, suffered a short right on the chin, and succumbed to elbows as he clung to the lofty Dutchman's leg. This puts Silva at 1-5 with one no contest in his last seven. The no contest was the sole fight in which he showed any signs of durability, but was also the one in which he tested positive for elevated testosterone levels. Silva was brutally stopped with strikes in all the losses. The Brazilian giant is no longer the great ground and pounder who needs to be feared. His pace was always glacial but if he cannot take the blows and isn't able to defend himself either, he is due to hang up the gloves. That being said the only ways heavyweights can leave the UFC are through retirement or death, Zuffa brass won't risk a fighter even as definitively past it as Silva going to Bellator or Japan.

But the spectacular heavyweight knockout? Alistair Overeem's crane kick to the chin of Andrei Arlovski. Arlovski, showing how weird the pseudo-science of 'chin' is, took it surprisingly well. It was the left hook which followed which put Arlovski to the mat, and some effort was necessary once there to procure the stoppage.

And this after I thought I had peaked in excitement earlier in the night when Wade hit Khabilov with one of these:

This fight marked another in the evolution of a thoughtful Overeem. This is the man who has had media tearing their hair out for years because he is the closest thing to a well rounded heavyweight you will see but keeps getting starched in big fights. Finally Overeem is committing to fighting smart and its working a treat. He can kick better than anyone at heavyweight, he can hurt opponents in the clinch with knees and defend takedowns as well as anyone at heavyweight, there is zero reason for him to be focusing on boxing opponents and trading punches as he has so often in the past. Overeem's hands are best when they facilitate his getting in or out and are followed by a clinch or a push away. Punch and clutch as we mentioned in the pre-fight analysis.

Notice in the above clip that Overeem enters with punches, pushes Arlovski back—breaking his stance, his balance, and re-establishing distance in the same way retreating would—and then kicks from range and avoids all repercussions. Aside from getting trapped on the fence in the opening seconds, this was another excellent performance from Overeem. We won't bother looking too much into who he should fight next because you never know what's going to happen in the booking above 205lbs.

The man who would have stolen the show, if the UFC hadn't booked him midway through the prelims, was Kyoji Horiguchi. The entire match showed exactly why the UFC can't get eyes on anyone at flyweight except Demetrious Johnson. Horiguchi, the number five ranked flyweight in the world and a guy who gave Johnson more than a handful on the feet, was matched against the unranked Neil Seery, and hidden on the prelims of a televised card. The match was obviously a showcase match up because the UFC is so reluctant to match top flyweights against each other... so why not have it on the main card?

The fight was a clinic in Horiguchi's karate with some nice additions from his time at American Top Team. Those who have followed Horiguchi since his Shooto days will know that he seems to give up his back for no reason in almost every fight, then attempts to remove his opponent's hooks with his hands before they can choke him. Horiguchi's dangerous habits seemed to be far more under control in this bout which is exactly what you want to see because Horiguchi absolutely lost his bout with Johnson in the clinch and on the mat, not on the feet. Most of Horiguchi's work comes from blitzing in from distance with the one-two, and then either clinching, tripping, weaving, or stiff arming the opponent away. At several points he punched Seery and kept the hand in place to drive Seery off of him before Seery could counter. This sequence sums up just how expertly Horiguchi moved and set up his shots.

Skip up roundhouse to the body, the one-two, the low kick to break stance and the left hook to capitalize. I'll say it again: you should be watching this guy.

The reason I was still excited for this fight in spite of Seery's unranked status is that I have seen Seery take on much, much better fighters and drag them into an even scrap. He is the definition of a 'spoiler'. The kind of fighter who never reaches the big prizes, but who will make the best fighters in the world look very average. Rick Story is perhaps the greatest spoiler in MMA today. At any rate, Seery's head is like a bowling ball, he repeatedly took heavy leather which he couldn't have seen coming from one of the division's biggest punchers, and he'd still land a blow before Horiguchi could exit. It's a rare skill, and not one you want to train for, but it allows Seery to drag better fighters into slogs.

Seery had a few of his own moments too, almost sweep Horiguchi to his back as the karateka dived into the guard with a punch in the first round. And Seery's savviness was on display throughout, as in this nice sequence where he clips Horiguchi on the way in, threatens a throw to mitigate Horiguchi's dominant clinch position, and spins out while connecting a right hook.

Horiguchi did display at points a flaw in the karate style of 'blitzing' that Gunnar Nelson echoed later in the night. In distance style karate, built on the point fighting method, many fighters end their combinations with the rear hand, not blading themselves back to the original position and making themselves a target. If the karateka does this and doesn't a) move his head, b) clinch, c) push off, he stands an excellent chance of getting caught with a retaliatory punch.

Notice here that Nelson lingers and finds himself covering up against a flurry:

Where here he applies perfectly the idea of punch and clutch. Nelson punches and provides a tiny window in which Tumenov can return because he is already crashing in, chest to chest. It is accompanied by that Fedor Emelianenko weave.

An important point about the karate stylists like Horiguchi and Nelson, who close the distance themselves with rushes, is that it is a very labour intensive method of fighting. Compare it to Lyoto Machida in his best days, when he stuck almost entirely to the counter and allowed the opponent to close most of the distance for him. Machida was pretty predictable but he could keep up his movement well into the third or fourth round quite comfortably (provided he hadn't been punted in the legs or body too often), where Nelson's movement at the end of the first round clearly began to slow, before entering the second round fresh again and again slowing down fairly considerably through the round. You can watch the third and fourth round of Nelson versus Story to see just how hittable a flat footed man in a karate stance can be. I cannot help but wonder how well the style of karate wherein the fighter closes the gulf of distance with punches by himself will age as the men applying it slow with age, because it is certainly impacted immensely by fatigue.

Tumenov accentuated this trend in Nelson's slowing feet by immediately doing the smart thing and targeting Nelson's body. Nelson's flank had been pinkened after just a couple of punches. Unfortunately Tumenov's insistance on leaping in with left hooks to do this also betrayed him. As the fighter who should have wanted to maintain the distance, Tumenov gifted Nelson the clinch pretty easily on a couple of occasions.

Tumenov was clearly no match for Nelson on the ground and spent much of round one mounted, and quickly gave up his back and submitted in the second.

Finally a thought for Reza Madadi who knocked out Yan Cabral with a terrific level change uppercut. Set up with some lovely shifting body shots throughout the fight:

As Madadi ducked in under a jab, Cabral bent forwards and ate an uppercut right on the chin.

In principle, Madadi's knockout was similar to that scored the day before by Canelo Alvarez against Amir Khan. Everyone knows the Khan secret by now, his hand speed is blistering and he's untouchable when his feet are working as fast. When he throws the occasional right hand amid his jabs he can startle the finest boxers in the world, but when he starts standing still to throw a third and fourth, Khan becomes a lot more vulnerable. After Khan put together four great rounds against Alvarez, the red haired slugger began to land wide rights to the body underneath Khan's jab which slowed him.

Shades of the man himself, Roberto Duran—king of the wide right.

In the sixth Canelo dropped his level, Khan dropped his hands, and Canelo's right hand came across the top for a one punch knockout.

A terrific weekend of fights and its only going to get better with another GLORY card, a UFC card, and a Bellator card next weekend!