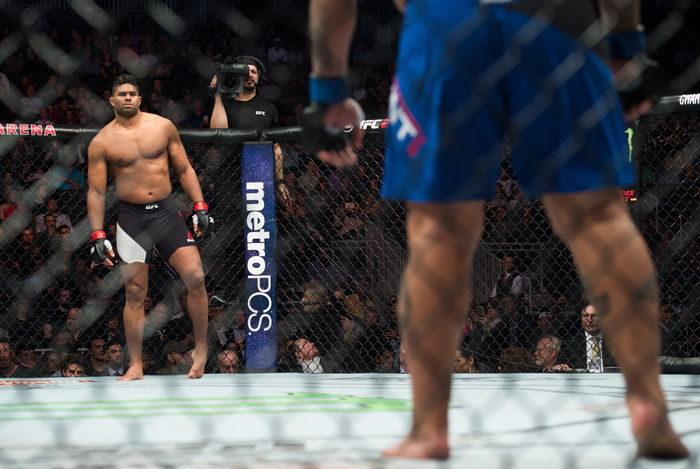 UFC 209 was an unlucky night for the UFC’s management: they lost their co-main event (which many were buying the card for and which was vital in their advertising of Conor McGregor’s next opponent) and their main event stunk up the joint. But it wasn’t all a joyless slog, there were some decent finishes, some slick transitions, some neat set ups, and a few good scraps. Opening the main card was a fight which could have easily headlined a televised event: Alistair Overeem versus Mark Hunt. It was not so long ago that many thought Overeem should call it a day on his career. When he was getting knocked out every other performance and fighting in ways that underplayed his many abilities. Against Hunt, however, Overeem not only looked sharp and thoughtful, but uncharacteristically durable.

The bout took a peculiar turn from the start as Hunt came out kicking. Always a powerful kicker, Hunt has often been reluctant to let go with his kicks even in the kickboxing ring. The bizarre twist was that on the third or fourth good kick that Hunt threw, Overeem attempted to check and Hunt’s shin dinged off Overeem’s to produce a deep gash in Hunt’s kicking leg which poured blood throughout the bout. Between the first and second round there was much debate over putting Vaseline on the cut—this is the standard treatment for cuts on the face but applying Vaseline to anywhere else on the body could and probably should be considered greasing as it will lubricate that surface during grappling exchanges. When Rob Kaman famously split his shin open, his corner taped it up and he set to work kicking his man in the next round. At no point did Hunt stop kicking with the leg though, painting Overeem’s shin and elbow with blood.

Here Overeem returns with the bicycle kick to the midsection.

Few fighters have gone through as many recognizable shifts in focus and strategy as Alistair Overeem. The current model, dubbed ‘Econoreem’ by fans for his judicious striking, has seen Overeem begin to leverage all the things that make him special as a heavyweight. In a division of sloppy giants, Overeem probably has the most tools of anyone, but has always been hindered by poor decision making and fragility under fire. Avoiding all blows is impossible, but there are ways to make it considerably harder to land clean power blows, and almost impossible to land consecutive blows. What Overeem has always needed is to focus on being, as the old saying goes: “All the way in, or all the way out.” This was especially true against Hunt who, as a fighter who uses almost exclusively his punches to get the job done, is only effective in that middle area.

Out in the open, Overeem was able to slam in his kicks and his variety was the story of the long distance exchanges. The front snap kicks which Overeem picked up a year or two back were effective in winding and slowing Hunt while occupying the centre line and not offering Hunt the chance to dash in so easily. These were paired up with the oblique kick / chasse to the knee, thigh and occasionally the hip joint or stomach as Ricco Verhoeven loves to do. This was a technique which forced Hunt to stop in his tracks rather than continue to step in on Overeem after taking the kick.

The other side of this two-part gameplan was closing in on Hunt when he advanced. Alternatively picking Hunt off at range and moving away, and stepping in to smother him, Overeem was not only able to stifle Hunt’s blows but also to frustrate him. Overeem’s knees have always been the best in mixed martial arts and so when he smothered Hunt’s hands he was still able to work with one of his most dangerous weapons.

A nice bit of punch and clutch, the Emelianenko special.

When Overeem did use his hands, it was in well set up counters and leads. Circling off and trying to lance in a southpaw left straight as Hunt followed. Or attempting to cross Hunt’s jab from an orthodox stance. The cross counter (a right, straight or looping, across the top of the opponent’s jab) has always been one of Overeem’s best strikes and he uncorked a couple of decent ones against Hunt as Hunt attempted to close buffer zone of distance Overeem had placed between them.

And so this was the gameplan boiled down to a single moment—retreat and step off line at distance, smother when necessary:

But Hunt showed a little veteran savvy, dropping his head below Overeems and projecting the top of his skull when Overeem stepped in to clinch. In wrestling the head block is one of the first lines of defence against a shot, but in boxing the ‘nodder’ has always been a great way to turn back aggression and stun or cut a man without even landing a punch.

Hunt also showed a willingness to utilize elbows when Overeem was threatened to smother his punches. Hunt’s counter elbows as Overeem stepped into clinch were among the sternest strikes thrown in the bout.

Hunt also showed beautiful elbows as he circled off the fence. Not only do these often allow the circling man to pummel straight into an underhook and reverse position on his distracted opponent (as in McGregor – Diaz II), they punish a man who simply wants to hold. Overeem’s arms were in no position to guard against the elbow as he reached to keep grasp of the circling Hunt.

The end came as Overeem utilized his knees against the fence in the third round and it made an excellent case for developing decent flexibility as a heavyweight. Among many fighters there is the belief that the opponent’s posture must broken in order to knee him in the head. If you look at some of the best fighters at landing their knees from the clinch—particularly Demetrious Johnson—you will notice that it is more often a case of bringing the knee up to the target. A fighter who can comfortably put in knees up by his own shoulders has a great advantage in striking from the clinch.

Overeem had six inches of height on Hunt, but the hurting knee still came in at a height you won’t see in the heavyweight division and Hunt’s posture was only momentarily flexed by Overeem’s grip. Any heavyweight who could bring knees up to the head of an upright opponent in the style of Demetrious Johnson or Masaaki Noiri could have some fun in that weight class.

This was a great showing from Overeem but certainly not flawless. He still has his issues and the elephant in the room is that turning and running. Every time this comes up, this writer’s opinion will be the same—turning the back is not illegal in mixed martial arts, it is down to the other fighter to show why this style of angling out can be so disastrous. Nate Diaz threw away a fight by pointing at Conor McGregor and expecting an appeal to his masculinity to do something instead of effectively cutting the ring and pushing his advantage. You could call the running a show of cowardice, but everyone who has done it in the UFC has turned around and gone right back to fighting after they have repositioned successfully so that argument doesn’t hold much water.  The more interesting point of the Overeem – Hunt fight was how they got there. One of the few feints Hunt showed in the fight had Overeem hit the fence too early and desperately trying to get out of dodge while Hunt was standing directly in front of him, ready to react and swing either hand.

The more pressing issue was Overeem’s retreat to the fence and covering up along it. He did a decent job of waiting it out and trying to snag a clinch in the breaks, but covering up along the fence should never be anything but a momentary last resort. Overeem seems to stay there until his opponent tires, knocks him out, or the round ends.

After his loss to Stipe Miocic in a title fight last year many were struggling to see what was next for Alistair Overeem, but it was a fight in which he hurt the champion and came inches from the belt himself. Certainly Overeem has taken enough head trauma to worry anyone, but in terms of technical ability and physical talent he remains one of the best that heavyweight MMA has ever seen, he isn’t quite in the sad twilight of his career in the way that say Andrei Arlovski is. While the perfect example of a glass cannon, it would be fascinating to see ‘Econoreem’ the upcoming heavyweight contenders such as Derick Lewis and Francis Ngannou.

The Future of the UFC's Welterweight Division Makes No Sense