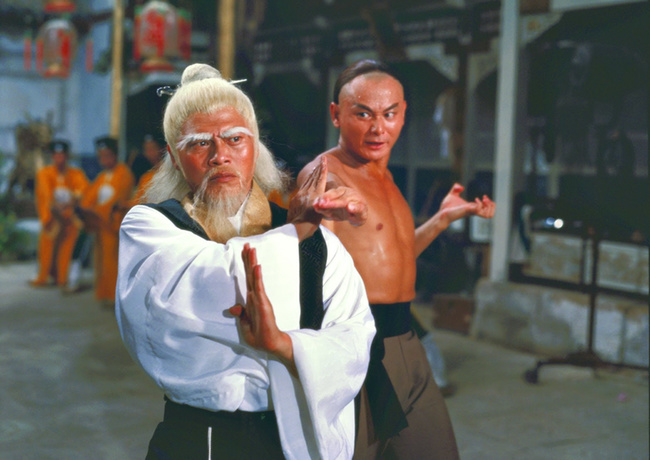 Truth becomes story, story becomes myth, and myth becomes a Shaw Brothers kung fu flic. In Fist of the White Lotus, one of the most ruthless, most invincible bad guys in the kung fu pantheon is re-cast to kill a number of Shaolin monks, their friends and family, and deliver some of the greatest kung fu smack talk ever while he does it.

The villain is Pai Mei, “White Eyebrows,” one of the legendary Five Elders who escaped the burning of the Shaolin Temple by Qing Dynasty forces. If we weave a few of the many legends surrounding this figure together, then Pai Mei is the man who helped form the White Lotus Clan, lead a rebel army against the Qing, betray the rebels and the Shaolin monks to the Qing, kill a number of would-be assassins and avengers, help train several different teams of deadly assassins over the centuries, pluck eyeballs out, and eventually succumb to a poisoned portion of fish head soup.

All the stories agree: Pai Mei’s kung fu is incredible. He can make himself as light as a feather, a single strike can kill, and the standard weak points on a human—throat, eyes, balls—are not only iron on Pai Mei: they are weapons. He uses his powerful inner thighs to break arms, his throat to break swords, and his eyes to break hands. His qi is strong enough to deflect almost any attack.

He likes to stroke his wispy goatee and insult his weak opponents during a fight. Only a perfectly administered combination of styles can defeat him. Pai Mei is the video game end boss you die against for a full summer until finally figuring it out (with the help of a cheat code) just before school starts, when no one is around to confirm the kill.

The Pai Mei introduced in the Shaw Brothers film Executioners from Shaolin and then re-visited in Fist of the White Lotus is basically the same Pai Mei Quentin Tarantino showed us in Kill Bill. Pai Mei in Tarantino’s film was played by Gordon Liu, the same man who plays Hong Wei Ting in Fists of the White Lotus, the young avenger who gets beaten down repeatedly, enduring White Lotus smack talk and even these lines from the female lead in the film:

The original White Lotus Clan was a Buddhist society that rose up in the 1300s in opposition to Mongol rule. They were a millenarian group, spiritual and fanatic, opposed to foreign domination and willing to take up arms.

Scattered protests throughout China during the late 1300s developed into a full scale rebellion led by an ex-monk from southern China named Zhu Yuanzhang. The Red Turban Rebellion swept across China, from Guangzhou north to Nanjing, and then across the plains and down the rivers until the whole Mongol system was rolled back and annihilated. Zhu Yuanzhang took the name Hongwu, and founded the most powerful empire of its time, the Ming Dynasty.

For centuries afterwards, the White Lotus Society would be tied to rebellions and uprising, zealous movements and the martial arts. Several rebellions during the 19th century were linked, by the government or by the rebels themselves, to the White Lotus.

Popular myth formed around the the society. The White Lotus supposedly survived throughout the centuries as a martial band of spiritual guardians, half-Taoist half Buddhist, whose sole purpose was to ensure Han Chinese rule over the motherland. Both the Ming and later the Qing saw the White Lotus boogieman wherever rebellion and dissent sprung up.

The White Lotus myth lives on today through the Triads, the southern Chinese mafia currently flooding the country with meth from Mexico and helping corrupt officials party their ill gotten funds away in the city-state of Macao.

The leader of this ancient clan of spiritually-minded martial artists and rebels is Pai Mei, the undying, immoral kung fu master willing to slaughter an entire monastery for getting looked at wrong.

In Fists of the White Lotus, Pai Mei is actually the classmate and twin of the Pai Mei slain by Hong Wei Ting and his partner, Wu Ah Piao in Excutioners from Shaolin. The new Pai Mei learned of Ah Piao’s release from prison and ambushes him at his home. After a fierce fight with White Lotus minions, Pai Mei appears, flicks his wispy beard and dominates. Hong Wei Ting spends the rest of the film trying to gain revenge. His first and second attempts end badly. Just before he turns tail and runs the first time, Hong Wei Ting has to endure this line from the White Lotus master:

“Hong Wei Ting, you must be out of your mind to try and fight me with your childish crane style. You can go join your friend Ah Piao in hell for lessons!”

Pai Mei laughs at his opponents throughout the film. “You have no chance!” he tells them, while standing upright and effortlessly moving out of the way. It is only after several beat downs and humiliations that Hong Wei Ting is finally taught a new style, “acupuncture kung fu,” and finally defeats the great master.

It’s interesting that Hong Wei Ting is unable to defeat Pai Mei until he learns the a feminine kung fu style. The ladies in Fists of the White Lotus are the ones who eventually beat the old master and in Tarantino’s film it’s the ancient womanly weapon of poison that finally does him in. Watching the original Shaw movie versions helped me appreciate Tarantino’s devotion to the myth and his ability to take the story further in a seamless, symbolically consistent way.

Still, nobody watching this film believes that Pai Mei is actually defeated, least of all Quentin Tarantino, who resurrected the amoral master to humiliate and and then train Beatrix in Vol. 2 of Kill Bill. The first we see and hear of Pai Mei in Tarantino’s film makes us believe he has been sitting in the mountains training and flicking his beard for centuries, growing more ornery as the pathetic kung fu of bad students and deluded avengers piles up.

I asked a few old school kung fu guys which old Shaw movie they liked best, and the majority of them mentioned films inspired by or starring Pai Mei. It makes sense. If you were a kid in the 1980s and went to see a kung fu flic, few masters could have made a stronger impression than Pai Mei the Cruel. Not only was his style invincible, but he had the look, the swagger, and the insults.

The smack talking never stops when he shows up on the scene. I found myself skipping forward through Hong Wei Ting’s training sessions and his prelim fights with minions just so I could get another dose of Pai Mei being an ultimate badass. Shooing away armies of minions with a flick of his wrist, dominating his opponent with a sardonic smile, displaying feats of prowess just to demoralize fools.

In the end, everything Pai Mei did after leading White Lotus rebellions and tossing out invaders was just a bit of entertainment to carry him through the centuries.

The Five Venoms: A Morality Tale for the Ages