Peace Through Fighting (and Tattoos) 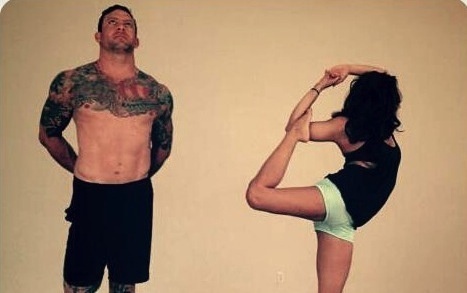 To look at Todd Vance, you might think he was just another pissed-off punk rocker who reluctantly grew up, but you would be wrong. After enlisting in the Army in 1998, the San Diegan worked his way up to sergeant and was deployed to Iraq after the 2003 invasion. Vance’s combat experience triggered a near unraveling of his mental well-being, so when he returned to the U.S. in 2005, he began training and competing in MMA, using one form of fighting to help anesthetize the psychological fallout from another. Since 2010, Vance has led the nonprofit Pugilistic Offensive WarriorTactics (P.O.W.), a free, veterans-only MMA training program that meets three times a week and serves as a gateway to help military men and women deal with combat-related stresses. And now, thanks to the work of tattoo artist Dan Pryor and others, Todd Vance wears his heart on his half-sleeves.

Todd Vance: Back in the day, in North County San Diego, there was a little community called the Tortilla Flats where a lot of Mexican kids lived, and they’d always jump me while I was riding my skateboard back from school to my home. I got tired of it, so I signed up for kickboxing at the Y. I took to it and did pretty well. Before that, my mom was struggling because she was single and had started to see somebody, and I was kind of a handful. She figured if she could put me in a gym, keep me busy, and know where to pick me up at night, it was a win-win.

Especially as a teenager, I had a real bad, short attention span and a lot of anger—I was just like an agro teenager. In Muay Thai, I didn't have to think about philosophy and kiss ass and sit there for 20 minutes. I could get in there, wrap my hands, punch a bag, spar, listen to some good music, and bounce.

For me, tattoos started off as something super deep: things I knew I would never outgrow, things that have a deep meaning. Then as the years went on, they decreased from that into something that was more of a theme that I’m into or a look that I’m into—having it look good on my body as far as placement goes. But the journey in the middle, between back then and now, the tattoos tell a little bit of my story as far as where my mind was.

I was 18 and three days or something like that when I got my first tattoo. My birthday is June 9, I graduated high school on June 12, and I left for Ireland on June 15, and I wanted to make sure I got it before I left. I’m third-generation Irish. That was the lion and the shamrock on my left shoulder.

Tattoos were always on my mind as a teenager. But my mom wasn’t too happy when I got my first tattoo, and she didn't wanna see it. Every time I came over, or if we were going to the beach, she wanted me to cover it. And as I got more and more tattoos, I had to buy baggier shirts—they started creeping down lower and lower. My mom would ask, “Oh, is that a new one?” And I’d tell her, “No, I’ve had that one forever.” She didn’t know the difference. After a while, there were so many.

My grandpa on my mom’s side—he was my grandma’s boyfriend of 20-something years--he was Jewish and she’s Irish-Catholic, so they couldn't get married, but they were life partners, so I considered him my grandpa. He was a boxer from Philly, a real classic old-school guy with the comb-over and the short shorts. And I was a bad kid. So when I would run around breaking stuff, he’d grab me by the scruff of my neck and show me his little scarred-up, bony hand, and he’d tell me, “You keep messing around, I’m gonna give you a knuckle sandwich right in the kisser.”

So the next tattoo I got was a knuckle sandwich…I went to the guy who did my tattoos at the time, and he was like, “What, with like a bun?” And I said, “No, I think Wonderbread would look better than a bun. I don't want it to be like a knuckle burger.”

I had always looked up to the military. I had always been, for lack of a better word, patriotic—not in the sense of bald eagles and flags waving and Wal-Mart, but in the sense of duty to my country and as a citizen living in a place where we can wake up and not have to worry about getting blown up on a daily basis.

On both sides of my family, all the males have been in the military. When I was a kid, my dad showed me my family tree and he traced it all the way back to the Civil War. Every family member on my dad’s side had been in the Marines except for my dad, who was in the Army in Vietnam. On my mom’s side of the family, her dad was one of the original members of the OSS, which turned into the CIA. I had that legacy in my blood.

I was stationed at Fort Lewis in Washington before we got deployed. I had gone to my tattoo artist up there for some other stuff, and he tattooed meat tags on all of my squad for free.

Meat tags developed in World War II, when the Airborne guys would do drops. A lot of times, when they got shot down, they couldn't identify who was on what plane or where their body parts were or whatever, so there were a lot of missing-in-actions. And because of this new war in Iraq, with all the IED stuff, the same sort of thing started happening. But then they started to notice that the body part that was left in the vehicle wouldn’t be burnt up because of the Kevlar vest, so we put the tattoos on our ribs underneath our armpits. It’s just your name, your social security number, your blood type, and the way you want to get buried.

Sailor Cam did the bombs dropping on my arm, two swallows, and a razor-and-brass-knuckles piece. If you listen to Agnostic Front, they did a split with Discipline that had a sacred heart with sledge hammers—I got that with the words “strong and proud” as a banner on the inside of my arm. I had nothing to lose at that point—that’s why I got so many tattoos right before we left, I guess. I figured, “What the hell, I might not make it.” 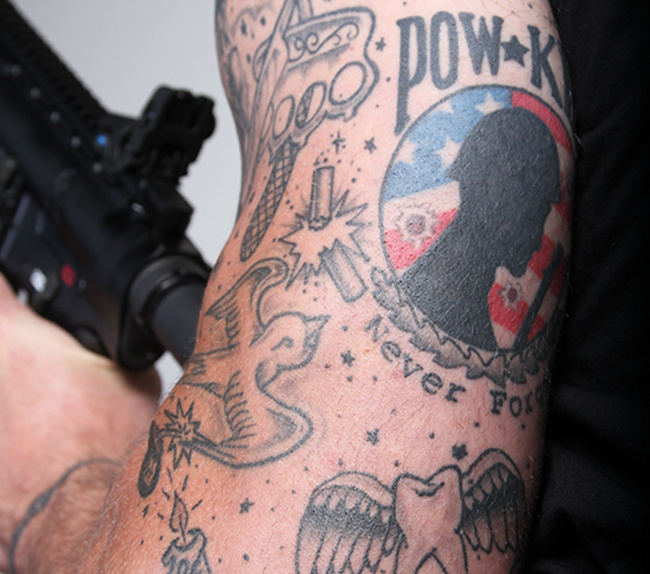 I got back from Iraq in 2005, and for about three or four months, I was great—just partying nonstop pretty much, going to the beach, having fun, celebrating being alive. Then I realized that life is still gonna keep going. That’s when all the stress from deployment kind of caught up with me.

I never really slept at night. I was awake tossing and turning, or I’d sleep and have really bad nightmares and not fall back asleep, and then I’d have anxiety during the day. Walking down the street or going to the store—I’d try to do all that stuff at night or during off-peak hours so I wouldn't have to deal with people.

You feel like nobody gets you; you feel like you’re totally different than everybody. You feel dangerous--kind of scared of yourself, what you could do to yourself and what you could do to other people. You’re drinking too much, blacking out, getting into street fights like every weekend—just not a good, healthy, positive lifestyle. That’s not every soldier’s case, but for me that’s how it was for a while.

I got the FTW (“fuck the world”) tattoo pretty much right after I got home to San Diego—it’s right underneath the “strong and the proud” sacred heart tattoo. And at that time, I really didn’t give a fuck. My mentality was me against the world—nobody got me. It was like I had done all this stuff, and nobody gives a shit. 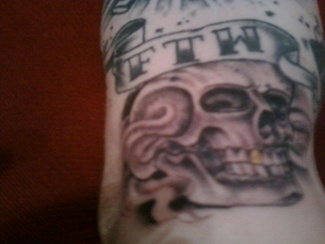 I was doing concrete by day, and the guy I was working with was one of my buddies that I used to get in street fights with. And he was like, “Dude, you’re so good at fighting; you should just fight MMA.” So we both found an MMA gym, and we got off early enough that I could train with the pros at 3 o’clock.

My first team had UFC champion Dominick Cruz, Rolando Perez, War Machine—all these big names--and most of them came from wrestling or jiu-jitsu backgrounds. The only day that I’d have fun would be on Tuesday because it was stand-up sparring day. The rest of the week I was getting taken down and smushed up against the fence. But it did force my game to improve exponentially.

A lot of times, you don’t even know what’s wrong—you don't even know what your issue is. But you’re unhappy, or you’re sad or depressed. And you can’t find the words to tell your significant other or family member, so that adds a layer of frustration. But when you go to the gym, you don't have to talk to anybody—you can just wrap up your hands and do your thing, go hard and take it out on the equipment or have a good hard sparring day. And sometimes the solution presents itself through that hard work.

Guys don’t want to tell their chick that they’re gonna go see a therapist or try to get out of work early and go to group therapy and talk about feelings. Even if they are cool with it, they might not wanna do that activity because it’s boring and it’s draining. But with Pugilistic Offensive Warrior, they can look forward to training three times a week with people that have gone through the same stuff as them and faced the same challenges coming home. There’s a lot of stuff that doesn't need to be said. When you’re around your brothers, you work through stuff without even having to talk.

My guys all end up clicking. They all hang out and I don't even know anything about it—they meet up and watch fights and go have dinner or have barbecues. And that's exactly what I want. The apex of the group therapy model is when the facilitator doesn't even have to get involved except to open and close the front doors.

My life really did shift from doing concrete, fighting MMA, and beating up drunk people every weekend to going to school, expanding my knowledge, training hard but from a different mindset, and taking control of my whole life. So I got the letters PMA (“positive mental attitude”) tattooed on my knee so I could always see it—I’m always wearing shorts. 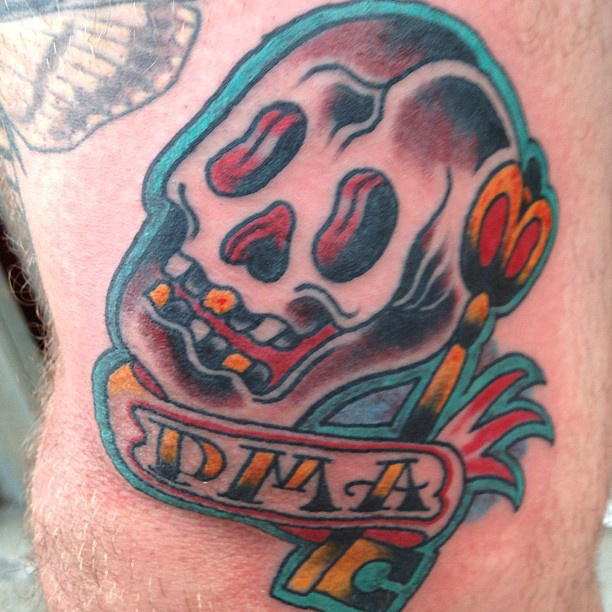