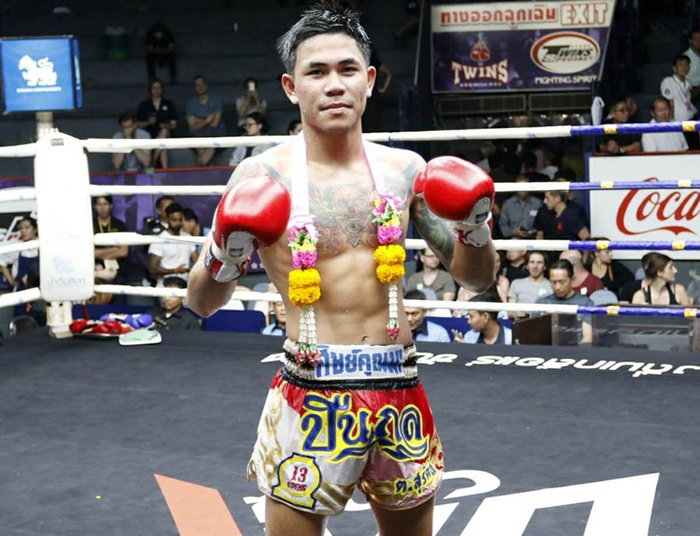 Crush of bones and clash of limbs, fighting till their nerves go numb and the human ego gets broken; Muay Thai is a highly competitive bloodsport.

Win, lose, draw or disqualification, the show goes on and fighters keep on slugging till the fat ref sings. It’s a permanent state of war waged in the name of good sportsmanship, you see.

Yet in a professional sport with so many distinguished talents, so many celebrity match ups, such a high volume and turnover of thrashing blows, week in and week out at the big name stadiums of Bangkok, undefeated pugs, with gleaming Floyd Mayweather style records, and porcelain egos wary of defeat, are next to non-existent. In a human cockfight with so much action, what’s really rare is an elite level fighter on an uninterrupted double-digit winning streak.

One such nak muay (Thai kickboxer) is Pernkun Tor Surat, a machine gun southpaw who fights out of 13 Coins Gym in Bangkok. Undefeated in his last 12 bouts, and flying high on a glorious run of victories dating back to 2015, Pernkun is the 19-year old king of the ring right now in Thailand. Period. 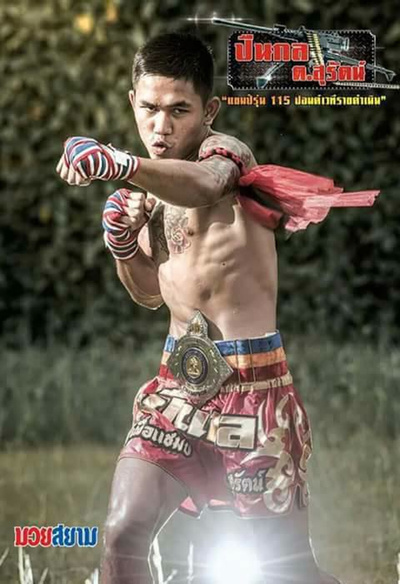 And he’s no upstart talent. Pernkun’s a young war god with a lot of respectable cheerleaders. The eight-limbed teenager is the current Rajadamnern Stadium champion at 115llbs and a stud much feted by the fat pimps and ringside potatoes of Thailand’s kickboxing establishment. In 2016 he was voted “fighter of the year” by the Thai Sports Authority and word is that he’s up for another gong next month from the inky pens of the Sports Writers Association of Thailand. With 12 wins out of 12, and fighting anywhere between 112 and 117llbs at short notice, right now Pernkun’s the big fish, top dog and A-Number 1 talk of the town.

It’s been a visceral and thrilling 14-month campaign for the boy wonder but it’s also been the evolution of a class act. Take Pernkun’s twelfth victory last Thursday night at Rajadamnern Stadium in Bangkok. Hard working and businesslike, Pernkun cagily boxed behind a tight guard and dominated the formidable Prajanchai over five rounds to get the nod from all three Thai judges at ringside (who scored the contest 49/47 in favor of Pernkun).

Backstage, after the bout, there was a moving display of fraternity between Prajanchai the loser and Pernkun the winner. Instead of bitching to the attendant media after the loss, Prajanchai smiled like a Cheshire Cat and raised Pernkun’s arm to salute the glory of his victory. So much respect and peaceful coexistence. At times, the eight-limbed art is a beautiful thing—with none of the impotent anger and trash talk that you see and hear in other professional combat sports of note.

Do they exist in a universe of good sports? Maybe it’s a cultural thing. In Thailand, and pretty much everywhere else on Planet Earth, everyone loves a winner. A sportsman on a winning streak is a lucky charm made flesh in the Kingdom of Thailand. You rub him, or strike him with a wad of money, and maybe some of that luck might rub off and win you the next lottery. That’s the way it plays in the land of the smile. Lucky is good. Lucky is great to be around. Some of it might even come your way.  But what about that run of wins for the machine-gun kid with the crazy tattoos? Is it luck or the product of good old-fashioned Muay Thai ring craft? Perhaps it’s a fortunate combination of the two.

Pernkun’s fight record since late 2015 is a veritable trophy room of boxing heads. It all began on the December 28th of that year with a climatic fifth round KO of Petheveda at 113llbs. Not one to rest on the laurels of a solitary demolition job, Pernkun went on to outpoint Petmunangchon in two consecutive 112llb bouts in January and March of 2016. And there was to be no let up on the New Year fight calendar for the skinny kid with the pickax shins and cheeky uppercuts. Floating between 112 and 115llbs, he mugged Suriyanlek on points in April and followed suit with Roycheung in May and Prajanban in June.

What game assed, on-the-scene pro, or divine power could break this uninterrupted tally of wins? Step forward the brawny figure of Phichitchai from Saenchai’s gym of ring assassins. Unfortunately, just like his noble and dangerous predecessors, he lost his July match on points to Pernkun… and the September rematch.

Could the pugnacious figure of Gingsanglek rout the precocious teen titan? Not bloody likely. He lost on points in their first outing in October 2016. Their rematch, however, was interrupted by a 117llbs bout with Kumandoy in November. Once again, Pernkun, a tough-minded opponent with a tactical head on his shoulders, boxed clever and won the stormy contest on points.

When Pernkun met up to tango with Gingsanglek for a December rematch at 113llbs, a hefty knee to the midsection in Round 4 of the contest derailed Gingsanglek’s battle plan. Despite the run of points victories throughout the course of 2016, it was an end of year reminder to the dorks and critics at ringside that Pernkun is a yodmuay, a dangerous knee fighter with pump action thighs that make big holes.

But it was Pernkun’s defeat of Prajanchai last week that ended a 14-month period of high profile robberies that confounded expectations and rejuvenated the Bangkok boxing scene. On a permanent state of operational readiness, ready to fight at short notice, an obscure kid from the boondocks of Thailand has become a serial bogeyman in Bangkok. With the concentrated certainty of a brain surgeon, and the playful glee of a schoolyard bully, Pernkun has dispatched all of his challengers to the wings to lick their wounds and revise their strategies.

Will this high profile talent stretch the run to 13 victories for 13 Coins Gym? Or will the next bout be unlucky number 13? However you see it, it’s been an aeon since Bangkok’s elite Muay Thai scene had a fighter on a streak like this. Win, lose, draw or disqualification, the wheel of fortune in this highly competitive power structure keeps turning. And the show goes on till the fat ref sings.