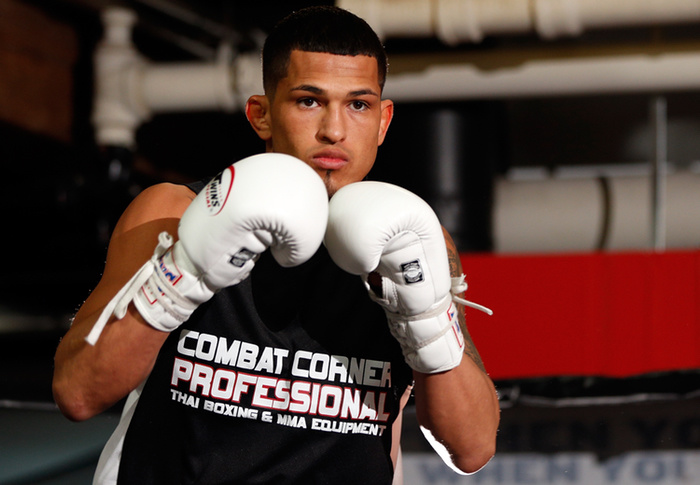 We are all getting excited for T.J. Dillashaw versus Dominick Cruz, and rightly so, but flying ever so slightly under the radar is the card's co-main event. Anthony Pettis and Eddie Alvarez are two of the best that the lightweight division has to offer but seem to be largely overlooked because of a 'been there, done that' mentality on the part of fight fans.

Anthony Pettis looked unstoppable in taking the belt from long time champion, Benson Henderson, and in his first title defense against Gilbert Melendez. But the repeated injuries and being tied up with The Ultimate Fighter kept us from seeing Pettis for long periods. When Rafael Dos Anjos came in to challenge Pettis he thoroughly drubbed the champion through five rounds of exquisite ringcraft and pressure and suddenly it was as if Pettis' last two or three fights had never happened. He was the subject of ridicule for a while and now he's finally back to fight Eddie Alvarez.

Eddie Alvarez, meanwhile, came into the UFC as the hottest prospect outside of it. Alvarez was matched with Donald Cerrone in his UFC debut and after wobbling the typically slow starting Cerrone in the first round, Alvarez was undone by Cerrone's excellent work with kicks and knees to the legs and body. A split decision victory in a rather tedious affair against Gilbert Melendez did little to raise Alvarez's stock in the eyes of the public.

There was a feeling of “Oh, so he isn't all that” when both Alvarez and Pettis lost after fans had been hearing for so long what excellent strikers both were. I don't give a tuppenny damn where a fighter sits in the rankings or who the UFC is marketing as an unstoppable force of nature this year, my job is to point at beautiful aspects of the game no matter how flawed the fighter demonstrating them is otherwise. Alvarez and Pettis were done in by beautiful gameplans, no shame there. But as strikers, doing things that other mixed martial artists either cannot replicate or do not know about, they are most certainly all that and a bag of chips.

Pettis, for starters, is one of the most skilled kickers in the game, and not in the power kicking basic Muay Thai sense. Kicking is by far the slowest method of striking. It's the longest, but that also means more distance to travel and more time to recognize and react for the opponent. So several methods have been proven over the years to increase the odds of scoring with kicks. Assuming that we're not going to go the pure Muay Thai method in which top level fighters will happily kick whatever gets in the way of the target and hurt that instead. That strategy isn't particularly popular in MMA due to the element of risk brought with each kick, though you can see Shinya Aoki utilize it against Vitor 'Shaolin' Ribeiro ... if a Shinya Aoki striking clinic sounds fun to you. Guys want to score kicks clean or not throw them.

The most popular method in MMA is to combination punch into kicks. This is the classical Dutch method and has proved successful in MMA for every great kicker from Donald Cerrone to Jose Aldo.

Another method which isn't so useful in MMA but is tremendously valuable when kickboxing is low kicking in time with the opponent stepping in, because you know he can't check with the foot he is stepping onto. Ernesto Hoost was the master of this. Though in MMA, once again, you don't want to be on one leg with the opponent advancing on you and nothing in between you.

In the first instance the kick is hidden by the combination. In the second the kick is scored by timing the opponent at a time when they cannot check it. Anthony Pettis' method is to eliminate any telegraph on his kick and to provide a double or even triple attack in his high kick / middle kick / rear hand straight play off. But one of the most important aspects of the Pettis kick, as he refuses to take a step, is being in control of his pivot on the standing leg. It's got a long way to go from slightly turned in to facing almost behind him to open up his hips to kick all the way though. Take a look at this beautiful round kick against Benson Henderson:

And now again, focusing on Pettis' heel. He has removed his obvious telegraphs, but there is still a preliminary motion—his heel comes in to cut down on the pivoting needed to kick. Sneaky and neat.

So in control over his pivot on the lead leg is Pettis that he can throw up kicks from very unusual spots. For instance, as he circled to his left (fighting southpaw) against Joe Lauzon, he threw up a high kick from an inside angle. Most MMA fighters can't kick anywhere near comfortably—especially head height—without stepping to open their hips and then pivoting the rest of the distance.

Not to mention that Pettis has some of the most under-rated boxing in the division. Like his kicking game, it's minimalistic, but built around good timing and movement. When he's out in the open or on the front foot, he's marvelous with his one-twos, and lit up Donald Cerrone with his hands long before he landed the winding body kicks that ended the bout.

The downside is that Pettis cannot control his distance when he is crowded along the fence. The long stance is squashed down by proximity to the fence, and Pettis is left pumping out one-twos and throwing up the occasional, ill-advised high kick which Rafael Dos Anjos stepped inside of all night. That being said, Dos Anjos worked marvels in that fight with his pressure and his discipline. Gilbert Melendez attempted to crowd Pettis and just walked onto punches in the process.

Eddie Alvarez, meanwhile, could always hit and take a punch but his work to improve his boxing over the last few years has been tremendous. What Alvarez does so well, which every other fighter in MMA could learn from spare Frankie Edgar, is use level changes to create openings. His right hook to the body often leads to work upstairs and he shares some interesting similarities with his former teammate, Frankie Edgar.

Alvarez has also had tremendous success with a darting right which he tells me he learned from Bernard Hopkins. Against Pat Curran, whose defense has always been impeccable, Alvarez used this unorthodox strike to take the victory. Against whichever one of the confusingly named Pitbull brothers, Alvarez used these rights to get Freire ducking, then kicked him in the head for a spectacular knockout.

Though where Edgar uses to his level change punches in tandem with his takedowns, Alvarez can look a little predictable after a round or two of lunging in with the right hook to the body. Donald Cerrone met him with knees and a nice intercepting kick:

And Gilbert Melendez was able to intercept him with some meaningful elbows:

Part of this is that Alvarez is attempting to get into range to box, as one of the shorter men in the weightclass. In many ways Alvarez reminds me of Fedor Emelianenko—he has fantastic power and can work well with his hands, but he has these excellent kicks that he is so rarely using. He damn near broke Roger Huerta's leg on the first one he threw and when he finally threw them against Gilbert Melendez the variation in attacks saw his boxing become more efficient too.

In terms of ideal gameplans, you would expect me to say Alvarez should crowd Pettis. Certainly Alvarez can take a man down if he needs to, but chilling out in Anthony Pettis' guard is not a great move for anyone who isn't a smothering top player. I would actually like to see Alvarez kickbox with Pettis, on the front foot, but focus on those short, punishing low kicks in retaliation to every kick Pettis throws and just whenever there is a chance otherwise. Pettis a great kicker, but not unkickable—Henderson and Dos Anjos both landed hard kicks on him on several occasions, often getting off scot-free). The use of low kicks to upset Pettis and put him off of kicking would open the door to step in with the body shots. Alternatively, Alvarez could catch and pitch on the body shots like his teammate Tyrone Spong did so effectively against Nathan Corbett. That would be a joy to watch and we know that Dos Anjos' bodywork severely upset Pettis. It is a lot harder to throw up split second high kicks with a bruised abdomen and little gas in the tank.

For Pettis, who is probably expecting aggression after being shown to be so vulnerable under pressure against RDA, I would like to see straight kicks. Round kicks are a terrific hurting weapon, but straight kicks put a whole limb in between the opponent and the kicker. You can step in on a round kick, or take it on the forearms or shins and then step in to hit. Doing the same with front kicks is much more difficult. Katsunori Kikuno showed how irritating they can be for Alvarez in the past, though Alvarez showed savvy to change things up and take Kikuno down in that bout. If a fighter can land front kicks with any degree of success, he also lays the foundations for a much easier high kick, which we know Pettis is always keen to throw up.

Pettis versus Alvarez stands to be a great fight. Tune in next weekend to watch it and get back here next week so we can talk about all things Cruz versus Dillashaw.