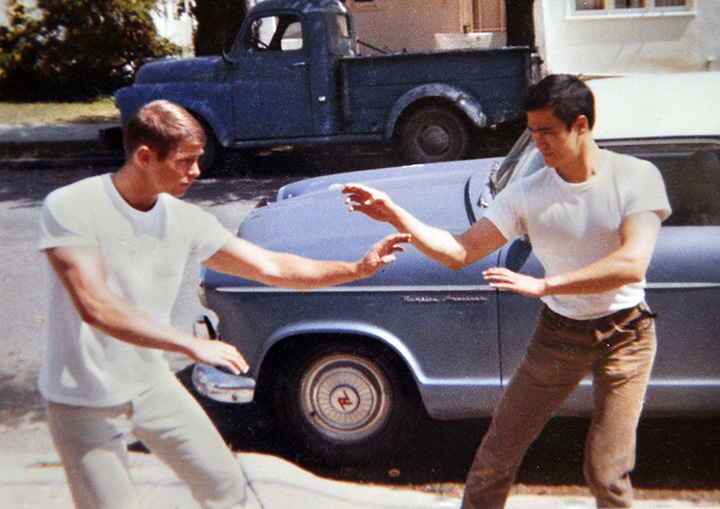 Charles Russo is a San Francisco journalist and contributor to Fightland. His new book Striking Distance: Bruce Lee and the Dawn of Martial Arts in America chronicles the formative days of a young (pre-Hollywood) Bruce Lee as he navigates the heated martial arts proving ground of the San Francisco Bay Area in the early 1960s. The historical photographs featured here (and in the book) reflect the robust fight culture that Bruce encountered, which ran the gamut from Chinatown Tong enforcers to Oakland street fighters. Regarded by the Chinatown masters as little more than "a dissident with bad manners," Bruce's time amid this culture would be both turbulent and formative, involving his legendary high noon showdown with Wong Jack Man as well as his earliest formal constructions of Jeet Kune Do.

A photo of four-month-old Bruce Lee alongside his mother, just prior to his family departing San Francisco to return to their home in Hong Kong in the spring of 1941. Bruce's mother belonged to an ethnically diverse (and highly influential) Hong Kong family. It has been long believed that Bruce's ancestry was a quarter German, yet during exit interviews with immigration officials in SF, his mother stated that she was English on her maternal side. (Document courtesy of the National Archives and Records Administration, San Francisco)

Bruce had been born on November 27th (in the Year of the Dragon, at the Hour of the Dragon) in San Francisco's Chinatown while his parents were in the U.S. touring with the Hong Kong Cantonese Opera. Before departing the U.S., Bruce Lee had his first role (above) as a newborn baby in the film Golden Gate Girl. (Film still courtesy of Sally Eng via Blue Queen Cultural Communication Ltd.)

In the post-World War II era, the San Francisco Bay Area became one of the great melting pots of martial arts culture in the west. In San Francisco's Chinatown this culture anchored around Lau Bun, the Choy Li Fut kung fu master and local tong enforcer who opened one of the very first Chinese martial arts schools in America. (Photo courtesy of UC Berkeley)

Lau Bun with senior students in his Hung Sing School of Choy Li Fut. In the summer of 1959, a hotheaded 18-year-old Bruce Lee would have a little-known run-in with this group. (Photo courtesy of UC Berkeley)

The altar within Sil Lum kung fu master TY Wong's school bore the inscription: "The proper use of the good long fist / Is to punish lawbreakers and to eliminate violence." TY belonged to the same tong as his senior colleague Lau Bun, and played a similar role within the community. When U.S. servicemen on shore leave took to Chinatown's Forbidden City nightclubs, it often fell to TY to curb the rowdier forms of behavior. (Photo courtesy of Gilman Wong)

Master Choy Kam On's family played an integral role in bringing tai chi to the West. Choy taught Yang tai chi for many years around Chinatown, but was also quietly known for having stunning martial abilities. As one student put it, "Master Choy could bend space and time." (Photo courtesy of Jack Wada)

A photograph of Master Choy Kam Mon's tai chi classes at the Chinatown YMCA in the early 1970s. Beginning in the late '60s he began attracting large crowds of young students (essentially SF hippies) who were seeking alternatives to the popular gurus of the era. He billed tai chi as "Meditation in Motion" and developed a huge following to his YMCA classes. Today, Master Choy's students teach tai chi all over the world. (Photo courtesy of Jack Wada)

A young Bruce Lee in Oakland circa 1965, just prior to his role on the Green Hornet. Bruce had a school on Broadway Avenue along Auto Row for a short period of time before relocating it to the garage of James Lee's (no relation) east Oakland home. Although Bruce was born in San Francisco's Chinatown, he was often at odds with members of the neighborhood's martial arts culture. In fact, one longstanding Chinatown master dismissed him as little more than "a dissident with bad manners." Bruce instead found a more likeminded crowd across the Bay, in the city of Oakland. (Photo courtesy of Barney Scollan)

A menacing street fighter in his youth, James Lee embodied all of the blue collar grit of his native Oakland. Beyond his physicality, James was also a brilliant innovator of the martial arts in America. He ran a modern school out of his garage, invented and built his own training equipment, and even started his own publishing company. (In fact, James Lee is the reason why the English vernacular uses "Kung Fu" instead of "Gung Fu.") James embodied the sort of martial arts future that a young Bruce Lee was envisioning. Despite their difference in age, they would develop a close fraternal bond that lasted the rest of their lives. (Photo courtesy of Greglon Lee)

One of Bruce Lee's closest colleagues in Oakland was Wally Jay (right), the Hawaiian jujitsu master who had been teaching in the East Bay since the early 1950s. Wally was just one of several colleagues Bruce found in Oakland that had ties back the dynamic (and often-forgotten) melting pot martial arts culture of Hawaii during the mid-20th Century. Wally's teacher (left) was Seishiro Okazaki, who had emerged from a long line of samurai to be a pioneering and highly innovative figure within the early martial arts culture of the West. (Photo courtesy of Bernice Jay)

Kenpo practitioners Ed Parker (center) and Ralph Castro (right) were key collaborators that Bruce Lee discovered in Oakland, who also had ties back to the robust martial arts culture of Hawaii. (Photo Courtesy of Greglon Lee)

Ed Parker was a visionary for martial arts culture in America. Parker had studied kenpo in his native Hawaii before opening his first school in Pasadena around 1956, where he elicited considerable interest from the Hollywood crowd. Beginning in 1964, Parker's Long Beach International Karate Tournament would be a cornerstone of martial arts culture in America, bringing together a wide range of practitioners from around the world each year. The inaugural Long Beach event in '64 got Bruce Lee noticed by Hollywood, and resulted in him being cast as Kato on the Green Hornet shortly after. (Photo Courtesy of Ed Parker Sr.'s IKKA/KamIV, Inc.)

Bruce Lee with (future Oakland student) Barney Scollan the night before the first Long Beach International Tournament in August of 1964. It is rarely mentioned that a spirited impromptu meeting took place the night before the tournament at a nearby hotel in which many of the visiting martial artists were staying. Dressed in a black leather jacket, Bruce Lee gave a demonstration that slayed the room. Bruce's performance the next day at the official tournament was very different, and came in the form of highly critical lecture against the martial arts status quo. (Image courtesy of Barney Scollan)

Bruce demonstrating his "closing-the-gap" routine the night before the inaugural Long Beach Tournament. This was one of Bruce's main go-to techniques that he liked to showoff during his demonstrations, in which he would emphasize streamlined footwork that would enable him to quickly close on an opponent and then deliver a decisive blow. (This would be Bruce's opening gambit just a few months later in his legendary showdown with Wong Jack Man.) (Image courtesy of Barney Scollan)

"Guys were practically lining up to fight Bruce Lee after his performance at Long Beach," says Clarence Lee, a longtime karate teacher in San Francisco who was a tournament judge that day. This quote runs contrary to the prevailing storyline of Bruce's demonstration at Long Beach in '64, which has long asserted that he merely executed some fancy stunts and came across as so charismatic that everyone fell in love with him. In truth, Bruce delivered a scathing lecture that challenged many of the prevailing practices of the time, leaving those in attendance highly polarized about this unknown young practitioner. As one observer summarized it: "Bruce made a number of enemies that night, as well as a number of followers."

In the late summer of '64, Bruce accompanied Hong Kong starlet Diana Chang Chung-wen ("the Mandarin Marilyn Monroe") on a promotional tour of the U.S. west coast in support of her latest film. This brought them to the Sun Sing Theater, in the heart of San Francisco's Chinatown where Bruce's martial arts demonstration (and critical lecture) nearly resulted in an on-stage brawl in front of a riotous audience. Weeks later, Bruce would face down young Chinatown ace Wong Jack Man in a legendary behind-closed-doors high noon showdown, based largely on comments he made from the stage of the Sun Sing Theater. The fight took place in Bruce's Broadway Avenue school in Oakland, in front of just seven people. (Photo courtesy of UC Berkeley)

Bruce Lee (back row center) with one of his early Oakland-era classes operating out of James Lee's (bottom row, third from left) garage, circa '65. Bruce's time in the Bay Area was was essential to his evolution as a martial artist, yet remains a largely obscure period of his iconic life. (Photo courtesy of Greglon Lee)

Was Bruce Lee of English Descent?

The Forgotten (Female) Pioneers of Tai Chi in the West