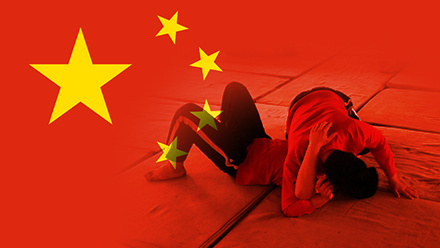 Deep inside the Shaolin Tagou Wushu Academy’s old campus, in a drafty old gym of bricks and raw wood, a group of teenage martial artists are receiving a lesson in Brazilian jiu-jitsu. The kids, aged 15-24, normally train Sanda, a combat sport derived from traditional Chinese kungfu that specializes in quick hard kicks and standing takedowns. But today they have a special guest coach, Vaughn Anderson, a BJJ brown belt and mixed martial artist fighting for Bellator who has spent his entire career training in Asia. Vaughn thought the famous Wushu academy would be a perfect getaway to cut weight and detox before his upcoming fight.

As Vaughn rolls with the traditional gym’s biggest kid over and over, demonstrating basic grappling control and submission holds, one of the gym’s younger students follows Vaughn around taking down the Chinese name for each submission. Vaughn, who speaks Mandarin, helped come up with the translations for the MMA students he regularly teaches at the Xi’an Sports University, one of the premier MMA camps in the country.

As I watch the students clumsily, but rather quickly, attempt to gain side control, or recklessly submit each other with a barely learned armbar, I am struck by the seemingly endless potential locked up in the young Chinese students. I’m not the only one. The gym’s normal coach, Li Lan Jie, is also watching intently.

“Coach An is doing us a great service here,” Coach Li says, referring to Vaughn. “When I think about mixing Sanda with Brazilian jiu jitsu ...” Coach Li can’t finish his sentence. He just mashes his hands together and looks at me with charged eyes and a wicked smile, then turns to bark at the kid with the clipboard. “Make sure you get the names for all those locks! You! Go wrestle Coach An!”

The rolling continues. Vaughn takes on three or four kids for an hour, until he is sweating and red. After taking them all on, one after the other, they sit and talk -- thirty-odd provincial Chinese teenagers taking notes in a semi-circle around him. What started as professional courtesy has now turned into a more regular clinic -- an “East devours West” moment in which an older, more experienced Westerner has his knowledge consumed by a group of voracious young Chinese not used to the one on one training. 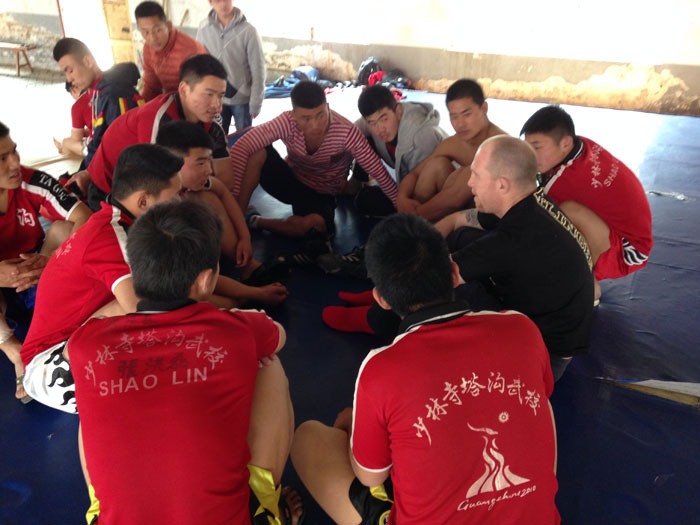 It wasn’t always such a pleasant situation. When Vaughn first arrived at the prestigious Tagou Academy (whose students perform at gala events for top-level Chinese politicians and VIPs), located within the grounds of the world-famous Shaolin Temple, he was asked to stay at the old campus, a 1980s era warren of makeshift structures that more closely resembles a Chinese prison than the grounds of the largest wushu academy in the world. Vaughn described the gym they were training in as the “tree fort of gyms,” with rock hard padding on the floor covered in dust and peppered with cigarette butts.

It got worse. The old campus’ public bathroom is a concrete outhouse with buckets of piss overflowing into silted, choking gutters. When Vaughn and his team leave the gym for lunch, they have to weave through clumps of bald headed students squatting by gutters shoveling gruel in their faces and staring. Catcalls follow Vaughn wherever he goes. Sometimes it’s just a crowing “hello,” ubiquitous in the backwoods of China. Sometimes it’s a “fuck you” hurled by a kid who scampers off, melting into a sea of grinning faces. The kids aren’t exactly hostile, they’re just punks crossing the line and hopping back to get laughs from their friends. But it sucks, and for the first couple of weeks, the whole team was listless and dispirited. 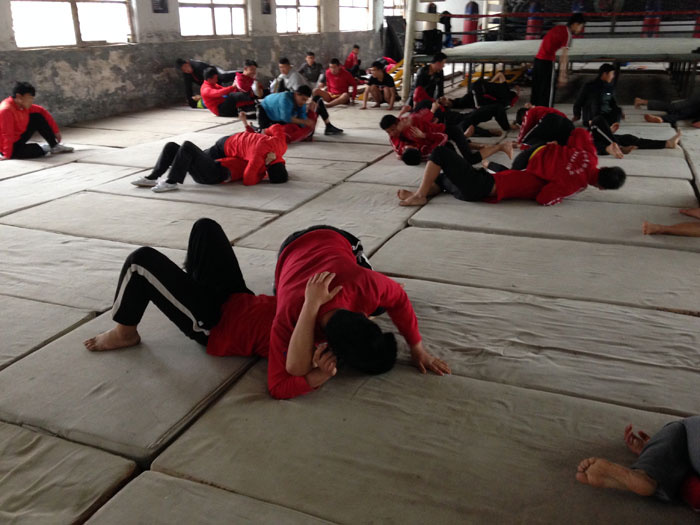 It wasn’t just the conditions. Large public sports institutions like the Tagou Academy do things the Chinese Communist way: mass training sessions including “call and response” between a coach and anywhere from 20 to 50 to hundreds of students. Tagou has 35,000 students, some of whom will become professional wushu performers and Sanda fighters for China’s gala events and small-time fight circuits. But, most of the kids will end up as small time security guards, cops, or petty thugs after they graduate.

Such a system breeds a particular type of coach. Coach Li often wanders around the gym with a lit cigarette dangling from his lips, barking out advice and every now and then striking a pose. His fat buddies show up in street clothes to hand him cartons of the region’s finest cigarettes and a bottle of moonshine. Older coaches often gather a group of 20-something coaches-in-training around them, passing out smokes and playing with their cell phones. They succumb to a combination of stereotypical Communist-driven laziness and the traditional Chinese idea of a “kungfu guy,” a guy who can smoke and drink all day and still kick your ass.

They also do shit like call in a Henan TV camera team to shoot for a day, and then broadcast a “special” on how the Tagou Academy is modernizing, having hired a famous foreign coach who commands $300,000 USD in show money.

“I told them to put us up in a proper hotel, and try and set up some proper training, or we’re getting the fuck out of here,” Vaughn told me. He snorts in disgust and spits. “There is a lot of bullshit in places like this, but if I can keep to my regime, cut weight and get my diet straight, then I’ll be fine,” he says. “You just gotta make do.” 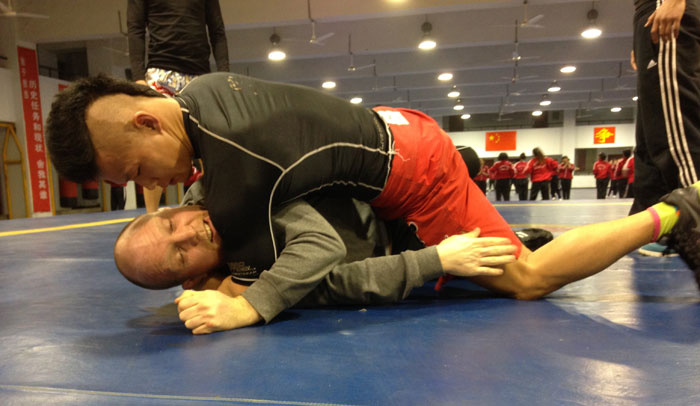 Now, after moving from the Tagou Academy’s decrepit old campus dorms to the new campus hotel, a lot changed for Vaughn and his crew of young MMA fighters. A couple weeks of cranking necks and torqueing arms had earned Vaughn some respect, outside of the backhanded deference always given to foreigners in China, and being able to eat and sleep in some comfort helped boost morale a bit.

I showed up with a secret shipment of Chinese medicine that Vaughn asked me to mule for him, and I was followed by a team of Scottish videographers documenting MMA in China, with a focus on Vaughn and his team. The catcalling subsided, and was checked hard at the door of the gym. After every lesson Vaughn taught, the Sanda students would clap, and get right to training. The coaches stopped lounging about and smirking at the MMA guys, and out came the clipboards and questions concerning this or that submission.

Mutual respect developed into mutual benefit. The kids gave Vaughn a workout, helping him to get in shape and cut weight, and Vaughn provided them with a completely new perspective on martial arts and the fight game. 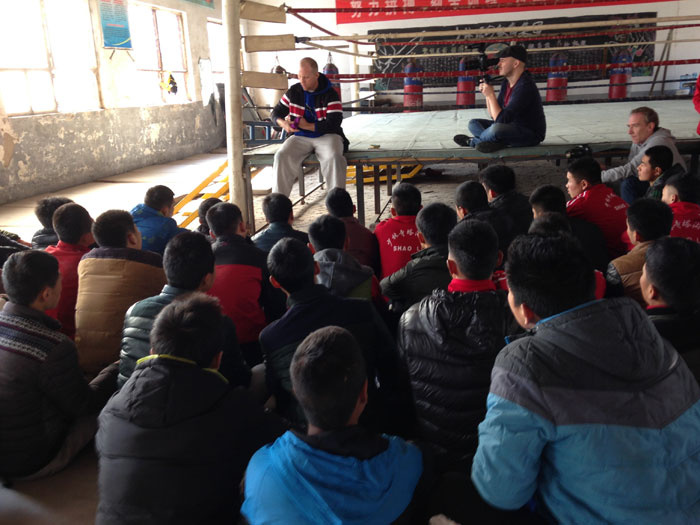 It crystallized for me the day Vaughn taught the Sanda kids how to wrap their hands. None of them had ever wrapped their hands properly before, and several of them had chronically sore fists and weak wrists. About 30 kids sat around Vaughn and wrapped their hands in silence for almost an hour. When he left they stood and clapped. A kid grabbed his bags and carried them out to the bus back to the hotel.

That night he and his MMA team, including up and coming RUFF talent Zhao Yafei, rolled for two hours on the sixth floor open gym of one of the student dorms. A couple dozen boys watched and took photos with old Samsung phones, while a large group of teenage girls went through their wushu forms. Some snot-faced five-year-old Chinese kids watched Vaughn submit Yafei a couple times, and then began rolling themselves.

Vaughn may have just planted a seed here, I thought to myself as I walked back to the hotel that night, an MMA seed right inside the sleepy, once-mighty Shaolin Temple.