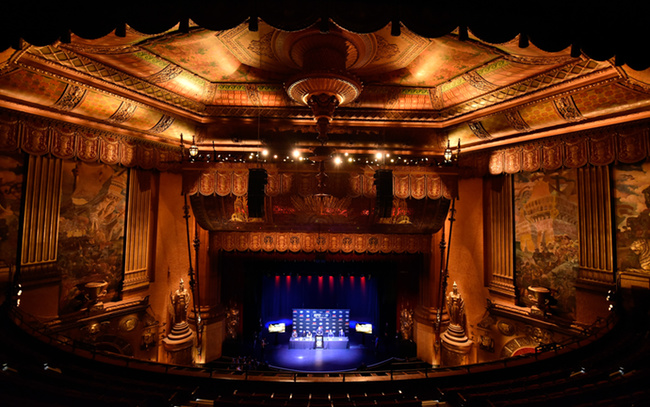 Inside the Beacon Theatre during the UFC 189 press conference in New York City. (Photo by Jeff Bottari/Zuffa LLC)

Was it the height of delusion and naiveté to think when Sheldon Silver resigned as speaker of the New York State Assembly in early February that a bill legalizing professional MMA in New York would simply sail through the State Legislature in Albany and the UFC would be putting on shows at Madison Square Garden by the end of the year? It didn’t seem so when Silver, the all-powerful, adamantly anti-MMA Assembly leader, was arrested on federal corruption charges on January 22. And it definitely didn’t seem so when Carl Heastie, a Democrat from the Bronx who had co-sponsored pro-MMA legislation in the past, took over for Silver as Speaker on February 3. And it absolutely didn’t seem so when House Majority Leader Joseph Morelle, a former Silver lieutenant, reintroduced his pro-MMA-legalization bill, A.2604, just two weeks later. More than 15 years after New York banned MMA, and five years after pro-MMA legislation starting appearing on the State government docket only to be bottled up and tossed away time and again by Silver, 2015 felt like the year the MMA faithful in New York could finally start celebrating. Surely the days of waiting and hoping were over. Right?

Well, if governance were simply the art of counting votes, yes. But in the convoluted maze that is American democracy, math may actually be the least of a politician’s concerns.

Take Morelle’s MMA bill. On paper it has all the votes it needs to sail through the 150-member State Assembly and over to the Republican-controlled Senate, a body that has passed a pro-MMA bill the last four legislative sessions running.  To get the majority needed in the Assembly, a bill needs 76 yea votes. Currently A.2604 has 73 named sponsors, including more than 50 members of the 104-member Democratic conference. From all indications there are far more than two votes available in the rest of the Assembly to push the bill through, and Republicans are just waiting to stamp their approval, kick it over to their party colleagues in the Senate, and move this whole MMA show along. Sounds simple. A fait accompli. A done deal.

In other words, there are currently, as we speak, enough votes to legalize professional MMA in New York and open the door to fights at Madison Square Garden or Yankee Stadium or the Coney Island boardwalk, but as a result of obscure shady backroom political wheeling and dealing (and I say that as a lifelong, dyed-in-the-wool Democrat) the bill still may be no closer to making it to the floor of the Assembly than when Sheldon Silver was Speaker.

According to a source in Albany familiar with the matter, there are currently about 70 Democrats in favor of A.2604, so party leaders are searching high and low for six more to get the job done. To do this requires more deal-making and horse-trading, including adding amendments to the bill that would require all promoters to carry injury insurance, thus freeing up the chair of the Committee on Insurance and other ranking members of the conference to soothe their consciences and their constituencies and vote in favor.

“We’re as frustrated by these traditions as anybody,” our source in Albany says, “but we can’t buck protocol. This is the way things are done.”

Legalize It: Jimmy Fallon Calls for MMA in NYC