Power of the Wooden Dummy: Totem of Traditional Kung Fu 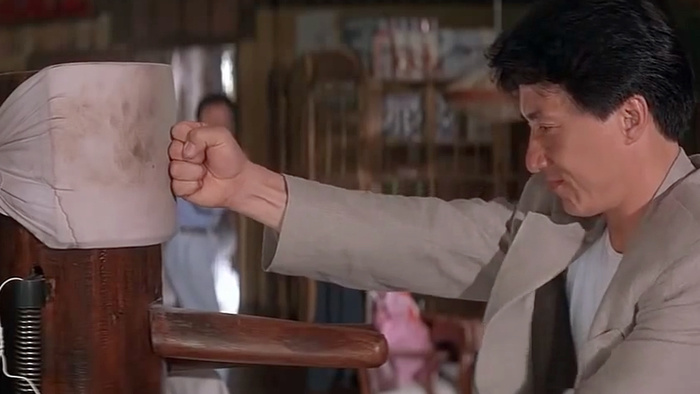 Type “wooden dummy” into the oracle and you’ll be greeted with pages and pages of wooden training partners for sale: traditional Wing Chun stacked dummies, PVC dummies, free-standing dummies, dummies for Mantis style, for Jeet Kun Do and Hung Gar, more dummies for Choy Lay Fut. Innovative metal dummies and solutions for people who want one in their cramped apartment, or who want a traditional dummy shoved into a hole in the ground, except without the hole in the ground.

There will be confessions of a poor carpenter, and his attempts to make a muk yan jong with links to the best plans for your own wooden dummy. Click over to the videos tab and you have a full afternoon’s worth of people hitting the dummy: Older Cantonese men, like Ip Man’s son Ip Ching, older Caucasians stuck in the 80s, clips from Jackie Chan and Donnie Yen, dozens of training videos featuring every Southern Chinese kung fu style known to man. For extra credit, go ahead and scroll down to the Youtube comments for a glimpse into the vicious style-wars that wrack the traditional Chinese martial arts world.

There’s a vast, varied, flourishing world of traditional martial arts out there with at least one thing in common: reverence for the wooden opponent and its role in the kung fu practitioner’s training regimen.

Ip Man is credited by martial arts scholars with inventing the first Wing Chun dummy, the one dummy that binds all others together. Ip Man was a rolling stone. He rarely stayed in one place for too long so he needed a portable, compact dummy to train on and keep in whichever gym he happened to be in at the time. The traditional wooden pole stuck in the ground—the one you can find in kung fu schools all over China—wasn’t suitable for a master on the move in Hong Kong’s concrete forest. So he and a friend, carpenter Fung Shek, developed the dummy on slats that Wing Chun practitioners still use today.

When Ip Man’s student Bruce Lee exploded all over the world, he brought Wing Chun kung fu, Hong Kong cinema, and the wooden dummy with him. Selling wooden dummies became a big business, not just in Hong Kong with the growing WIng Chun community, but now also in the U.S. where Wing Chun, Jeet Kun Do and Hung Gar were spreading across the land, establishing dojos in their wake. Just like with Karate and the Bubishi, a single transmission point from Southern China to the West created a wave of kung fu schools teaching the southern Chinese styles, with the wooden dummy at the center.

Training on the wooden dummy became a rite of passage for kung fu students. Being able to move quickly and fluidly through the motions while hitting something as ungiving as wood separates the beginner from the seasoned student. Depending on how you train with the dummy, being able to withstand the pain of “body hardening” was a further step up from just being able to maneuver around the dummy. Once a student gains proficiency with the basic movements—blocks and grabs—then it’s on to innovation and improvisation. When stars like Jackie Chan and Donnie Yen performed their routines on the wooden dummy for the silver screen, generations of Western kung fu practitioners had a level of skill to aspire to. Business boomed for dummy builders.

The wooden dummy is not only a core training tool for those learning the movements of a style, or for those looking to harden their bodies. The dummy is also a powerful totem associated with the original modern-day masters of the most popular kung fu styles in the world. It’s almost a requirement for traditional kung fu dojos to have a dummy in the room. The symbolic power of a man facing the dummy has seeped into mainstream culture such that any depiction of kung fu must have the dummy in there somewhere, to let us know that this martial art is an older, traditional one. There is a legacy behind it. It requires sacrifice of body and time. It will definitely hurt you.

Even just the sound of a proficient martial artist hitting the wooden dummy is powerful, like the difference between the crack of a home run in the pros and the dinky ping of a minor league aluminum bat.

People have been lamenting the death of real kung fu for centuries. This epoch is no different; not even the arguments are any different than the ones put forth in the past: kung fu has grown soft, it’s not useful, there are no real masters anymore.

It has never been a question of true demise, but more of what carries on into the future. That’s why Ip Man’s wooden dummy might be his greatest contribution to martial arts. The wooden totem has a strong symbolic value that allows modern day martial artists to hark back to the masters who came before them, and not just to their methods, but also to their ethics and philosophies. It provides an unbroken connection in a time when those types of relationships are rare and precious.

It’s also helpful that a wooden post with three protruding branches can also be used in an infinite number of ways, dependent solely on the creativity of the student. Each kung fu style has a different set of forms that translate well onto the dummy. Mixing those together into different combinations executed with speed and power is a pursuit that can last a lifetime.

What Jackie Chan's Drunken Master Can Teach You About Fighting