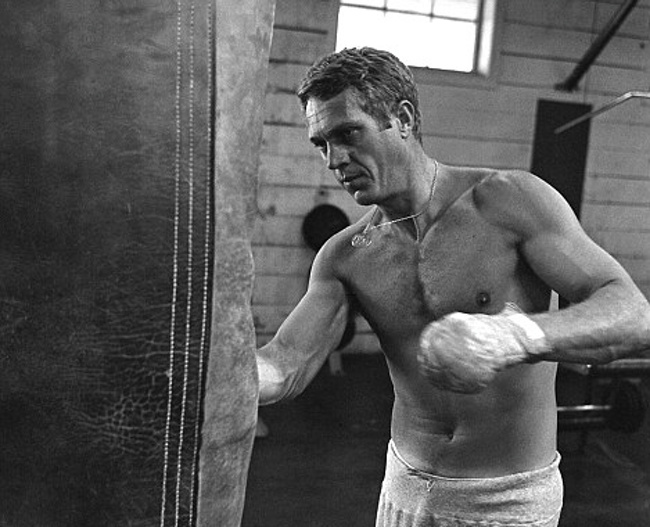 “McQueen is perhaps the most multi-faceted and complex person I’ve ever researched,” biographer Marshall Terrill, author of Steve McQueen: Portrait of an American Rebel and Steve McQueen: The Life and Legend of a Hollywood Icon told Pop Culture Classics in 2010. “He was the epitome of yin and yang—sweet and scary; caring and selfish; cocky and insecure; funny and humorless; generous and thrifty. He was every emotion you could think of.”

Among McQueen’s more perplexing contrasts was the way that the star of classic films like The Great Escape, Papillon and Bullitt treated his body, abusing it and looking after it with almost equal vigor. The actor was notorious for his hard-living ways, with a particularly fondness for fast cars and beer, but he was also a devoted fitness buff in his spare time, working out with a personal trainer, boxing, and taking martial arts lessons in his well-appointed home gym. One of the most iconic and enduring photos of the actor, in which he works a heavy-bag wearing nothing but a loose pair of sweatpants, ratty handwraps, and a stony expression, was taken in that very gym by a photographer for Life magazine in 1963.

McQueen’s primary motivation for such a dedicated physical regimen was that he wanted to be in the best possible shape for his race car driving hobby and his fairly extensive stunt work on his own films, but his friend and Jeet Kune Do instructor, some guy named Bruce Lee, believed there was more to it.

When a television interviewer asked the martial arts legend why so many famous people wanted to train with him in the 1960s (McQueen, James Coburn and Kareem Abdul-Jabbar were all devoted students), Lee said, “Most of them, they are coming in to ask me not to so much how to defend themselves, they want to learn to express themselves through movement, be it anger, be it determination, or whatsoever. He is paying me to show him in combative form, the art of expressing the human body.”

McQueen’s physical expressions were a bit on the extreme side sometimes. When the same interviewer asked Lee who among his famous students was the best fighter, the master praised his friend’s toughness, but found Coburn a more philosophical and technical student.

But Lee also admired McQueen’s work ethic, which was about as extreme as everything else about the man.

“As a student, Steve can be good,” Lee once told M. Uyehara, author of Bruce Lee: The Incomparable Fighter (a version of the book’s chapter on McQueen was also published in the April 1979 issue of Fighting Stars magazine). “Because he’s a hard worker. One day I went to his place to work out and that guy doesn’t know the meaning of quitting. He just kept pushing himself for hours—punching and kicking without a break—until he was completely exhausted. His gym clothes were completely soaked by the time we gave up.”

The actor then dragged Lee to his office while they were still in their sweaty workout gear.

“It was kind of funny, Steve looked like a bum off the street and everyone was looking up at him and kept calling him ‘Mr. McQueen,’” Lee recalled.

McQueen could train hard, but he has issues with consistency. Between his work as an actor, his business ventures and his all-consuming love of car and bike racing, he didn’t always have much time for martial arts.

“Steve would be damned good if he could work out more, but the sonovagun never stays home,” Lee told M. Uyehara. “If he’s shooting, he’ll be stuck at a location as long as five months, returning home for a couple of days in between. If he’s not working, he’ll be somewhere in the desert, driving his dune buggy or motorcycle.”

When the actor had spare time while filming a new picture, he’d sometimes pay for Lee to join him on set.

“Steve flies me in because he wants to talk to somebody else besides the same guys he works with all day. I guess he gets sick of seeing them day and night. We usually talk about life or philosophy and work out a little. It gives Steve a break from what he’s going through. No, I don’t stay long, just a couple of days,” Lee said. 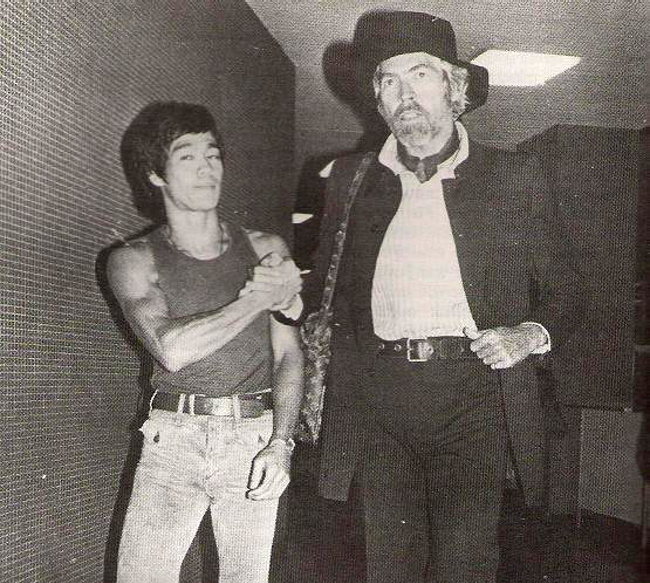 Writer M. Uyehara doesn’t believe that the martial artist charged McQueen anything for their lessons together, although he was making over $100 an hour with many of his other famous clients. As Lee explained the relationship to him: “I teach Steve jeet kune do and he gives me advice on acting. He doesn’t try to convert me to his [acting] style. He believes that each actor must create his own style. You can’t learn that from anyone.”

The actor clearly didn’t think that was a fair enough exchange, though. As a result, Lee often found himself on the receiving end of McQueen’s famed generosity. The star tried his best to treat his pal to a number of extravagant gifts, including a Porsche and a downpayment on a house.

“I couldn’t accept,” Lee admitted. “Boy that’s a lot of money and he was just going to give it to me with no strings attached. I had to turn him down because I’d feel obligated. But it was nice of him, and I sure appreciated it.”

Lee was also treated to McQueen’s mischievous side on occasion. The latter once sent the former an autographed 8x10 of himself, which read, “To Bruce Lee, one of my favorite fans.” This was at the height of both their friendship and Lee’s fame. And when McQueen found out that Lee was interested in getting a Porsche, he decided to take him for a terrifying joy ride down Mulholland Drive in L.A. The legendary martial arts hero ended up cowering on the floor of the car and threatening to kill McQueen.

Although their training tapered off toward the end of Lee’s life, their friendship only became stronger. Lee’s death in 1973 was a painful blow.

“I care about Bruce and I think it’s going to be a great loss,” the star told M. Uyehara. “I feel very bad about it. He was a wonderful guy.”

Despite his notorious distaste for funerals, McQueen traveled to Seattle to be one of Lee’s pallbearers.

“I felt like saying goodbye to a friend,” he told M. Uyehara. “That’s why I went up there—to pay my respects and to try to make it easier on the people around him.”

Check out these stories: