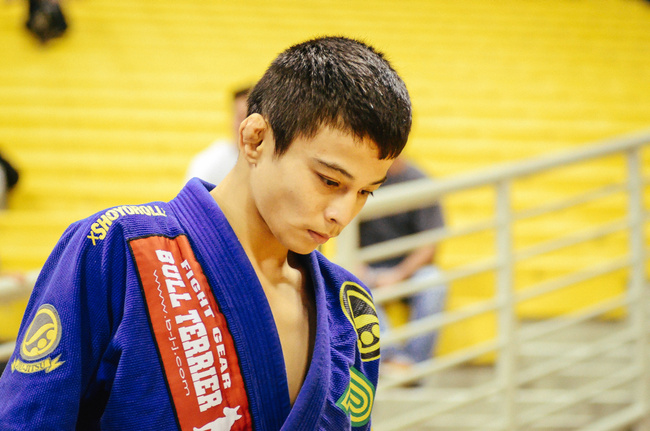 The European Jiu Jitsu Championships is regarded as one of the four grand slam championships in sport Brazilian jiu jitsu. As the start of the competition season, the Europeans often times acts as a proving ground for new belts hitting their brackets for the first couple of times.

Thousands have descended upon Lisbon, Portugal, and this year’s Euros has just been announced as the largest tournament within the IBJJF circuit, beating out the historic Mundials and Pan Ams.

For all of you on the road to Lisbon, and for the rest keeping the fires lit on the mats around the world, pay attention. It’s nearly a week long blowout of some of the best up-and-coming talent on the planet and you can learn so much on and off the mat.

The established legends of the sport, such as Andre Galvão and Gabi Garcia, are set to compete and whilst they deserve your attention, for your own development, focus in on the new kids coming through.

Jiu jitsu is a constant stream of dynamic counters and philosophies, ever flowing and evolving. The best way to better yourself is to be influenced by those ahead of you.

By creating a family tree, if you will, of styles, positions and techniques that are world-class, you in turn can form and mold to create something tangible, something that’s yours.

All of this starts by observing. Keenan Cornelius unveiled his worm guard and lapel guard during last year’s circuit. Now, every purple belt worth their salt knows counters and sweeps to the worm.

To always evolve, you need to be able to play on what’s come before you and start to riff on the mats to continue adding to the tapestry.

As Francis Ford Coppola once related to young directors: “We want you to take from us. You will take what we give you and you will put it in your own voice. That’s how you make your voice. And that’s how you begin.”

The following names are simply a start, not a means to an end. They all showcase the mental requirements to be successful out on the mats. By looking at what they do, you’ll see what can be achieved in a creative space, which you can then work to reverberate through the grappling community.

Edwin Najmi has a resume and highlight reel to match the best in the sport. Always hunting for the submission, the lightweight is renowned for his triangle choke, oft times landing high-flying moves that transition or achieve the blood choke.

Having won purple belt weight and absolute at the worlds, Najmi will be looking to start as he means to go on in his final stretch towards the black belt: creatively executing new and boundary-pushing ways to execute a move that’s become his signature.

Look for a podium finish for the Romulo Barrel protégé, but more than that, look out for an athlete who understands that within a sea of competitors, you need to know how to do your own thing, and do it better than anybody.

A former purple belt weight and absolute champion, Sebastian Brosche’s concepts of combining an explosive style deeply rooted in dynamic movements has made him a force at the lower belts.

A renowned guard passer, Brosche became renowned at the 2013 worlds for being one of the few to unlock the perceived unpassable guard of João Miyao.

Known for breaking down his opponents guard to manipulate what and where he wants his opponent to be, Brosche’s concepts can be key for guard passing development, particularly his figure four set-ups and entries to step on the knee or thigh.

The Swede is also a well-versed judoka, having competed for the Swedish national team. Combining this with his understanding of yoga, Brosche is a throwback to the Rickson Gracie style, owing full kinesthetic intelligence to his progression.

In a controversial turn of events, Gianni Grippo left Renzo Gracie’s in New York City to train at local rival’s Marcelo Garcia’s. Having trained under Gracie since childhood, Grippo stated his intention on wanting a team focused purely on sport jiu jitsu.

The move, whilst decreeing muted hatred from those who still use the word creonte, has paid off. Earning his black belt, becoming a leader for Marcelo’s  brown belt dream team, closing out Pan Ams and competing at the renowned Copa Pódio have all been achieved under a short time window, all while wearing an Alliance patch.

The New York based athlete is well-versed as a guard player and is renowned for his De La Riva and reverse De La Riva set-ups. Having had a year to jam with Garcia, Grippo has begun to put the pieces together on combining his own game with the X Guard, arm drags and top game that Marcelo built his dynasty upon.

The featherweight bracket has for years been the staging grounds for one of the great rivalries of our generation: that of Cobrinha and Rafa Mendes. With neither man set to compete in Lisbon, this could be Grippo’s chance to earn his second major as a black belt.

Possibly Ireland’s most accomplished grappler, Darragh O’ Conaill has entered a new level since earning his black belt from Saulo Ribeiro. Starting his black belt campaign by winning the London Open Gi and No Gi along with a variety of top flight super-fights, O’Conaill certainly doesn’t want Conor McGregor (a training partner) stealing the Irish spotlight in the martial arts community.

A multi time No-Gi Europeans champion, O’Conaill is in a heated middleweight bracket. How a brown belt becomes a black belt is fascinating—some falter and some experience a wash of relief, creatively and confidently opening up. From what we’ve seen of the Ribeiro representative, he’s certainly in the latter group.

The Dubliner’s mental game is a huge indicator of his success, and appears to be heading in to a major as confident as he ever has been. Combined with a grinding top game, an understanding of patience and waiting for mistakes, and effective chokes from the top (look out for his Marcelo inspired guillotine), expect the Lovato protégé to flourish in his first major black belt open.

Watch for: Passing, chokes from the top

The Cicero Costa standout has in the last two Worlds created some of the most emotional displays seen from a fresh faced black belt. In 2013, he defeated the much heavier Keenan Cornelius to capture the brown belt open class.

In his first black belt worlds he lost a razor thin and controversial final to future hall of famer Gui Mendes. The Miyao’s based their style off of the Mendes brothers, remixing it to make their own distinct voice on the mats, something that has clearly paid off.

In each matchup, Miyao displayed his contorting rabbit hole of guards, from 50/50 to spider. His style has contrasted the community, and until heel hooks become legal, it’s a style that pays off in points matches.

Games such as Miyao’s require that something extra, to dedicate a life on the mat to either pull off a sweep or pass. Athletes such as Paulo and João, who sleep on the mats of their academy, show at every tournament the power of dedication mixed with a mind ready to do what it takes to win.

The daughter of jiu jitsu legend Megaton Dias, Dern has proudly flown the flag for her Royler Gracie lineage, cementing her status as a force to be reckoned with taking her weight and second in the absolute at this year’s No-Gi worlds.

Known for her guard work, particularly in setting up submissions from the bottom, in the absolute finals Dern slapped a triangle on Gabi Garcia and had the multi time ADCC champion in some trouble.

Actions speak louder than words, and the motivation to hunt and defeat a world champion who outweighed her by nearly 100 pounds says it all about Dern’s competitive fire. Look out for Dern and current ADCC champ Michelle Nicolini to battle it out in the featherweight final.

In the shadow of Kumite co-star Keenan Cornelius, AJ Agazarm has been hell-bent on seeking revenge on the Atos product since each man received their black belts.

Having won his weight and absolute at No-Gi Europeans this year, he is ranked as the number one no gi lightweight on the planet, hoping to continue to make waves in the gi at this year’s Europeans.

A former Ohio built collegiate wrestler, Agazarm is well known for his explosive and to-the-death style of point’s competition. Mentally, he’s well-known for attempting over and over again to wean down his opponents to get them to the mat his way.

The Gracie Barra rep is well-versed in maintaining constant pressure due to his cardio. This allows him to bombard his opponents with single and double leg variations, ensuring top position.

One for the big guys. Erberth Santos has, in only a few short years, been hailed as a potential challenger to the heavyweight crown. He is well-remembered for his dominant displays in last year’s brown belt absolutes, winning the Mundials, Pans and the Brasileiro.

At only twenty years old, ‘Dino’ has cut down from super heavy to heavy for the Europeans. Mix this with youth and a natural sense of the frenetic that allows him to close distance on the feet like a man much smaller.

His loose and reactive scrambles often lead to him being up in top position. Speed is a killer, particularly in heavier divisions. Marcus Almeida became a phenom in jiu jitsu because of his fast pace and, with Santos on the rise, look for a new kid on the absolute block.