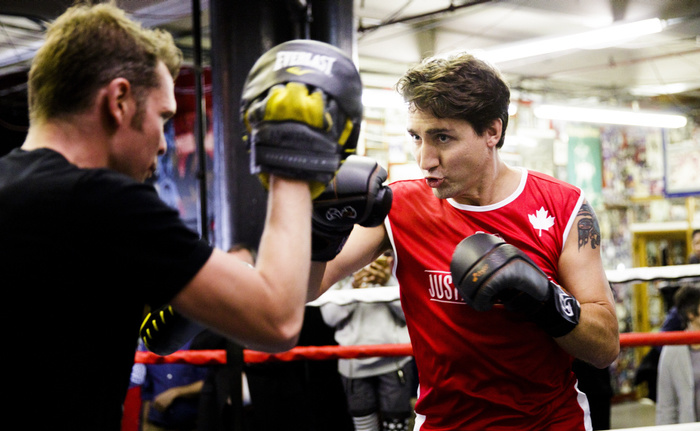 Boxing may have helped Justin Trudeau to establish his reputation—and continue to grow his public image internationally—but an errant elbow and a hot head not exactly befitting a combat sports disciple recently threatened to do permanent damage to both.

The Canadian Prime Minister, who has often been compared to a Disney prince, went full Gaston during a debate in the House of Commons yesterday. Frustrated over tensions surrounding a vote on physician-assisted dying legislation, and feeling that opposition whip Gord Brown was taking too long to get to his seat, Trudeau stormed across the floor to confront members of the opposition. He continued the grand Trudeau family tradition of swearing in the House—one started by his father, former Prime Minister Pierre, in 1971 and proudly revisited by Justin himself in 2011—by dropping a fuddle duddle bomb. He then attempted to physically assist Brown back to his seat, and elbowed a Member of Parliament from another party, Ruth Ellen Brosseau, in the process. While unintentional, the elbow, which hit Brosseau in the chest, was hard enough to both hurt and upset her. She subsequently missed the vote because of the incident.

Trudeau returned to his seat after “manhandling” brown, as NDP House leader Peter Julian put it, but soon crossed the floor again. Elizabeth May, leader of the Green party, later claimed that he was trying to apologize to Brosseau personally with this move, but it just ended in another shouting match, this time with NDP leader Thomas Mulcair.

Mulciar repeatedly called Trudeau “pathetic” while Canada’s last Prime Minister, Stephen Harper, smirked over the proceedings from the sidelines like a mix of Alfred E. Neuman and Emperor Palpatine.

And yes, all of this went down over a bill concerning dignity. (For a more thorough explanation of the proceedings and the bill, CBC and Buzzfeed Canada both have more proper reports.)

Classic Canadian author Hugh MacLennan once posited that Canada would some day act as a bridge between the new and old world, the perfect middle ground between Europe and the United States of America. And we finally got to realize his dream yesterday as Canadian politics transformed itself into the perfect middle ground between the petty Machiavellian genius of Armando Iannucci’s English political satire, The Thick of It, and his more broad and on-the-nose American political satire, Veep.

Anyway, this incident quickly got its own -gate suffix, and Elbow Gate quickly gained both national and international attention, becoming the most infamous scandal involving a Canadian politician accidentally elbowing a woman since Ted Cruz unintentionally caught his wife in the face earlier this month.

The elbow has shifted the tone of the coverage surrounding Trudeau, at least temporarily, as well. The Prime Minister, usually referred to in much loftier terms in the news, is described as “a boxer and former bar bouncer” in the Associated Press’s story on the matter.