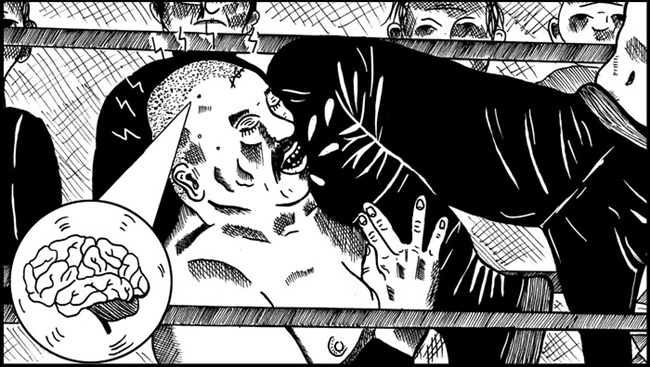 World Wrestling Entertainment (WWE) recently acquired four talents from New Japan Pro Wrestling which have set the Internet wrestling community aflame: Doc Gallows, Karl Anderson, Shinsuke Nakamura and A.J. Stlyes. Styles made his first WWE appearance at the Royal Rumble to a rapturous response from fans but the others have not yet appeared for the promotion at the time of writing. I am not an avid follower of professional wrestling by any means, but the news caught my attention and I was particularly excited by the prospect of Shinsuke Nakamura on Western television. Nakamura is known as the king of 'strong style' wrestling for the simple reason that when he throws a fake strike in a fictional fight, it still looks enough like it hurts for you to suspend your disbelief.

It is interesting to remember that professional wrestling in its current state began when actual catch wrestlers realized that going from town to town and wrestling legitimate matches was exhausting. It was far easier to fake it and as there was no television in the early days of professional wrestling, the wrestlers could travel with almost the exact same well rehearsed match. The success of television saw a need for variety and new matches, new moves, new gimmicks, and fresher stories. That's how professional wrestling became what we know today. The re-branding of wrestling as 'sports entertainment' allowed the major companies to really get outlandish in their storylines and matches, and cemented the move away from actual competition. Weirdly enough, the many slams, bombs and suplexes, the use of tables, ladders and chairs, and the high flying spots in continuing efforts to push the envelope are the antithesis of what the first wave of professional workers had in mind when they began working their matches. Far from being an easy night's work, professional wrestling is one of the more grueling professions imaginable. Jim Cornette articulated the worst case scenario for a pro wrestler when despairing over the Brawl for All and the heyday of ECW—you've told the crowd it's not real, they know it's not real, and you're still actually hurting yourself.

Well, maybe it's still real to some.

Typically, the more striking there is in a professional wrestling match, the worse it looks. It also seems to be that the older and more beat up a wrestler gets, the more he falls back on strikes than on chain wrestling, pick ups and so on. Once you have seen a man hit legitimately a few times in your life it sticks with you. You have an understanding of how an object in motion impacting a man's face or body looks. Hell, half of the fun of watching old Scott and Rick Steiner matches is in spotting the really stiff clotheslines they dished out to young wrestlers who they knew wouldn't do anything but take it. The real connections—deliberate or accidental—aren't hard to spot. Here's Kevin Owens, formerly Kevin Steen, getting his nose spread all across his face by a miscommunicated palm strike.

So when you see a punch match, even by the best in the business, it has a tendency to break that suspension of disbelief. And if you see a bad punch match... woe betide you.

Almost every strike you see in the wrestling ring is accompanied by a slap on the thigh (for that head kick noise) or a stamp on the mat to produce some sound. This means that the punching form looks absolutely bizarre and once you notice your man jumping on one leg while he's stomping mudholes in the corner, the magic is completely gone.

Or when you catch a wrestler imitating boxing form, except to pick up his back foot and stamp it down every time his right hand lands, you can't unsee it.

But I'm beginning to sound like one of those people who gets mad about the Hogan leg drop or The Worm for being unrealistically damaging... in a professional wrestling match. The truth is that if you have any experience hitting anything, learning to pick up and stomp your driving foot as you perform a strike is actually a pretty difficult thing to do. I'm a mark for technique regardless of whether it is real or not. The classic kung fu street magic used to deceive tourists is just as fascinating as a high level boxing match if it's doing its job convincingly. And a truly convincing fake strike is every bit as interesting in its subtleties as a legitimate one.

Generally, the striking techniques of professional wrestling use at least one of the following methods, plenty use a combination:

⁃An actual ballistic movement into a reasonably resistant target. This includes chops to the chest, the low kicks so common in Japanese promotions and also strikes which are sold to one part of the body but actually land on another, e.g. the popular forearm strike to the head which actually lands on the top of the chest.

⁃A pulled strike combined with that stomp or thigh slap to distract with noise as the receiving wrestler sells the strike e.g. Shawn Michael's slapping his kicking thigh in the legendary Sweet Chin Music.

⁃ Or an actual strike with a softer connecting surface. Which brings us on to the knee strikes we're going to talk about today.

To illustrate two methods of selling a knee strike, I'll use The Great Muta's Shining Wizard as an example. Muta's opponent gets up to a knee, Muta runs in and steps on the knee before throwing his own knee to the head. Muta can use the actual point of the knee, pulling the strike and delivering a small bump into the top of the chest:

Notice the perfect breakfall before selling.

But the vast, vast majority of the time Muta will swing the inside of his thigh into the opponent's head. It changes from time to time, if he feels like he's botching it he'll swing his shin clean over their head, but you can observe the same thing happening over and over again.

And here's a couple in the corner:

Here's the really interesting thing about delivering real knees in real fights—it can be pretty difficult. The disparity of density between the thigh and the knee cap is tremendous. You can slam your thigh straight into someone's face and fail to do any meaningful damage, you can graze someone with your knee when rolling around and cut their brow right open. The same is true of the elbow—and this is why all downward elbows in professional wrestling are connected with the triceps.

The top of a sprawl and the front headlock should be the most dangerous positions in the world for knees to the head in MMA, though the banning of knees to the head of a grounded opponent has eliminated that possibility. However even in organizations in which they are legal, or in the UFC when they head locked fighter is on his feet and knees to the head are A-Okay, the vast majority of fighters really struggle to put good knees in, instead forcefully bumping their thigh against the opponent's head. This is due to a focus on power over accuracy. One of the few fighters who is actually effective from this position is the goddess of knee strikes, Cat Zingano. The secret to Zingano's success is that she is often willing to sacrifice thrusting her hip in with maximum force just to make sure that the right part of her body connects flush.

A gorgeous knee straight into the jaw sees Miesha Tate quickly drop to her elbows again.

Notice that sometimes she gets a hip thrust in, other times she's just picking the knee up, but every time she connects perfectly with the point of the knee.

Thailand's Nak Muay are known for eschewing shin guards when sparring and relying on their control over their kicks rather than protection. When sparring in the clinch they will also disarm their own knees by throwing slapping strikes with the inside or top of the thigh. Come fight time these can readily be substituted with the true knees they have been working against the bag non-stop, the clinch sparring has served its purpose as an exercise in spotting openings and finding control. Here is Saenchai, probably the greatest Nak Muay in the world, being bullied by one of his coaches in the run up to a fight. Notice that the coach, Pot, is connecting repeatedly with his thighs, meanwhile the occasional straight knee thrown by both men is pulled and controlled.

So this brings us back to the King of Strong Style, Shinsuke Nakamura. Here is his legendary Bomaye knee. Named for Antonio Inoki (who in turn took 'Bomaye' from Muhammad Ali) and with Bomaye meaning 'kill him', it seems pretty accurate:

Nakamura seems to have turned his knee strike into the most convincing strike in pro wrestling. His revelation appears to have been that convincing strikes have a weight in their impact. Here he is in a professional wrestling match against mixed martial arts legend, Kazushi Sakuraba. What is impressive is that I have seen Sakuraba legitimately knocked out in the ring far more times than I am comfortable with, and Nakamura's knees are almost more convincing than some of the blows Sakuraba has actually been KO'd by

Even Yoshihiro Takayama, who sells like a statue, looked good taking it.

Obviously Nakamura doesn't actually knee his target in the face, but he does put his full weight onto them, often jumping threw the air to do so. Sliding the knee to one side of their head, he will use his shin as a frame on their chest (or across their back) and throw his weight down on them. The other wrestler is sent across the mat or down into it. The hip thrust is similar to that we all recognize from a traditional straight knee, except because the knee is already out of the way it is simply a shove with the shin. What is really interesting is that Nakamura—who until a few years ago was just a run of the mill Japanese wrestler doing the usual suplexes and slams—has put in the time to master this method and has showed a ton of variations upon it too from rising knees to intercepting knees to knees from the top or middle ropes.

He even got Sakuraba—who didn't throw a single decent knee in his MMA career—to pull off one of the more convincing intercepting knees I've seen done in pro wrestling.

Again, thigh makes most of the contact, chest is the target, but looks awesome from the first angle.

Of course the danger is that one day, someone's head will not be where Nakamura expects it to be and he will thrust his knee through their face rather than over their shoulder, sending teeth everywhere, possibly giving himself an infected leg, and making everyone very uncomfortable. And this is what has fans worried about his impending WWE debut. With so much effort taken to remove unnecessary risk to performers over the last decade and with bleeding now pretty much banned, is it really worth allowing Nakamura to chuck knees just past faces? It's that or ask him to perform without them, rendering him very much ordinary.  We'll still always have his match with Styles at Wrestle Kingdom I suppose... Bomaye!

A Pro-Wrestling School in Sin City