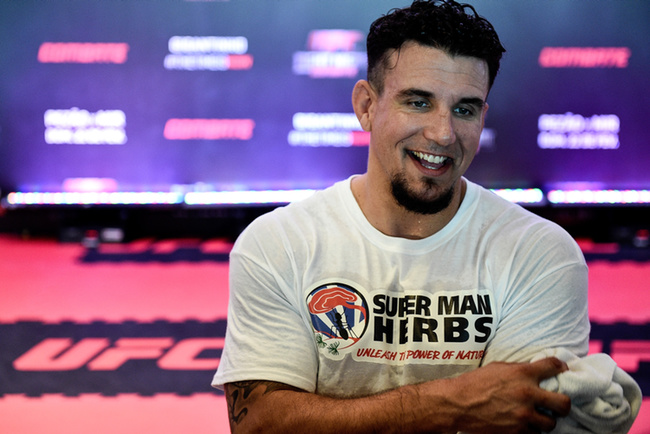 UFC Fight Night in Brazil didn't go well for the home team or for the favorites. In fact, had you parlayed the first six underdogs on the Porto Alegre card, you'd be 6.3 million dollars richer. If you had bet on all nine underdogs? Incredible. The night featured several surprise finishes, a great striking duel, and upset after upset after upset.

Bigfoot and Mir didn't make it out of the first round, but instead of a beating via Bigfoot's big strikes, it was Mir who landed a short little left hook to the chin, dropping the Brazilian giant and putting a stunning end to a night that baffled bettors and repeatedly silenced the Brazilian crowd.

Get used to this type of fight card. Guys you’ve never heard of putting on great performances, crazy odds, upsets, and new contenders emerging from out of the vast and growing fighter pool. This card provided some great finishes and a lot of buzz. Michael Johnson’s victory over Edson Barboza tossed his name in with some great fighters—he called out Benson Henderson—and Rustam Khabilov’s loss puts a bit of tarnish on the Dagestani (former?) contender. 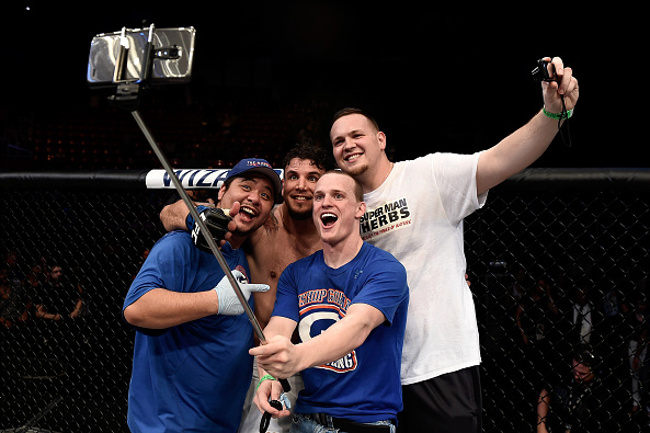 Bigfoot just hasn’t been the same since he had surgery to remove a tumor from his pituitary gland. He wasn’t aggressive in the 100 seconds the fight lasted, and the left hook that put him out didn’t look hard enough to end the fight so soon. But Mir’s boxing has improved, he took the time off and trained smart, and he looked and sounded very good in the fight and post-fight media action. There wasn’t really much to go off of, but in a fight between two vets with only a few more shots left in them, Bigfoot proved that he might be on the way out, and Mir made a case for a few more fights before he calls it a night. 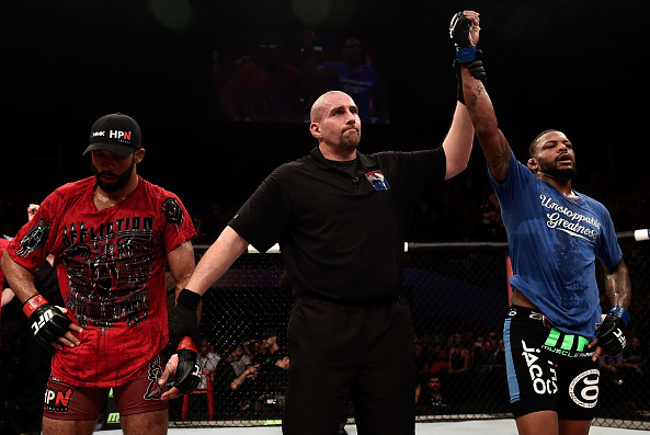 Johnson and Barboza duel it out, Johnson takes the UD

This fight answered a few questions. Barboza has a chin. Johnson is not a good boxer, he’s a great boxer. And yes, these men are two of the most active, accurate and dangerous strikers in the game. Johnson won the fight handily, but never really had Barboza in big trouble. He opened up a few small cuts under Barboza’s eyes, and landed some good shots from the top late in the third round, but neither man seemed overly hurt or tired when the bell rung. Nevertheless, it was a clear victory for Johnson. He was aggressive, pressured Barboza constantly, and went for the kill with every combo. He called out Benson Henderson. That would be a great fight to watch. 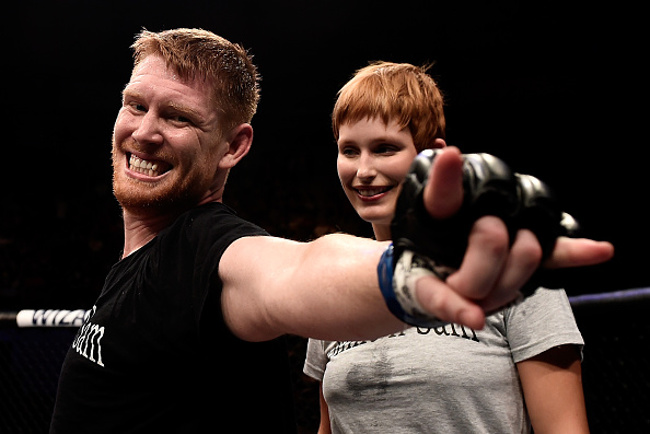 Another shocking exit for a jacked, hyper-athletic Brazilian with a diverse skill set in the Octagon. The fight was all Ferreira—kicks to the thigh, quick sharp jabs and straight rights—when Alvey finally landed a shot (4 strikes total) to the top of Ferreira’s head followed by a perfect left hook to the jaw. Ferreira was out cold and Smilin Sam joined the list of shocking overachieving underdogs in Port Alegre.

There actually wasn’t much wrestling in this fight, but when the two went to the ground, Martins handled the Dagestani just fine, which was a big surprise for everyone. On the feet, the fight was pretty even, with both men landing the occasional shot. There were very few combos and Khabilov’s kicks missed widely throughout the contest. It was Martins ability to stuff takedowns and get a couple of his own that ultimately helped him win, one of the two Brazilians to do so tonight. Rustam looked eager but flat, and his stock fell a bit following this loss, whereas Martin’s suddenly finds himself in the thick of one of the toughest divisions in the sport. 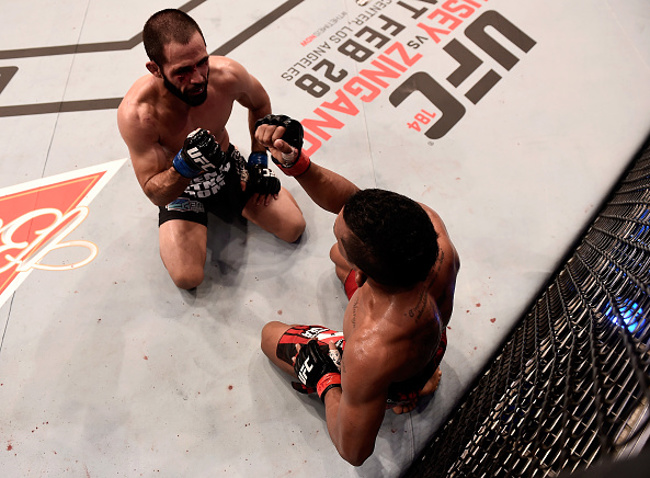 One of the biggest upsets of the night. Frank Saenz fought the fight of his life against a very dangerous Alcantara, winning on the feet (!), on the ground, and handing Alcantara a set back that will have him to the drawing board, wondering what to do when his powerful kicks, strikes and submission game meet a world class wrestler. For Saenz, this is a leap forward and a great performance that just underlines the importance of solid wrestling in any MMA match.

This was a great fight to watch. A back and forth battle between the aggressive Argentinian, Ponzinbbio and the athletic, sturdy American Sean Strickland. Strickland took a couple high kicks to the face, but he ate them and several other hard shots like cupcakes. Ponzinbbio was the aggressor throughout the fight, peppering Strickland with leg kicks, jabs and power shots while Sean seemed content to bounce out of reach and pop in for a few straight rights, and bounce back out. Close fight, but if Strickland wants to showcase his obvious talent, he’ll probably have to be more aggressive than he was tonight. 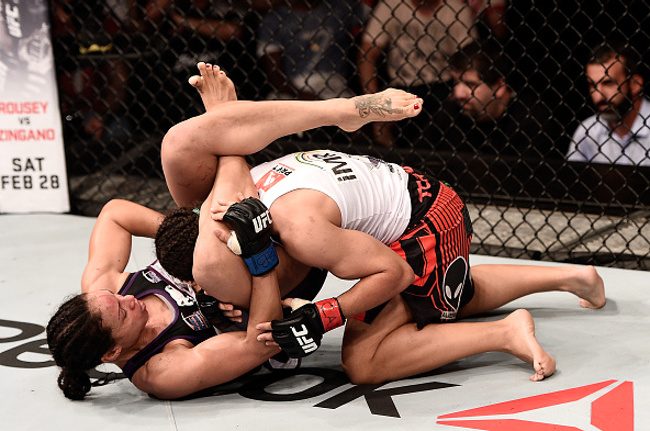 Another quick end to a Brazilian in Port Alegre. Andrade was landing shots and took Reneau down, but she landed right into the BJJ brown belt's guard and got caught almost immediately in a textbook triangle. Fights like these confuse the standings a bit, because Andrade was supposed to be a new fierce contender out of Brazil, while Reneau was headed out. Not the story anymore. Reneau said later that "this is my time,” and when the unexpected keeps happening, who's to say it isn’t her time to shine?

In the first of many upsets, de la Torre dominated the fight on the feet, repeatedly landing jabs and the left hook, until a leaping hook to the chin ended the fight. De la Torre put himself into the conversation in the featherweight division with this performance; Trator is now 1-1 in the UFC.

Patolino was a huge favorite going into the fight with Dwyer, but at 1:45 in the first round, the lanky former rugby player landed an amazing superman punch and put Patolino down. The ref was slow to move in, which meant an already out Patolino took three more blows before the fight was called. Hard to predict what’s going to happen any given fight, and Dwyer looked solid even before the superman punch landed... he came up big on a big night in a foreign country.

The first fight of the night was decided by a takedown in the final minute, and probably put Josh Shockley on the slow train out of the big leagues. Shockley looked good, and could have pulled off the upset, but his pace slowed, and Jorge, who was never hurt during the fight, put it away with timely takedowns at the end of rounds two and three.

Gibson had the better of Andrade early in the fight, cutting the Brazilian and showing good movement and accurate striking. He was knocked down in the second, and faded in the third when Andrade poured it on. Andrade seemed to gain steam after the cuts, and looked like the much stronger man, if not the more technical.