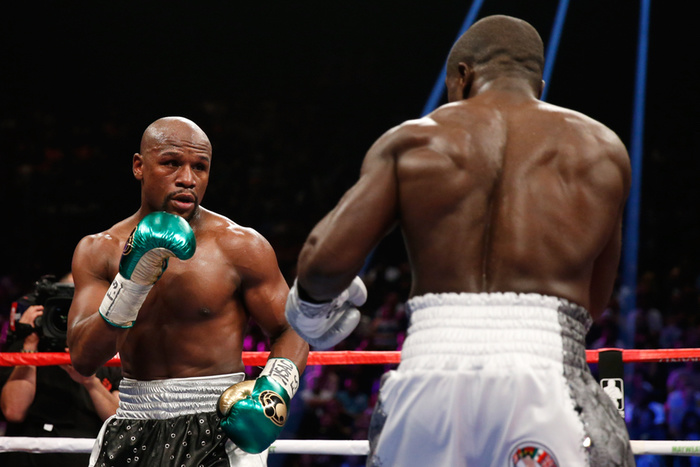 The highly unanticipated matchup between Floyd Mayweather and Andre Berto took place in familiar Mayweather territory of the MGM Grand in Las Vegas. Mayweather had gone under intense media heat over the week for the questionable pre-fight testing regulations in his last bout, and observers wondered if the pressure would affect his performance tonight. It didn’t.

But while the main event didn’t offer any surprises, the bouts leading up to the main event proved to be one of the best undercards seen on a boxing PPV. Here’s a recap for those who missed the action:

Showtime commentators mentioned Mayweather as an 18-1 favorite coming into the fight, the same odds seen by Julio Cesar Chavez when he lost to Frankie Randall in the same arena. History would not prove to repeat itself in this instance.

Mayweather controlled the first half of the fight with jabs and lead left hooks as Berto made the mistake of posing in the center of the ring and searching for the perfect shot, unleashing only one punch at a time. Action picked up towards the middle of the fight when Berto began putting some pressure on the champ against the ropes, but would overall be ineffective in landing anything meaningful. There were brief moments where Maywather was forced to fight a bit on the inside, but otherwise this was a glorified sparring session. Much of the action resembled Mayweather’s typical: pop-shot, hold. Pop-shot, hold.

To Berto’s credit, there was no lack of effort on his part as he gave a valiant effort throughout 12 rounds, but he never seemed to find an effective game plan against the ever-elusive Mayweather. The showing only further proved the gap in talent between the two men. In the last minute of the fight, it almost seemed as if Mayweather would try to put Berto away by landing a series of hard-hitting combinations, but then quickly put that notion to rest when he spent the last 20 seconds cruising (and at one point literally dancing) around the ring to celebrate victory. Scorecards read 117-111, 118-110, and 120-108 for Floyd Mayweather. In the post-fight interview, the pound-for-pound champ confirmed this to be his last bout.

What I do when I'm bored. Hehe

Roman Martinez and Orlando Salido fight to an action-packed draw

The co-main event of the night featured Roman Martinez rematch against Orlando Salido in what fight fans hoped would be a repeat of their action-packed meeting five months prior. Observers were not disappointed by the action.

Opening bell was called the 13th round of their first meeting, and the action lived up to that title as both fighters rushed out of the corners. Salido landed hard right hands down the middle and thudding body shots, as Martinez used side-to-side movement against the ropes to best avoid contact. In the 3rd round, both fighters scored a knockdown against the other – questionable score for Salido, more definite for Martinez. Rounds from the 3rd on carried blazing exchanges in the middle, and the bout exhibited great examples of inside combination punching. Both fighters would show moments of hurt, only to come back moments later in what was an absolute battle of attrition. There were moments where one wondered how it was possible for a human to take that much punishment and continue to move forward.

Salido out-threw Martinez in the bout with final punch out-put numbers reading 1037 punches for Salido and 691 for Martinez, yet both landed equally at 27%. Showtime announcers disagreed with the decision and had the bout scored for Salido. Both fighters showed disappointment in the post-fight interview, but were open to fighting a rubber-match in the future. Fans can look forward to a third installation between the two.

Second bout of the night saw Badou Jack making his first defense of his super-middleweight title against George Groves. Though Badou is the champion going into the fight, Groves actually ranked higher than the champion in the Ring magazine rankings. Groves had also made much pre-fight noise in his determination of claiming a title belt after his two failed attempts against Carl Froch.

Opening seconds of the fight showed both fighters game, but tentative. Shortly into the first round, Badou landed a clean straight right hand that stunned Groves, then landed another looping right to put him down for the count. Groves came back in the second and proved his cageyness. Beautiful back and forth exchanges from both fighters throughout the fight, and the action held up even though both sides became noticeably more tired approaching the championship rounds. Spirited effort from Groves, but not enough to come out on top as Jack won a split decision by scores of 114-113 for Groves, and 115-112, 116-111 for Jack.

This is Groves third failed attempt at a title and third loss of his career. Jack mentioned Lucian Bute and possibly Andre Ward as future opponents as he continues his title belt reign in the super middleweight division.

The evening’s event opened with former feather titlist Jhonny Gonzales facing off against Jonathan Oquendo in a 10-round super featherweight matchup. Though neither fighter has done much in the division, both fighters gave a solid account of themselves in what proved solid opening fight.

Both fighters came out of their corners fast and jittery, rushing each other back and forth around the ring. Flush uppercut to the chin put Oquendo down on the first round, but the Puerto Rican rose quickly and didn't seem bothered by the knockdown. Midway through the second, Oquendo returned the favor by landing a clean right hand counter that put Gonzalez down on the seat of his pants and the crowd came alive. Gonzalez refused to hold and the two put on brilliant exchanges for the remainder of the round.

The rest of the fight unfortunately did not provide as much drama as the fight's first two frames, but showed solid action and apt boxing ability. Scorecards read 94-94, 95-93 and 98-90 in favor of Oquendo. While most analysts could agree with either fighter receiving the nod, an 8-point win margin for Oquendo was hard to fathom.


Check out these related stories:

Freddie Roach Says Manny Would Beat Floyd in a Rematch