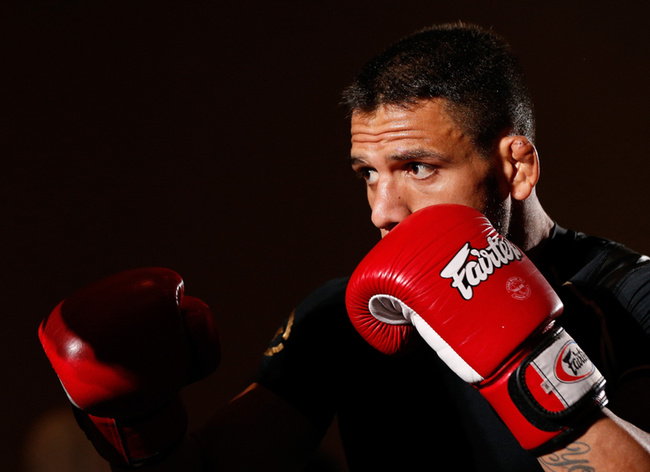 Rafael Dos Anjos is within touching distance of a title shot after back to back stoppage wins have propelled him to #3 in the lightweight rankings but standing between the Brazilian and the belt at UFC on Fox 13 is Nate Diaz.

While Diaz is probably the most notorious 155 lber on the roster he has not stepped foot inside the cage since last October and Dos Anjos admits he was not expecting to be offered this particular opponent.

“I was surprised because was out for almost a year. I would have liked to face a higher ranked fighter but there is only three guys higher than me, Pettis, Melendez and Khabib. Khabib is injured and Pettis and Melendez will fight for the title.”

This is the dilemma for Dos Anjos who is coming off a career defining first round stoppage win over former champion Benson Henderson. With the title tied up for at least another four months he could either sit on the sidelines and hope he’s done enough to earn the next shot or keep on facing contenders.

The 29 year old chose the latter option but he hopes that, with Khabib Nurmagomedov currently recovering from a serious knee injury, Diaz will be the final stepping stone on his path to the title.

“I think I deserve it, if I beat Diaz I'll be the number one contender and Khabib is hurt so I hope I am next, it has to happen.”

Diaz is currently languishing at #15 in the rankings but he remains one of the biggest names in the division and represents a high profile opponent for Dos Anjos, whose rise up the ranks has been comparatively low key.

In the UFC winning fights in itself is not necessarily enough, matchmakers are looking for mixed martial artists who can ‘move the needle’ like Irish featherweight sensation Conor McGregor but Dos Anjos does his talking almost exclusively inside of the Octagon.

An emphatic win against a well known lightweight like Diaz would be the perfect way for the Brazilian to propel himself from becoming a ‘Fight Night’ headliner to potentially competing in the main event of a televised or Pay Per View card and he feels it is an eminently winnable fight.

“I'm very confident in my game and nobody can stop me. Diaz has a good chin and good boxing but I think he is slow.”

Dos Anjos has a black belt in BJJ but it is his striking which has come to the fore in recent fights with a flying knee doing damage to Henderson which the former lightweight champion never recovered from.

After fighting four times in 2014 Dos Anjos has earned himself a holiday but he says the only trip he currently has planned is for training in Singapore.

“I hope to go back to Singapore next year to train at Evolve MMA because I can learn from the best Muay Thai guys on the planet and my striking improves a lot, you can see in my last fights.”

After 16 fights in the UFC he is something of a veteran but Dos Anjos has been the distance in half of them. However his rise up the rankings has coincided with some impressive finishes and the Brazilian feels this is an area of his game which he has improved on.

“Now my goal is always to finish fights. I never fight to win by decision but sometimes it’s hard to finish.”

Nurmagomedov is around five months away from his comeback and Eddie Alvarez’s hopes of being fast tracked towards a title shot were dashed by a recent decision defeat at the hands of Donald Cerrone, a result which made Dos Anjos’ recent win over ‘Cowboy’ look all the more impressive.

It means that Dos Anjos has plenty of momentum going into the bout with Diaz, which is set for the US Airways Centre in Phoenix on December 13th. He is coming off back to back stoppage wins for the first time in his UFC career, has fought three times already this year and feels invincible.

“I'm like a truck going downhill with no brake. Nobody can stop me!”

The Wait Is Over: Both Diaz Brothers Are Back

Nate Diaz, Khabib Nurmagomedov, and the Slow-Boiling Twitter Wars of 2014