Rafael Dos Anjos Is out of UFC 196 With Broken Foot. What Happens Now? 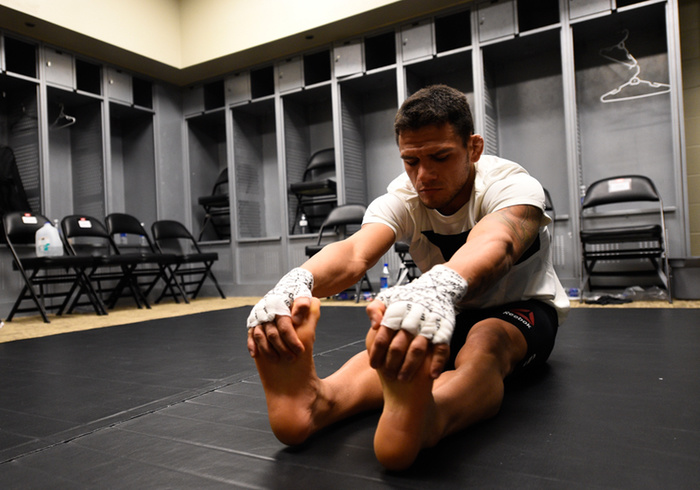 All of Conor McGregor’s humming of historical feats, his rhetoric of record-breaking rumbles and his guaranteeing of the gallows approaching for Rafael Dos Anjos has been in vain, as the UFC lightweight champion withdrew from their March 5 super fight this morning.

UFC 196 had been so appealing based on McGregor’s quest to make history as the first man to hold two UFC titles simultaneously. Now that Dos Anjos can no longer provide him with that opportunity, both McGregor and the UFC will have to decide where they want to go from here.

The news began to trickle through just before 6.30 am ET when Ana Hissa, the same Brazilian reporter that broke the news of Aldo’s rib injury in the lead up to UFC 189, tweeted that a Brazilian journalist Fabiana Mello reported Dos Anjos has picked up and an injury. About twenty minutes later, Hissa confirmed that the reports had been verified.

Shortly after Mello’s initial revelations, Ariel Helwani reported for MMAFighting.com that, “Dos Anjos suffered a broken foot late last week, forcing him to pull out of the lightweight title fight against McGregor. The UFC is currently working on finding a replacement to fight McGregor on less than two weeks’ notice, however, nothing has been finalized at this time.”

Rafael Dos Anjos joins Andy Ogle, Cole Miller and Jose Aldo who have pulled out of bouts with McGregor since he began his tenure with UFC. While some of the opponents have not shown up on the date they were scheduled to fight ‘The Notorious’, the Dubliner has always persisted and taken on different opponents.

Due to the proximity to the fight, we’re just ten days away from UFC 196, it is likely that UFC will want to get another challenge for McGregor announced as quickly as possible. With the amount of money that has gone into selling the “super fight” angle, they will want something to for the fans to talk about instead of the massive gulf Dos Anjos and his title will leave on the card.

Although it doesn’t appear as though there are as many Irish fans travelling over to Sin City ahead of the March 5 as there were when McGregor took to the Octagon at UFC 189 and UFC 194, the SBG frontrunner claimed that they were a big factor in him taking the interim title fight with Chad Mendes back in July.

Having put in the work and visibly added muscle to his frame, McGregor will want to compete at UFC 196. However, unlike UFC 189, it doesn’t seem possible that the UFC could make the March 5 meeting for an interim title.

If UFC makes this bout for a lightweight interim title, McGregor is clearly calling the shots behind the scenes. The were a lot of people that felt ‘The Notorious’ shouldn’t have even been given a crack at the interim featherweight title back in July, but the promotion had a lot more grounds to allow that stipulation with Aldo.

By the time he faced McGregor to unify the titles in December, Aldo had not defended his championship belt for 14 months. Previously, the interim option only became available when a champion had gone a considerable amount of time without a defence, but that does not apply in the case of Rafael Dos Anjos.

Dos Anjos lasted defended his title back in December with his emphatic first round win over Donald ‘Cowboy’ Cerrone, so it just wouldn’t make sense to give McGregor a shot at an interim belt. It is likely that McGregor will compete in a non-title fight on March 5 and if Dos Anjos is fit by July, there is no way Dana and Co would turn down the appeal of that matchup for their marquee event, UFC 200.

Whether McGregor can keep his headline billing without a title to fight for remains to be seen. With Holly Holm set to defend her bantamweight title on the same night, it could be a controversial move to leave him at the top of the card despite the fact that he is the undoubtedly the biggest draw on the card.

Although the shouts went up early for Frankie Edgar to step in and fight for McGregor’s featherweight title, Ariel Helwani dismissed the idea as he tweeted that ‘The Answer’ is currently injured. The fact that McGregor looks heavier than ever would make it very unlikely that he would drop down to featherweight on such short notice anyway.

Donald Cerrone is getting a lot of votes to be the man to step in, but having just fought on Sunday at welterweight, it seems like a very quick turnaround for such a dangerous bout. Although it has been done before and fans would definitely embrace the matchup, there is one man in particular that could sell this fight like no other.

Nate Diaz just seems like the man for the job. The attitude both McGregor and Diaz bring into a contest would make it a must-see encounter. To add to that, Diaz would bring a style to the fight that would see both men exchange leather in the center of the Octagon.

With all the talk of McGregor stepping up to welterweight to face champion Robbie Lawler should he win the lightweight strap, some have called for UFC to allow the Irishman to fight Lawler instead of Dos Anjos. While it would send social media threads into fever pitch, UFC making McGregor step up two weight classes without even dipping his toe at 155 lbs would not make much sense.