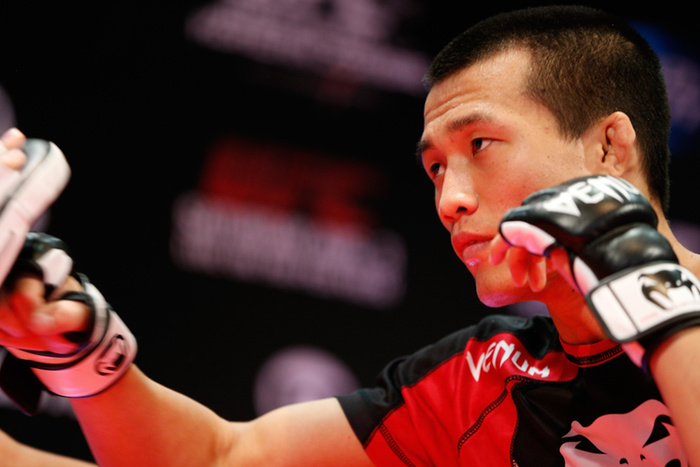 After a scheduled two years of military service, Chan Sung Jung is now somehow returning four years after he left. It is one of the most unique stories in the sport and it was tough on MMA fans. There simply was no way around the South Korean’s state mandated service, even if he was at the top of his game at the time he began it. Now, 1281 days removed from his failed UFC featherweight title shot, Chan Sung Jung, the Korean Zombie, is set to step back in the cage.

How Jung proceeds is likely to determine whether he is remembered as an unlikely Cinderella story or one of MMA’s greatest turnarounds. Jung made it to the big show just in time for the WEC’s first and only pay-per-view show, where he was matched against Leonard Garcia. In what was a disappointing familiar outcome to fans of the featherweight division at this time, Garcia performed most of his brutality against the air but still inexplicably picked up the decision. But the wild and wooly brawl had won Jung a lot of fans and the controversy may well have helped in getting his name out to Western audiences.

The Korean Zombie moniker seemed accurate. Jung seemed to just walk forward through anything. Attempting to slip punches completely naked, with his hands down by his waist, Jung could pull off brilliant counters or eat them on the flip of a coin.

In his next bout, the Zombie was matched with the towering featherweight, George Roop. Roop skewered Jung at distance with jabs to the face and straights to the body which winded the Korean. Jung was looking constantly for a leaning left hook and he always did so with no guard and his chin high in the air.

Roop noticed Jung was looking to counter with his left hook each time Roop stepped in, so the left high kick started appearing.

Finally Roop found his mark off a combination, connected flush on Jung’s unprotected head, and down Jung went: stiff as a board.

Typically you can try to hit slick counters with your hands down or you can walk forward constantly. Jung did both and it didn’t end well. Then something remarkable happened, Jung picked himself up from the loss and over the next three fights went from a man whose potential had apparently been reached to a legitimate contender for the UFC featherweight title.

After the UFC absorbed WEC, Jung was booked into a rematch with Leonard Garcia. It was a chance to right the wrong of the decision in the previous bout, though that wouldn’t bring back the win bonus. Jung looked a hundred miles removed from his previous self, standing back and using feints to attempt to draw openings from Garcia. Garcia, in turn, seemed more cautious than their previous bout. Jung showed some lovely variety as he slipped a lead, scored an uppercut counter, retreated, and shot in, only to come up and hit a beautiful foot sweep at the end of the first round.

Jung shocked the MMA world an announced his arrival in the UFC in emphatic fashion as he took Garcia’s back in the second round before switching to a single hook and applying the UFC’s first successful twister submission just seconds before the round’s end.

In his next bout Jung was matched against the formidable Mark Hominick. Hominick, a very skilled kickboxer, attempted to catch Jung cold off the glove touch with a leaping left hook. Jung looked cold as ice as he gave ground, bounced off his back foot and returned with a picture perfect counter right straight. A follow up on the mat saw the bout waved off and Jung had made history once again, tying the UFC record for fastest knockout at seven seconds.

In May of 2012, two years removed from the first Garcia fight, Jung was matched against Dustin Poirier and the two delivered one of the most entertaining fights of the year. Jung showed variety in his takedowns, his ground game, and his striking.

Jung got the finish with a D’arce choke in the fourth round and suddenly he was in title contention.

It was an emphatic turnaround from lunging in face first and taking one to give one. Jung got a shot at Aldo in August 2013 and was on the way to a convincing decision loss when his shoulder was separated in a bizarre counterpunch-turned-arm-crank. Injuries kept Jung out of a 2014 return and then it was off to serve his country.

Whenever a fighter returns from a lengthy layoff there are a lot of questions to be answered. For every Dominick Cruz there are a dozen others who lose a step. But along with the usual questions, Jung has a new one. How will he deal with a wrestler? Jung is coming back not to a tune up, but to perhaps the toughest stylistic match up of his career. Jose Aldo was able to take advantage of Jung’s lacking takedown defence through their fight even with a broken foot and while spending much of the time boxing. Aldo succeeded in five of his six takedown attempts against Jung. Bermudez is unlikely to waste time on the feet if he thinks the takedowns will come easily.

When we saw Jung contending with takedown attempts previously he was creative with his answers but he just wasn’t fighting great takedown artists. The rice bail he hit on a stunned Dustin Poirier was unforgettable but tells us little about what he can do against a wrestler with all his faculties.

We know that Jung likes to box, but how comfortably can he do that with a man who might at any point dive for his hips? Jung loves the naked right low kick, but that’s just too easy to be giving to a decent wrestler. In his last four victories Bermudez has hit seventeen takedowns, but in the middle of those victories are two losses in which Bermudez managed just one takedown between both. It is clear what Bermudez wants to do, and has to do to be effective. Perhaps this will play into Jung’s love of using the short jumping knee as a counter strike, but Bermudez is unlikely to have forgotten that trick from his horrifying knockout loss to Jeremy Stephens.

Chan Sung Jung will likely always be a fan favourite, but his accomplishments can be summed up in three victories. Perhaps he was on the way to being something great before his injuries and military service took him out, perhaps he was always set to be a flash in the pan. Jung was capable of moments of genuine brilliance and instinctive, in-the-moment creativity but he was also far from a complete product and was largely untested against the exact type of fighter he returns against this weekend. It will be an uphill battle but if he can look competitive it will be a pleasure to have the Korean Zombie back and yet another big name for the increasingly stacked featherweight division.

Masvidal vs. Cerrone: Controlling the Inside Line