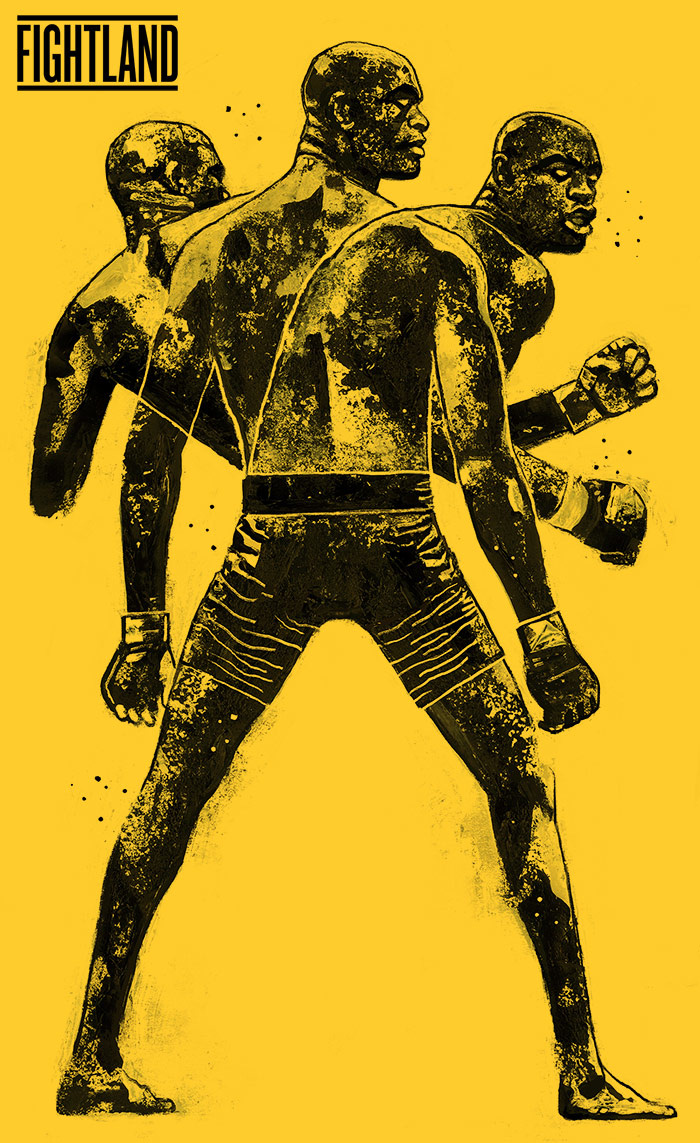 The main events of British UFC cards have been lacking star power and straps in recent years. We went from hosting the light heavyweight title fight between Quinton Jackson and Dan Henderson in 2007 and the lightweight title fight between B.J. Penn and Joe Stevenson in 2008, to a series of fights with 'title implications', to Michael Bisping fighting whomever Michael Bisping seemed able to beat. Bisping versus Leben, Bisping versus Akiyama, Bisping versus Leites. A few years back we got a Renan Barao title defense because he wasn't drawing views anywhere else, but the headliners of the last two UFC cards in England were far from top-notch fights. Most recently, Alexander Gustafsson took a tune up against the talented but significantly overmatched Jimi Manuwa, and the year before that we were scheduled to see Bisping versus Mark Munoz before Bisping was forced to pull out and was replaced by Lyoto Machida at short notice.

And so UFC Fight Night: Silva versus Bisping marks a happy change of pace. Yes, it's Bisping again, but this time he's fighting a genuine superstar. A provable pay-per-view draw. The man who many believe to be the greatest mixed martial artist who ever lived. Anderson Silva is coming back to England for the first time since his Cage Rage tenure and it is a huge deal. And you know what is even more interesting? Michael Bisping might just beat him.

Now the jury is out on whether Anderson Silva is physically 'done'. As soon as a great fighter loses, everyone wants to call him a wash up. It's a natural reaction when you see a hero fall, you start with the 'if that guy had met prime Silva' stuff and it all gets very wooly. A fighter's prime is often largely imagined—physical prime and fighting prime are not one and the same. Silva was far past the age of the general 'athletic peak' when he began his career turn around. A fighter can fight better or worse based on how stressed he is, what techniques he is into at the moment of the fight, and a heap of other things.

I've written about it a fair few times before but I'll reiterate: when Anderson Silva suffered his pair of disastrous losses to Chris Weidman it was because Chris Weidman is a stylistically horrible match up for Silva at any stage in Silva's career.

There is a tendency in mixed martial arts to start the stuff that is so common in boxing: 'pfft... a prime [insert champion from ten years ago] would mop up in this division'. In boxing and kickboxing, that's a less dangerous way to think because those sports have been around so long and the meta does not shift all that often. But MMA is a very young and volatile sport which provides a tremendous amount of freedom in approaches. Mixed martial arts has changed more in the last four years on a tactical level than boxing has in the century. The value of an uncommon knowledge is so  tremendously strong in mixed martial arts, the entire sport was built around it!

We look back at Royce Gracie and it is safe to say that he would not have stood a chance against any modern mixed martial artist within thirty pounds of his weight. Guys know jiu jitsu now, they know how to stop the sloppy takedowns he utilized, they know how to smother the meat and potatoes set ups he used from his guard. But Royce Gracie brought an idea to the fore—the clinch was going to happen and if it did, you better know how to deal with him on the ground.

Bringing a new weapon to the table, or new value to an under appreciated one, can carry a fighter's career. Think of Chuck Liddell's wall walk. Think of the rise of snap kicks and side kicks which is currently going on. Well, Anderson Silva was like that. He benefited from the tremendous undervaluing of lateral movement and retreat in mixed martial arts at the time—particularly in the cage where the corners are so shallow.

The other great principle he brought to the front of the stage was counter striking. It had existed in MMA up to that point, of course, but Anderson Silva recognized that the state of striking technique and strategy was so sloppy in MMA that he could invite blows and hit opponents as they dropped their hands and over-extended. Combine that movement with counter striking and you had a man who broke the mold of the MMA striker. Counter punching and fighting on the retreat, rather than while advancing, went hand-in-hand and Silva was able to mitigate the threat of takedowns with movement rather than in the traditional and extremely tiring style of striking in MMA at the time—move forward hitting hard, sprawl hard when challenged with a takedown attempt.

But think back to every phenomenal counterpunch that Silva ever landed. They were the result of undisciplined opponents, lunging in face first. The legendary Forrest Griffin knockout came as Griffin ran onto punches time and time again—never recovering from his blows, never moving his head, always being a target whose hands were never at home.

As did Sonnen on the sole notable counter in their second meeting. And Dan Henderson leaned well forwards at the waist and never recovered from his swings.

Yushin Okami was considered by many to have an excellent jab but really just stepped in with it again and again, there wasn't much subtlety like say, a Georges St. Pierre jab. Check out this instance of Silva standing in front of Okami and telegraphing his intentions twice before Okami plods in anyway.

So when Chris Weidman came along, stayed on top of his feet, didn't lead with his face, jabbed and feinted without overcommitting and threw the heavy punches only when he sensed Silva's frustrations, he became a nightmare. The simple fact that he didn't lunge wildly when encouraged frustrated Silva no end—the fact that he also excelled in the clinch and on the ground made it even worse.

Notice that Weidman is always ready to evade a return.

But Nick Diaz surely isn't the defensive fighter that Weidman was. This is true, but his punching form is sharp and his pace is torrid. He'll get hit with blows, especially in the early going of bouts, but it is always his hands that are leading. He and his brother Nate can often be seen triple or quadruple jabbing exhausted opponents across the ring, before moving safely into the infight. There is no running to close distance. Of course where Diaz consistently lets himself down is in his lateral movement. If a fighter doesn't mind his manners, he'll end up on the fence against Diaz and eat a salvo of twenty or thirty blows. But if he religiously breaks the line of retreat and circles out, a fighter will be able to stay in the center of the Octagon and frustrate Diaz.

So Diaz advanced and Silva circled. Silva put in some point work in combinations, and he'd slap on the double collar tie occasionally but only to turn Diaz past him. It was quite clear that Silva is struggling to find the opportunities to counter clean and against men who are willing to feint, willing to throw out dozens of punches without a care if they land, and determined not to let their head get ahead of their feet. I suspect he always will. It would be interesting to see how Diaz would have faired were he naturally a slightly larger man, more suited to middleweight and not giving up so much strength in the clinch. He could have made Anderson Silva's life just as hard as he did Paul Daley's right here:

It was, however, refreshing to see Silva work so much on offense. The Leites, Cote, and Maia bouts stand as a record of how averse to leading he used to be. He has some nice set ups hidden away in his bag of tricks, he has always just been so tentative to use them. Against Nick Diaz he actually showed a good few of them.

It might be difficult for some fans to accept but certain fighters are always going to make certain things difficult, things your favorite fighter might have built their game around. Not all of your favorite fighters' losses are due to their age or disinterest or lack of focus. Everyone knows about my love of Fedor Emelianenko, but exploding out of submissions from the guard wasn't going to work forever—it took the disciplined grappling genius of Fabricio Werdum to demonstrate that though. At some point, someone was going to come along who didn't lunge wild, and who—unlike Patrick Cote, Thales Leites and Demian Maia who all turned Silva very conservative by refusing to lead—could actually tag him up on the feet.

How does Michael Bisping stack up as a Silva opponent then? Well he does love volume, and he works off of the tight one-twos, in fact most criticize him for being one note. Personally my favorite work of Bisping's is actually done in the infight. The dirty boxing from the 'lace' (the position where both men have missed their jab over the other's lead shoulder) and the palming that he did against Jason Miller was absolutely beautiful. And the majority of opponents he has finished have found themselves on the receiving end of collar tie knees.

Who knows how viable 'the lace' it will be against the predominantly southpaw Silva, but it was always one of my favorite nasty touches in Bisping's game.

Here's a neat little sequence from the Miller fight. Miller ducks the slow jab, Bisping assumes the “lace” position with the hand behind the neck, lands an uppercut and a right hook as Miller stands up. Then Bisping pushes Miller's head back and throws a right hand.

On the other hand, against the rangey Luke Rockhold, Michael Bisping looked vexxed and wound up running in and reaching to catch him. Rockhold being so tall and fighting from such a long stance means that he can retreat on a straight line from opponents with more success than he would have against an opponent of the same height and length, and it frustrates almost everyone he fights. When Rockhold gives ground he will look constantly for the check hook and he hammered Michael Bisping with it a good few times.

Here Bisping is struggling to reach and getting frustrated.

Here he breaks stance to run, the exact sort of thing that Anderson Silva adores in an opponent.

We know that Anderson Silva will be looking to dance away, and only standing still when he wants Bisping to lead. What we don't know is whether we will see a frustrated Bisping, chasing The Spider, or the Bisping who comfortably pressured men like Cung Le to the fence and battered them when they showed a moment of weakness.

With that being said, there still exists a habit in Bisping which Anderson Silva can and might well exploit on offense. Bisping will retreat and throw jabs while retreating to little effect, with his shoulders low and his head high.

It has seen him clipped with overhands a couple of times when he gets his distance wrong, but against Anderson Silva it is worth being concerned about the high kick. Against Yushin Okami, Silva convinced Okami to parry a straight, then turned his hand over and dragged the parrying arm away from Okami's guard—allowing him to sneak the high kick over the shoulder.

Whatever the case, this is the biggest fight of Michael Bisping's career and he can be disciplined and conditioned enough to make it a slog. Whether he will be able to stick to his guns and not give away the easy counters once Silva starts his jogging and dancing remains to be seen. Get back to Fightland on Monday for the post fight breakdown.