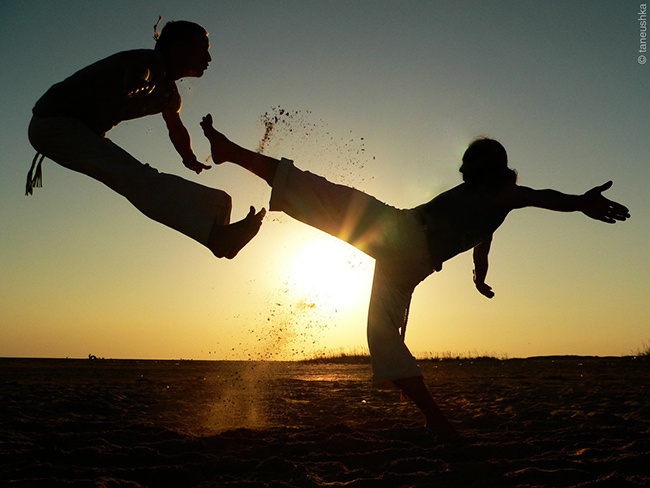 In our age of rapid-fire information, instant opinion-making, and quickly rendered blog posts, it’s good every once in a while to sit back and reflect, to reconsider the things we’ve thought and open ourselves to the possibility that at some point in our lives we may have been wrong about something. I consider this a great way to become a better person, and more importantly a great way to convince other people you’ve become a better person, which is more important.

In that spirit I’ve been thinking about some of my opinions in light of recent happenings in the world of mixed martial arts, one of which I wrote about for this site last week, the other it had never crossed my mind to write about ever—the kind of theory I’d developed years ago and promptly forgot after assuring myself I couldn't possibly be wrong.

Last week I wrote a story about the August 3 UFC fight between featherweight champion Jose Aldo and Chan Sung Jung, a fight that Aldo fought most of with a broken foot but that didn't end until the fourth round, when Jung dislocated his shoulder. Reflecting on my own experience sas an MMA hobbyist I said that the two men’s willingness to fight through garish injuries reminded me of my (and my fellow trainees’) predilection toward pain, that I felt a kinship with them, that in my own small way I was like them and that we who train come to not only accept the pain we suffer on a daily basis but also love it--and miss it when it’s not around. “In most circumstances,” I wrote, “fine would be the ideal state for a body, but I never feel quite right when I’m free of pain. On placid days like those my body feels disconnected, both from my brain and the world. Fine always feels a bit like what I imagine death will be: the absence of sensation and feeling. It’s a cliché, but when I’m hurting I know I’m alive.”

At the time, this seemed reasonable enough. Aldo had a broken foot and Jung a dislocated shoulder, both of which sounded awful but still within my realm of experiences. I've felt shoulder pain before, foot pain, too. But over the course of the last week more reports came trickling out from the MMA media about the other injuries the two men had suffered as a result of the fight and it made me realize that, no matter what I might tell myself, there is a difference between me and them and there is a limit to the kind of suffering I’d be willing to put myself through for the chance to feel more alive.

Consider this: Aldo not only fought for more than 15 minutes with a broken foot, he also fought through kidney stones, most likely the result of the dehydration he put himself through to make weight. Aldo celebrated his victory in a Brazilian hospital, but at least he had a championship belt to cushion the blow. Jung not only suffered the loss and that dislocated shoulder; he also broke a foot (which ballooned, like Aldo’s, to garish size) and his orbital bone. That’s the one that protects the eye.

As the casualty list from the fight grew I began to reconsider the story I’d written Monday. Now I look at what Aldo and Jung went through and my admiration is tempered by something like sanity. Any delusions I had about my sense of connectedness with them, about our sense of one-ness, has dissipated dramatically. I’m still the kind of guy who “feels better when he feels worse,” but I can feel my sense of camaraderie dying away. I always believed that fans connected with MMA fighters on a more instinctual level than they do with football players or baseball players because we can imagine, in some small way, being like them. Now I’m not so sure. I’m beginning to think they’re quite crazy.

My second consideration of the week may not even be necessary—I never wrote anything about it so nobody knew about it or needed to know–but we live in a confessional age, and I believe is something like redemption, so like a sinner dipped in holy waters, I want to get clean.

I went to Wesleyan University, a ragingly liberal liberal arts college in Connecticut where the virtues of multiculturalism were loudly embraced. West African drumming, Eastern European folk dancing, tribal languages: Everywhere you looked at my college you found students blurring cultural lines and dabbling in faraway traditions and rituals. I loved it, and I took part as often as I could. I played bells in a Javanese Gamelan orchestra; I meditated; I embarrassed myself in the folk dance styles of numerous third-world countries.

But I drew the line at Capoeira, the Brazilian dance/martial art. I knew and respected the fact that slaves had developed it to learn to fight and that the dance element was there to throw off slave owners who would have shut down anything resembling slaves training to fight, and probably kill any of the slaves doing the training. But there was something ridiculous about watching a bunch of privileged college kids tossing and turning outside the student union, cartwheeling and somersaulting and pretending to themselves that they were learning how to fight, while berimbaus and hand drums rattled and other students shuffled by to pick up their mail or a sandwich. I never saw any real contact, and besides, the kids that loved capoeira most were always the ones who were least interested in the actual act of physical confrontation. They were hippies, is what I’m saying, and I couldn’t stand hippies.

Unmoored from its history and revolutionary purpose, capoeria seemed like a manifestation of the worst kind of cultural whitewashing, brutal history reduced to a self-help exercise, a "blending of mind and body." Its meaning was gone, as was the blood and the pain--the life--that went with it, replaced by something safe. The ease with which anyone could get involved in capoeira, and the lack of physical consequences to doing so, made me scoff at the Wesleyan capoeira club and capoeira in general. Surely nothing you learned in the middle of a dance routine would help you in an actual fight. Surely these were just kids dabbling in a delusion. And once I became a fan of mixed martial arts years later, I felt my suspicions about the impracticality, the absurdity, of capoeira were proven absolutely true.

Well, I was wrong. Mea culpa:

Sweet Pain With Jose Aldo and the Korean Zombie