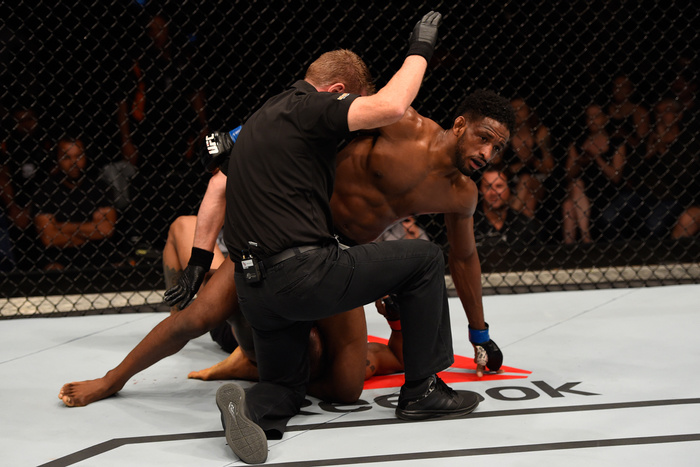 The UFC is leading the line in terms of legitimizing mixed martial arts, but what happened in the promotion’s co-main event in Brisbane last weekend will give MMA’s contrarians plenty of ammunition for their dressing down of the sport.

An avid spectator of the sport for the majority of my life, there isn’t a lot of things that can make me literally look away from a fight while it’s happening. However, referee Steve Perceval’s failure to stop Neil Magny’s mounted assault on the returning Hector Lombard on Saturday night in the second round of their welterweight contest provided me with one of those rare moments.

It appeared as though Perceval was literally testing the boundaries of a human durability as he let Magny pour on grounded shots to the former judo Olympian, who remained completely still for sections of the bludgeoning. The unanswered blows came in the last ninety seconds of the round. Magny would set a record for his output of 142-grounded strikes in a single frame, and somehow Lombard would make it into the third round.

When he walked out for the third the cumulative shots that he had absorbed had visibly affected Lombard. Not only did he stumble every time Magny landed any sort of strike, he seemed to wobble as he threw his own shots as well.

John Anik explained on the broadcast that Perceval had told Lombard that he wouldn’t allow him to take the same punishment in the final round. The statement itself seemed strange given the amount of opportunities he had to stop the fight in the second, but the referee finally stepped in when Magny effortless moved into a mounted triangle and restarted his fistic fury.

Sometimes, writers can be guilty of hyperbole after the fact when something like this happens. Similar incidents can be explained away by experts in MMA refereeing, but based on Marc Goddard’s reaction to the non-stoppage, Perceval was clearly at fault during the sequence.

The English referee looked on in bewilderment as Perceval failed to call a halt to the proceedings during Magny’s second round annihilation of ‘Showeather’.

After the event, Tom Wright, the UFC’s managing director for operations in Canada, Australia and New Zealand, expressed his concern with the incident too.

“We were a lot concerned,” Wright said, as transcribed by MMAFighting.com. “I think (Magny) said it best. It’s the referee’s job, is to make sure that a fight is stopped, that the athlete can protect himself or herself. I’m sitting not quite as close as the referee was, but I thought that fight should’ve been stopped and it should’ve been stopped a long time before.”

Incidents like Perceval’s second round non-stoppage in Brisbane are terrible for the growth of the sport. No person in their right mind can try to tell me that Magny didn’t do considerable damage to Lombard based on Perceval’s error.

The unanswered shots shocked the watching world. MMA has had a particularly hard time in Australia already, so it’s unlikely that Perceval’s performance has helped the cause. This is a country that failed to allow Soa ‘The Hulk’ Palelei visit sick children at Princess Margaret Hospital and participate in a photo-shoot after he raised over $43,000 for their facility, because of his career in mixed martial arts.

Of course, the most outstanding issue is the welfare of the fighters. It is intrinsic to a fighter’s nature to stay in a contest for as long as he or she possibly can, but referees are in place to stop a fight to protect the health of the competitors. Whether Lombard has suffered any long-term damage is unknown, but it appeared as though Perceval allowed him to take a lot more damage than was necessary.

Interestingly, in an undated interview with Australian publication MMA Sports Magazine, Perceval seems to wear his reluctance to stop of fights as a badge of honor.

Perceval said: “In the cage or ring, referees’ decisions are made in a split second and as I mentioned referees are there to protect the fighters, unfortunately sometimes knockdowns can look a lot worse than they are, so referees move in to stop the fight too quickly.

“We don’t get a second chance and any hesitation can result in a fighter getting badly hurt so unfortunately there will be decisions which end up controversial. I personally know how hard the fighters train and I don’t want to stop a fight prematurely, that’s why I constantly self-assess and review my performance as a referee.”

We can only hope that Perceval has to explain his actions to some overseeing commission and is shown why he should stopped the co-main event earlier. To allow similar showings to take place in the Octagon could have detrimental effects on mixed martial arts, and most importantly, the health of the fighters.