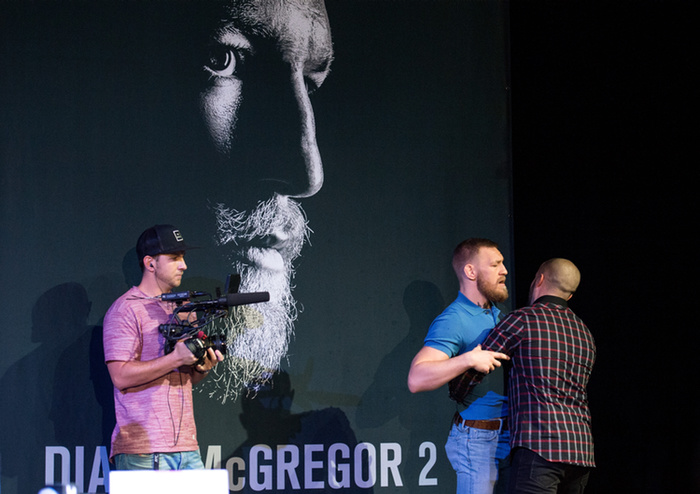 On Wednesday, October 12, Dave Sholler announced that he would be leaving the UFC for a communications position with the Philadelphia 76ers. Dana White first dropped the news of the current UFC Vice President of Public Relations, Athlete Marketing and Development’s employment status while discussing the game-changing departure of Joe Silva on Fox Sports 1’s TUF Talk, saying “Dave Sholler just announced that he’s leaving—another guy who I love and respect and loved working with—so yeah, it’s going to be different, but there’s a lot of good things going on.”

MMA Junkie later confirmed the story with Sholler himself, who told the publication that he will sticking with the promotion until UFC 205 takes place at Madison Square Garden on November 12 before moving on to the world of the NBA. “This is a tremendous opportunity for me personally and professionally. It gives me the chance to go home to work for an organization I grew up rooting for, an organization that I’m incredibly passionate about, and an organization I believe is going to add to its storied legacy in the coming years.”

The career change will give Sholler, a New Jersey native who joined Zuffa and the WEC in 2009 before moving over to the UFC, the opportunity to move his family back home. “As the years have gone by, I’ve learned more and more that family is the most important thing in the world, period,” Sholler said. “To be able to raise my daughters back home on the East Coast surrounded by family is something I’m really fortunate to be able to do.”

The move also, presumably, will give him the chance to unwittingly find himself in the middle of any more improvisational violence. Basketball might have its own PR issues, but at least the sport’s press conferences have less of an increasing propensity for theatrical violence and inanimate object-hurling than its UFC counterparts, which means that we’ll probably see far less of Sholler tossed between two highly-trained and highly-confrontational men like a peacekeeping rag doll. Which is really great for his personal wellbeing. But a little less great for the MMA meme-making machine.

So, as we in the greater MMA universe prepare to say goodbye to the man and the myth, let’s take a moment to celebrate the moments at which Sholler’s public persona went from recognizable presence behind the scenes to a Charles Robinson-esque figure in the UFC’s more showy flirtations with ‘wrasslin-level spectacle.

By now, we all know what happened by heart: proverbial nemeses Cormier and Jones got too close for a contentious face-off. The former, in an uncharacteristic move at the time, shoved the latter. Jones pushed back both figuratively and literally. Sholler, who was filling in for a vacationing Dana White, tried to step between the pair to prevent things from escalating. The rest is history that has been recorded, written about, and re-envisioned from every possible angle.

There were the actual videos of the event:

And then there were the memes. (You can still add your own to the canon with this handy Dave Sholler meme generator.)

Sports Center, clearly not impressed with his performance, even game him the dubious honor of a place on their NOT Top 10 List.

Upon returning from vacation, White defended Sholler’s actions, pointing out that it was his first time in the middle of the staredown and White himself might not have fared much better: "As soon as Jones went up and their bodies touched, I would have separated them. Sometimes you'll see me put a hand in, or sometimes you'll see me do something else. I would have separated them. It was the head butt, Jones headbutted Cormier—that's what upset [Daniel] and made him push him back. I would have got my arm in there before that contact was even made. I would have seen the contact coming and I would have stopped it. Then I would have been right in the middle. Would I have stopped that whole thing from going down, who the fuck knows? I wasn't there. When those guys get up there and you have the mentality of a fighter, and not everybody is the same. There are some guys who can go up there and can stare at each other and it's all good, and then there are guys where there can be any little thing that can be off, or something that was said leading up to them being face to face, and anything can happen. These guys are fighters, man, they're ready to go. And that's what makes the weigh-ins so amazing and why I love it so much. Those staredowns, there's nothing fucking like it."

Return of the Sholler

As far as sequels go, Sholler’s second appearance in the middle of some alpha male shenanigans—in which he attempted to restrain Conor McGregor at the now infamous UFC 202 press conference this past August—was no Godfather II, but it wasn’t exactly a pale retread unworthy of the “Sholler tries to break up fights” franchise, either.

Things just got real between Diaz and McGregor at the UFC 202 press conference. pic.twitter.com/cxD8yYBl4W

And, as Uproxx’s Jared Jones in his “Jack Slack-esque breakdown,” An Incredibly Serious Breakdown Of UFC PR Man Dave Sholler’s Ever-Improving Grappling Technique (which is really worth reading in its entirety), it also allowed the Sholler character to evolve.

“Did you see it? Whenever McGregor tries to break loose, Sholler cuts him off at the pass by placing his left foot between McGregor’s. I don’t know how many times I’ve heard Joe Rogan wax on about the importance of keeping your lead foot in between your opponent’s to not only open them up to inside leg kicks, but make it far easier to set up a power double leg takedown if needed, and clearly the Sholl-man was listening. Had Conor shifted his weight to his back leg, he would have even been able to take him down with a Karate-style driving foot sweep if he so desired. Instead, Sholler opts to just strong arm McGregor off stage like the fucking savage that he is while Dana White just stands there like a dope,” Jones writes.

Sadly, though, we’ll never see the next step that Jones predicted when he declared that “Sholler 2.0 is here to bang, bro, and every fighter from featherweight on up to welterweight would do themselves a favor to take notice.”

But God help the 76er who dares to start something at a press event after November 12.

Worse Things Have Happened in the MGM Grand Lobby