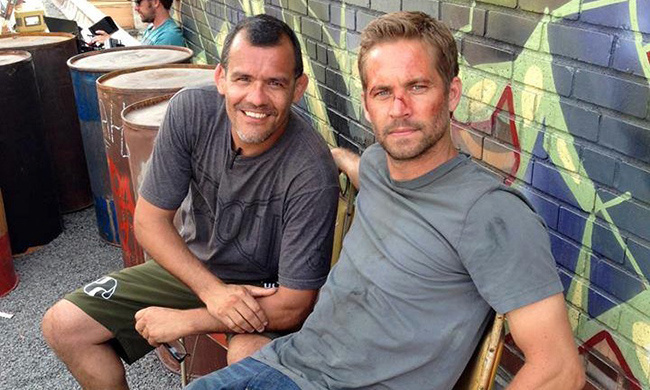 Miller and Walker on set.

On Saturday, Nov. 30, actor Paul Walker, the star of the Fast and the Furious franchise, died in a car accident in Santa Clarita, California. He was 40 years old. In addition to being an actor and philanthropist (when the crash took place Walker was coming from a fundraising event for the charity organization he started, Reach Out Worldwide), Walker was also a longtime jiu-jitsu student and a brown belt under Ricardo “Franjinha” Miller. We contacted Miller at his home in Santa Barbara, California, where he has been the patriarch of the Paragon Brazilian jiu-jitsu team since 1997 and where, for nearly a decade, he was Paul Walker’s friend and mentor.

Fightland: When did Paul start training jiu-jitsu with you?
Ricardo Miller: Like most Americans he found out about jiu-jitsu when he saw the first UFC. He saw Royce [Gracie] and he said he thought, “Hey, I think I can do that BJJ thing!” He could see himself doing because he liked to fight. When I talked to his family at the memorial they all told me he used to fight from the bottom position when he would get in fights growing up.

In 2004 he came in to the academy for the first time. Some friends of his that had already been training told him to come train with me in Santa Barbara. He fell in love with martial arts right away.

How often would he come in and train?
Anytime his schedule was open he would train. He would come to the group lessons as well as private lessons with me. And whenever he traveled he would call me. Like if he was in Hawaii, he would call and I would tell him where to go train: “Go to this guy, or go visit my friend here.” He gave it as much time as he could.

Was he more of a jiu-jitsu guy than an MMA fan?
Yes, absolutely. He was in love with jiu-jitsu and was always trying to push his BJJ more and more. He wanted to be an ambassador in the sport. He would try to bring a lot of traditional moves to his fight scenes. He believed that in four to five years we would start to see more and more [grappling] moves in movies.

When he first started training, he was still new in Hollywood so it was hard to influence the choreographers. They always wanted more striking.  But he would always bother them about it and show moves on set. He would ask me to come out to sets to be his assistant and a personal trainer. He even flew me to Canada. I worked with him during the filming of The Death and Life of Bobby Z. I showed some positions for that movie–two or three--and some guard moves made it into the film.

In The Fast and the Furious series he did some guard stuff, but he really wanted to see more traditional BJJ, self-defense with traditional BJJ, become more mainstream. The arm bar and transition to the triangle choke is cool, but he wanted to find the moves that people would see and ask, “What is that?! I want to see how that guy did that! What is that move?” He loved the bow-and-arrow choke. He never had a chance to do it in a movie, but it was a personal goal for him.

What was it about jiu-jitsu that Paul loved so much?
He mentioned that practicing martial arts put him in a place where he could meditate and take his stress out, be comfortable, and focus on his spirit. For him it was like yoga is for some people. I was not so much a hobby-sport as much as it is a lifestyle.

What was Paul like to hang out with?
He never used his celebrity to get things from people. Never took advantage of people because of who he was, you know what I mean? He was that kind of person. That’s the thing that made us bond is that he’s a very simple guy, very humble and down to earth. He would never cut a line or anything just because he was Paul Walker. He was that kind of person, never took advantage of anyone. Always would take pictures with anyone who asked. He was never mad or angry, just an easygoing guy. That’s what made him fit in with us.

What will you remember about him as a martial arts student?
I’ll remember his tough guard, man! Be careful when you pass his guard! It was difficult to pass his guard. Watch out, it was going to come. Triangle, arm bar, take the back, bow-and-arrow choke.

I gave his black belt to his dad at the memorial they had for his family. I said, “Mr. Walker I want to give you one thing that I know Paul would be proud to have. He has been training long with me, almost 10 years.” I asked him if he wanted to put it in the tree at the crash site because I had seen someone put up a brown belt there. Or, if he wanted, he could put it in the coffin. But he said, “No way I’m going to take his home, I want to keep this because I know how much this means to him.” Paul’s a Paragon black belt now.