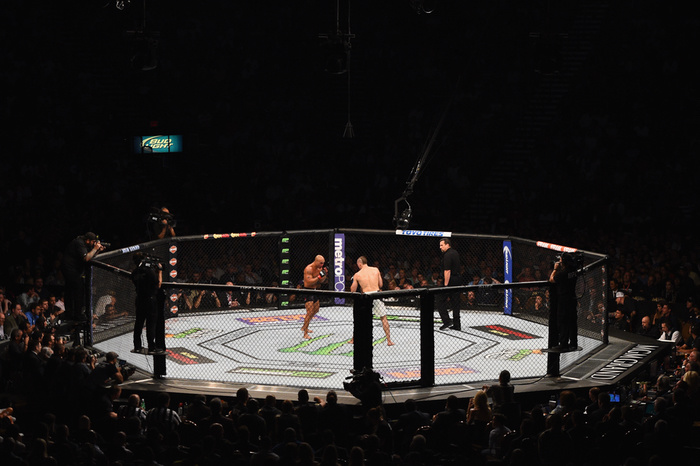 After 10 years as a mixed martial arts fan my heart has become hardened to the miseries that can result from a fight. Though I believe even after all this time I’m still a humanist with what I hope is a well of sympathy for those suffering, I can’t deny that I’ve become largely inured to the pain two human beings can dish out to each other within the regulated confines of a cage. Whether this is a good thing or a very, very bad thing—proof of a growing subtlety and sophistication in matters of morality and will and multitudinous humanity, or evidence of an atrophying sense of empathy numbed by countless hours spent watching other people harm themselves and others for my amusement—is a question for psychologists and neurologists and moralists to ponder. Understanding what MMA fanaticism is doing to my brain is above my pay grade.

Still (thankfully, I think) there are occasionally moments that pierce through my hard wall of seeming indifference, blasting through my cynicism or my technical fascination or my aesthetic admiration, and get right into my heart, reminding me of the consequences of fighting and watching fighting and, in its strange, backhanded way, providing me moments of deep, undeniable sympathy and sadness and emotional connection to my fellow man. Moments when the bell is tolling for me as much as it is the man or woman I’m watching. These moments are rare and getting rarer, but they do still happen. And thank god. When they cease to be that’s when I’ll know I’ve gone dangerously off the rails.

The last such moment, and maybe the most impactful, happened last year in July, during then-welterweight UFC champion Robbie Lawler’s Fight of the Year title defense against Rory MacDonald in Las Vegas. For four long rounds the two men fought a fight full of the kind of brutality and reversals of fortune and twists of fate and incomprehensible will and impossible endurance that fans live for, the kind of fight we tolerate 20 middling fights to have the opportunity to witness. The kind of fight (like Shogun/Henderson I or Ali/Frazier III) that makes fight fans believe in something bigger than the sport and convinces them that there may just be something meaningful, even spiritual, behind their nasty little hobby.

One minute into the fifth round of the fight, Lawler caught MacDonald with a left straight to the nose that didn’t seem worse than the hundreds of other punches he’d hit MacDonald with that night (which means it was awful beyond the capacity for most humans to comprehend) or that MacDonald had hit him with in return. This punch didn’t knock MacDonald unconscious in a flash or blast him to the ground. There was no great drama in it, nothing to marvel at. It just broke his spirit. Half a second after the punch landed, after raising his hand involuntarily to his nose (in pain? wonder? confusion? self-sympathy?), the challenger just sort of sat back on the ground, as if the punch has sent a message to his brain that enough was enough, that there comes a time when even the toughest men, trained to endure horrible things—who take pride in enduring them—are physically, emotionally, psychologically, and spiritually incapable of going on. I have no doubt Rory MacDonald wanted to keep fighting that night, but forces even stronger than he was took him over, forces of self-preservation and simple incapacity.

Watching MacDonald lie back almost gently onto the ground was a heartbreaker beyond what I’d ever experienced as a fight fan, something almost unbearable to watch—to see a fighter that vulnerable and that thoroughly broken, past the point of will to mitigate—a rare flash in a brutal sport of the most profound and undeniable human connectedness. Who could not feel a bond with Rory MacDonald in that moment? Who hasn’t at least sensed within himself the capacity for true, deep, unimaginable, and non-negotiable defeat? That we had been watching Rory MacDonald fight in the UFC since he was just a 20-year-old prodigy with boundless potential and an unnerving placidity in the face of horror made the moment even harder to bear. This was a guy raised from a pup in the UFC, a kid we watched grow up, now changed into a man in a flash by the most terrible knowledge existence can dish out: When life wants you crushed, you will be crushed.

Today, as Rory MacDonald prepares for his new life as a fighter in Bellator—the biggest name that promotion has yet managed to tease away from the UFC, arguably the first truly great fighter in his prime to make the move—it seemed right to honor the man we watched grow from a boy before our eyes, the man we watched change his nickname countless times in a quest for self-knowledge, from the Waterboy to Ares to the Red King (though always in our minds Canadian Psycho: the People’s Psycho!), the man raised by and in MMA (a terrifying notion), the flagbearer of a new generation of fighters who came into the cage not as specialists but as mixed martial artists all the way, a true child of MMA, by remembering not his greatest triumph as a fighter (his three suplexes of Nate Diaz, perhaps? or his brutal trouncing of B.J. Penn? or maybe his surgical dismantling of current champion Tyron Woodley?) but his most vulnerable moment in the cage. Strange to say considering MacDonald’s reputation as a cold, almost inhuman fighter, but he may have provided me the most human moment I’ve ever had as a mixed martial arts fan.