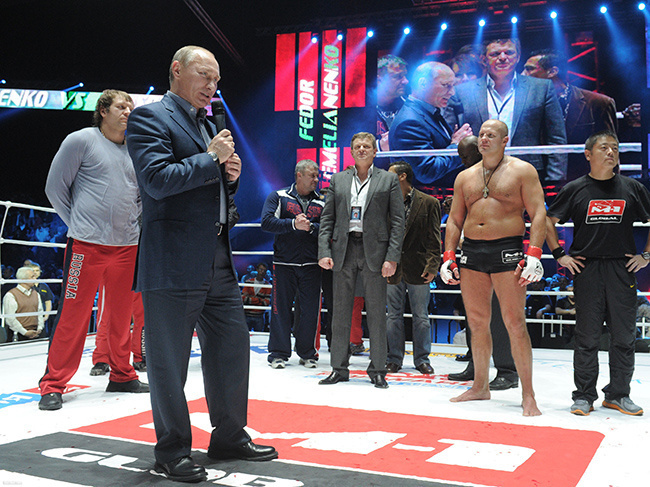 It’s difficult to imagine after watching Russaian President Vladimir Putin’s obsessively controlled and spectacularly orchestrated opening ceremonies at the Winter Olympics, but sometimes he just can’t help but let his inner-Kenny Powers out and ham it up for a crowd in less austere ways.

There was the famous time he staged photos of himself riding shirtless on horseback, that time he shot a gray whale with a cross bow, or the time he sang Blueberry Hill to American celebrities (who pretended to enjoy it) at a banquet. But while all of these various stunts have garnered ridicule online, never has Putin been objected to publicly, in-person, and had that objection broadcasted live on Russian state television. That is, except once, when mixed martial arts fans dared to boo the great man during an M-1 Global event in 2011.

The legendary Russian heavyweight Fedor “The Last Emperor” Emelianenko--on the downturn of his career but still a hero in his home country, and to Putin--had walked out to the booming nationalist folk-song Volga Boatmen, while images of him as a Russian soldier were shown on the big screens hanging all over the Olympic Arena in Moscow. Fedor then pummeled the life out of 40-year-old American ex-pat Jeff Monson like the cold Russian winter for 15 minutes straight. Putin was in attendance that night, and as an avid MMA fan and judoka, and  great lover of all thing Russo-masculine, he couldn’t help but get caught up in the moment. After Putin whimsically jumped in the ring to congratulate the champion (and generally act like a tough guy) the young Muscovite crowd of 20,000 reacted with jeers. The Moscow Times called it “likely the worst public reception of his political career.” Uncharacteristically surprised, Putin quickly regained his composure and called the MMA fighter a real "bogatyr," a word for a Russian medieval warrior. 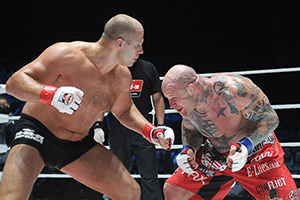 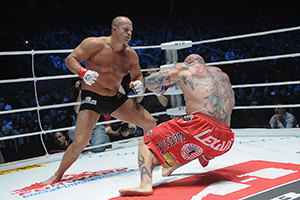 While booing important political figures may be a pastime here in the States, historically it’s not tolerated in Russia. And the Fedor/Monson fight had been broadcast live, so it was already too late by the time Putin had all subsequent replays of the event edited, censoring his mistreatment. Some reports said the booing was a result of people not being allowed to use of the bathrooms while Putin spoke, but most pointed to a growing general resentment of the authoritarian leader--and the fact that there were enough young, freethinking fight fans in the audience that night to break tradition.

Either way, the next day, Putin’s propaganda machine manufactured reports that the booing was directed at Monson, the fallen American, as he left the arena in alleged humiliation. The opposite was true, of course, (Monson is something of a folk hero in Russia, not to mention a dedicated anarchist), and Putin’s choice of reasoning just made matters worse. Infuriated fans took to the Internet and posted hundreds of comments on both fighters’ Facebook pages, promising that they had only cheered in respect for Monson, and that how dare Putin try to twist their love of the sport for political gain.

I can’t help but remember all of this as Putin jumps into the ring yet again--this time for real, to challenge heavyweight boxing champion Vitali Klitschko, the leader of the opposition party that just won a long and brutal fight for control of Ukraine. It feels reminiscent of that now-notorious evening at the Olympic Arena when an eager, over-masculine president couldn’t help but flex his muscles in a less serious, but equally telling, way. This week, as Putin unilaterally threatens Ukrainian sovereignty by invading the Crimean region, the world echoes the booing of the audacious Russian mixed martial arts crowd, while the people of Ukraine dare to challenge him.