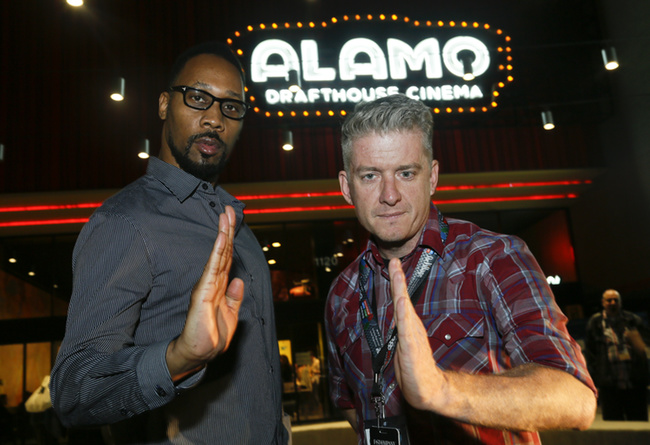 RZA is a serious movie geek. We get jaded by the entertainment industry’s hobbyists—actors who want to dance, models who want to sing, and MMA fighters who want to act—so that when someone displays real, palpable fandom, a passion that goes beyond dabbling, we sit up and take notice. I knew RZA peppered his albums with kung fu references, and I knew he was a playable martial artist in the Wu-Tang: Shaolin Style Playstation game. Yet, somehow, I didn’t fully grasp the true depths of his own personal fandom until I was seated a row behind him for El Rey Network’s screening of a restored print of the animal-style cult classic Five Deadly Venoms.

“I think I saw my first kung fu film at the age of nine years old. That was a Bruce Lee edit film called Fear the Other Dragon, and it wasn’t a ‘real’ movie. They took different parts of The Green Hornet series, cut it up, made a movie, put it in a grindhouse theater. It was a double-feature with a Jim Kelly feature called Black Samurai. I got addicted at that time, but then the following weekend, my cousins took me to 42nd Street in Manhattan, and they had a triple-feature kung fu bill. To my memory, it was Godfather of Hong Kong, The Fist of Double K, and maybe Hammer of God,” he told the small crowd at Austin’s Alamo Drafthouse.

“Even though I was enjoying what I was watching, they showed the trailer of Five Deadly Venoms and I was blown away [by] the imagination of the film, the fight techniques - the lizard, the scorpion, the toad. I read a book when I was a kid called The Five Chinese Brothers and in my mind? ‘Hey! They made a movie about The Five Chinese Brothers!’ Me and my cousins all saved up our nickels and dimes, bagging groceries at the local grocery store, and the next weekend we saw Five Deadly Venoms.” 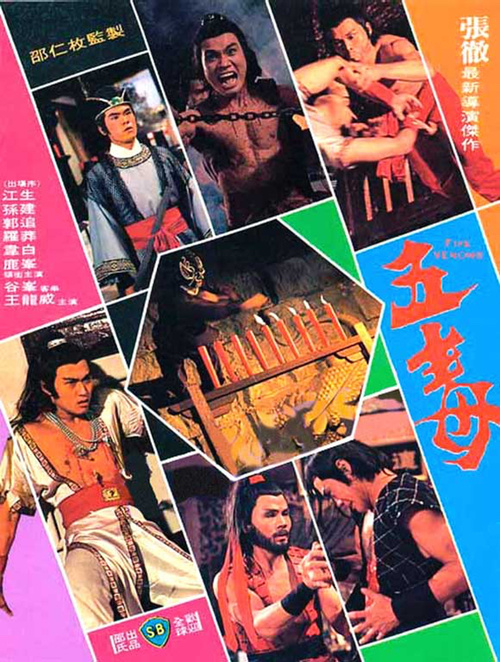 Director Chang Cheh helmed ninety-two films from 1950 to 1995; many of them, including 1978’s Five Deadly Venoms, for notorious Hong Kong producers the Shaw Brothers. The film is surprisingly light on fight scenes considering its reputation as a must for fans. A dying master sends his last pupil (Kuo Chue) to seek out the master’s former students, each trained with specific skills related to venomous animals (the snake, the toad, the scorpion, the lizard, and the centipede). He’s concerned that some of his more treacherous pupils may be planning on using their forbidden fighting styles to steal a treasure.

Chue’s character is kind of a bumpkin. He knows a little bit of each style, but isn’t good enough at any one of them to do any real damage. He follows a lead to a small town and starts asking questions right away like a dope, which only accelerates the villains’ plans to steal the treasure. The former pupils have complicated relationships where some of them know they were mutual students of the master but not all of them know each other, nor know that they all live in the same town. While some of the fighters are villains, some are not, and how those relationships play out is really what moves the plot—not the fight scenes, surprisingly enough.

Once the treasure is stolen and the police get involved, their individual identities and fighting styles quickly come to light. Each unique style gets a moment to shine, and the individual fights are short enough (and fierce enough) to always leave you wanting more. 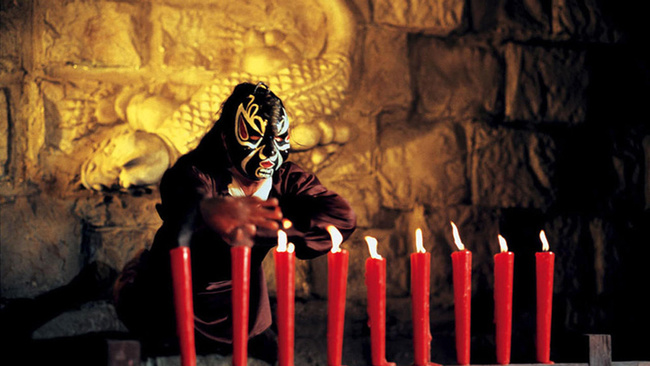 For RZA, they consumed him. “They’re bad ass. You see these guys sticking to the walls and sliding on the floor? The imagination of the films was great. But also, for me, there was an escape from the reality that was around me. New York was a totally different place. The city has been really upgraded. I use that word ‘upgraded.’ It’s a really beautiful city, but I grew up in the Taxi Driver city,” RZA laughed. “To escape that, to go into a movie theater and see that light flickering, and not just go in and see black exploitation, but to go back 500 years or 1000 years and watch martial arts and watch men with no guns, use their bare hands to fight each other, to have that chivalry?”

“There’s other Shaw Brothers films, like Executioners from Shaolin, where you see generations of art taught from father to son and patriotism. 36 Chambers of Shaolin, one of my favorite films of all, where we learn that government oppression existed other places in the world. Watching these kinds of films, I’m seeing that this problem of oppression is everywhere in the world. Even in this film [Five Deadly Venoms], we’re watching the police, corrupt, getting paid, and letting the bad guys get away with things. It’s funny, in its own small way, it still resonates in today’s society, in one way or another. For me, it was big escapism and it gave me camaraderie with other people around the world.”

El Rey Network, started in part by filmmaker and cult cinema aficionado Robert Rodriguez, feels the same and is devoting a huge chunk of their programming to keep the Shaw Brothers alive on our TV sets in 2015. They’ve got over 255 titles from the Shaw library that they’re showcasing on the channel over the next five years, effectively turning America’s living rooms into smaller, cleaner grindhouses. 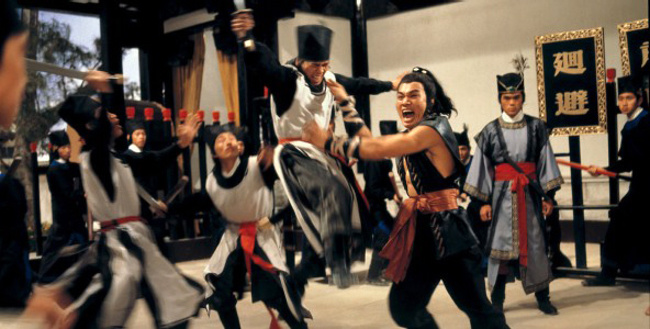 It didn’t take much prodding to get RZA to open up about the sleaziest glory days of New York’s all-night theaters. “I practically lived in those [42nd Street] theaters, from the age of 12, 13, 14, I cut school and was hanging out in movie theaters. And what was cool about it, you had all these martial arts double-features, triple-features, but two doors down you got all the porno triple-features. In those days, I promise you, you could walk down 42nd Street and if you looked to your left, there’d be an open door, woman on the steps, exposed. You could get a nice peek. Imagine being a kid? WOW! It was a crazy place but so exciting.”

He stops to consider that real-world Pleasure Island in the context of his own childhood development, “For me, these early experiences—martial arts films, R-rated films in particular, intoxications and stimulations—it probably accelerated my mind.”

At fourteen, RZA moved to Staten Island and met the friends who would eventually become his band mates, and that diet of martial arts movies was directly responsible for the formation of the band. “There was another film that the Shaw Brothers released called The Eight Diagram Pole Fighter, and it was that film that really inspired the brotherhood of Wu-Tang. There was no more going to 42nd Street; we would cut school and go to RZA’s house, all right? I had all the VHS tapes of the kung fu films and that one was probably played the most. At the time, we’d be like ‘I’m the fifth brother! I’m the second brother! I’m the third brother! You’re the abbot!’ At the age of 18, I was like “Yo, we’re going to form the Wu-Tang Clan.” I started telling everybody I was part of the Wu-Tang Clan.”

The man can talk movies. He let us know he had just finished going through Woody Allen’s entire catalog and had moved on to Robert Altman. In the brief post-film Q-and-A, he recommended films in seemingly every sentence he uttered. Wu Tang Swordsman, Mystery of Chessboxing, One-Armed Swordsman, Avenging Eagle, Come Drink With Me, Lady Assassin, the Brave Archer trilogy, Dirty Ho, Opium and the Kung Fu Master, Chinatown Kid, Killer Constable, The Savage Five and more recent actioners like True Legend, Ip Man, The Raid, and The Raid 2 all got name-checked. Your streaming queue just got 99% more punchy and kicky. Thank RZA.

“They call us cinephiles, right? And it’s our job to study film,” RZA explained. “The Shaw Brothers have a catalog of study that can help you with many art forms. They helped me as a producer. You heard many of the music stabs from that film [Five Deadly Venoms] in my music. But it also can help you as a writer, as a cinematographer. There’s a lot of great film libraries out there and, to me, Shaw Brothers’ is one of the best.”