By Nick "The Tooth" Gullo and Michael Hresko 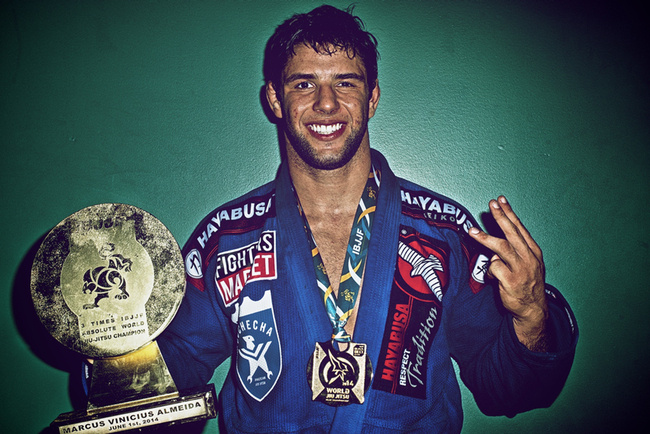 Photos by Nick "The Tooth" Gullo and Michael Hresko

In Brazilian jiu jitsu, like tennis, hundreds of top athletes compete for gold in large open-entry tournaments. What makes both sports so amazing is that the same elite stars continually rise to the top. Roger Feder or Rafael Nadal might start in the same pool as a hundred other players, but fans will most likely see at least one of them in the final. The same goes for The Gentle Art: every year at the Mundials, its most prestigious event, grappling's most-feared fighters stand atop the podium.

It was an exciting and emotional 4 days, and just before the curtains closed on jiu jitsu's greatest tournament last night, the champions were crowned.

Bruno Malfacine defeated João Miyao by referee’s decision after an 8-8 tie. In their maiden year as black belts, the Miyao brothers steamrolled the competition and established themselves as two of the greatest in their weight classes. Unfortunately, they both met legends in the finals, and both lost by razor-close decisions. 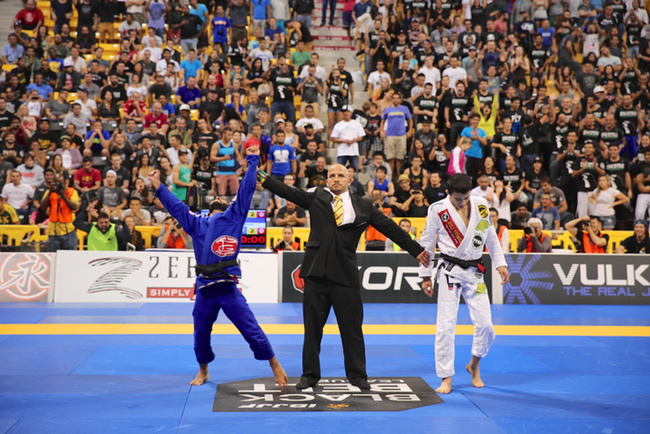 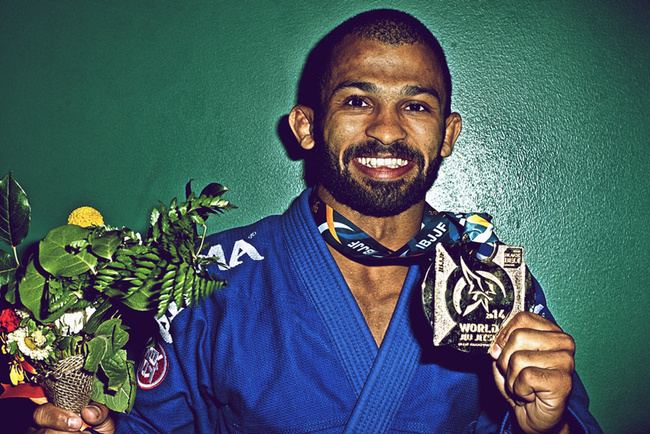 Gui Mendes defeated Paulo Miyao 2-1 on advantages after a 4-4 tie on points. It was the closest match of the tournament. In 50/50 guard for much of the match, they swept back and forth while Paulo wrenched a toehold, trying to force a tap, while Gui attacked a straight footlock. The arena erupted in equal parts applause and boos at the decision. Paulo broke down and cried. Gui celebrated his fourth World title. When the two fighters made it to the podium, Paulo (who literally sleeps on the mats of the academy where he trains) was so emotional he could barely stand. In support, the entire audience chanted, "Paulo! Paulo! Paulo! Paulo!" 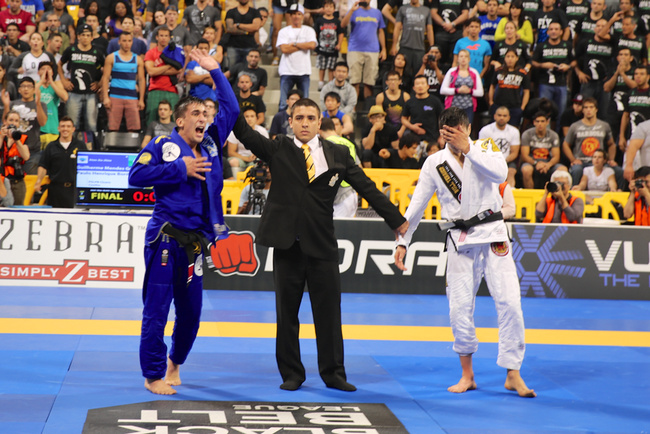 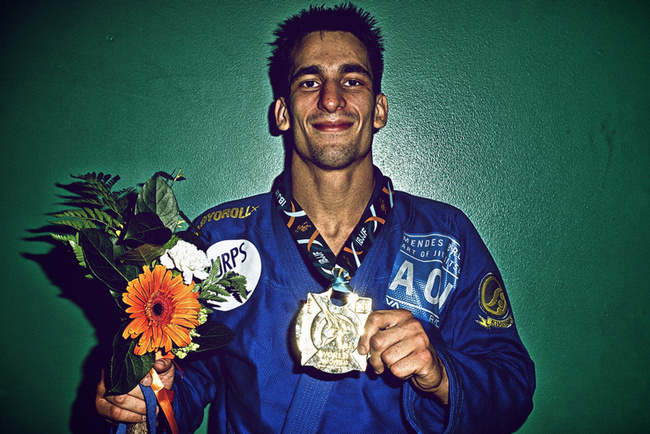 Rafael Mendes defeated Rubens Charles Maciel “Cobrinha” 10-8. This was a close fight, but the score doesn’t reflect Rafa nearly taking Cobrinha’s back—rolling to the edge of the mat, trying to secure the second hook, Rafa spun and mounted Cobrinha, but the judge ruled out of bounds and started them standing. 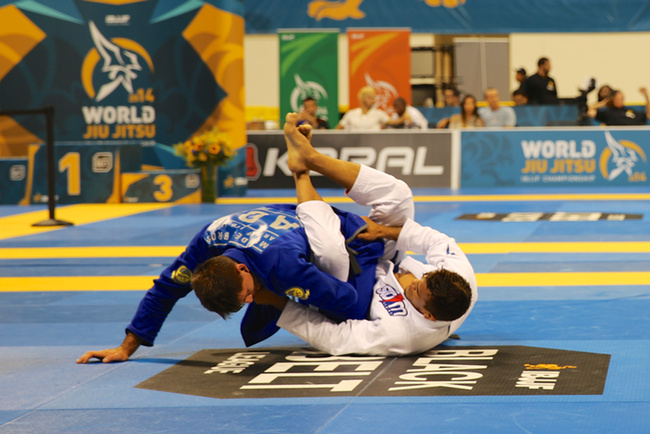 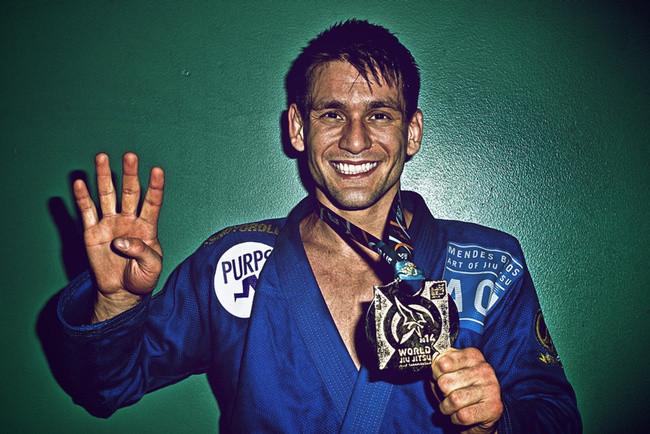 Lucas Lepri defeated JT Torres 12-0 in the final. JT had a lot of difficult, tiresome matches before the final, and had lost to Lucas before, but he was all smiles before and after. He will be back next year. 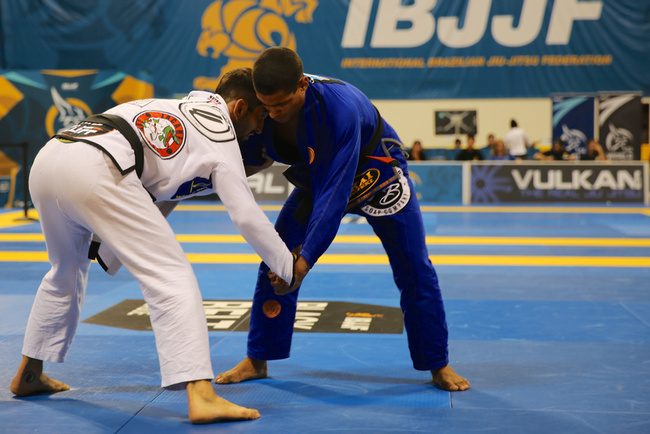 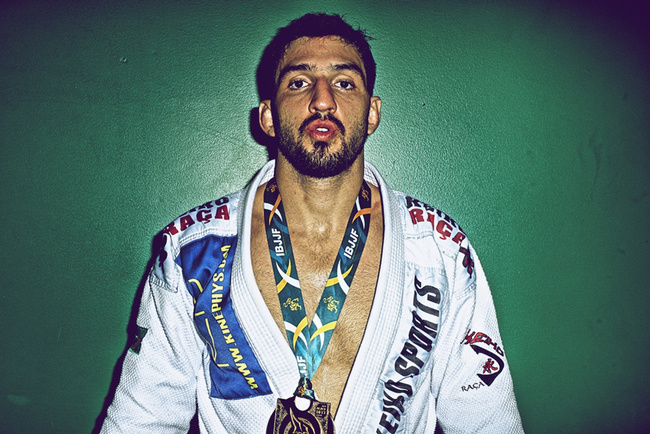 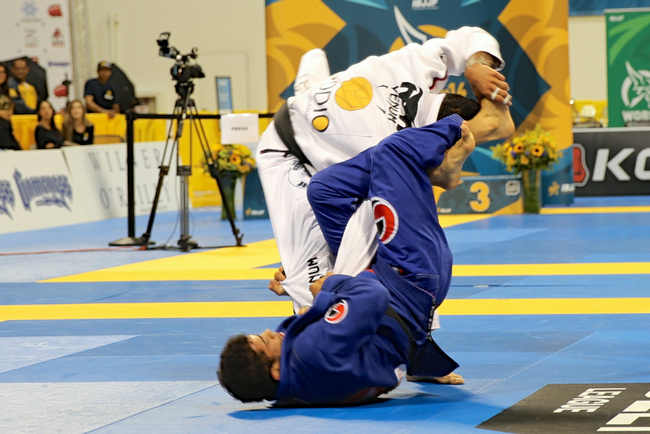 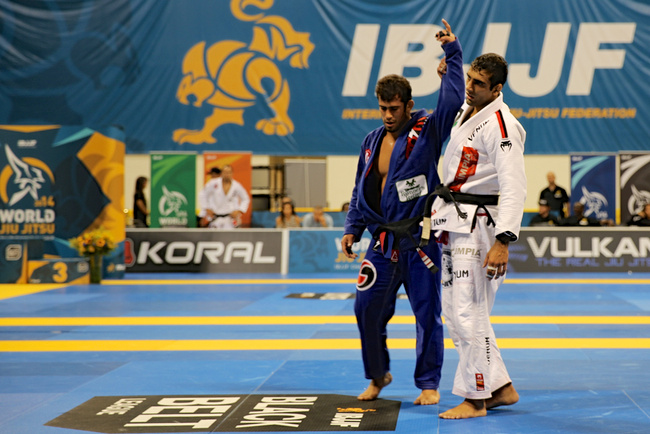 Braulio Estima wins via "close-out" with teammate Romulo Barral. It's customary in Brazilian jiu jitsu competitions to opt not to fight other teammates. When they do meet, it's usually in the final match, where the less senior fighter chooses to take second place. 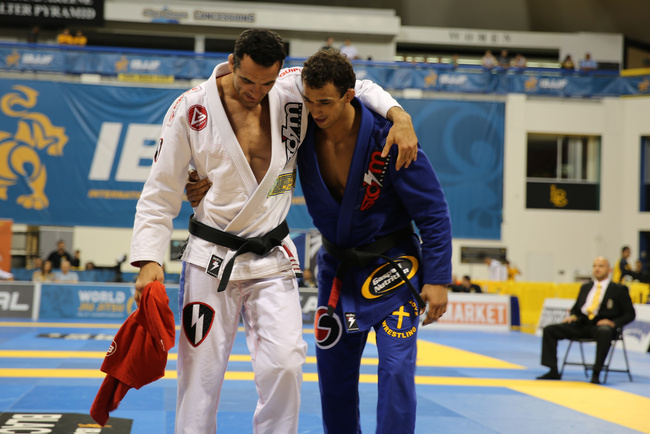 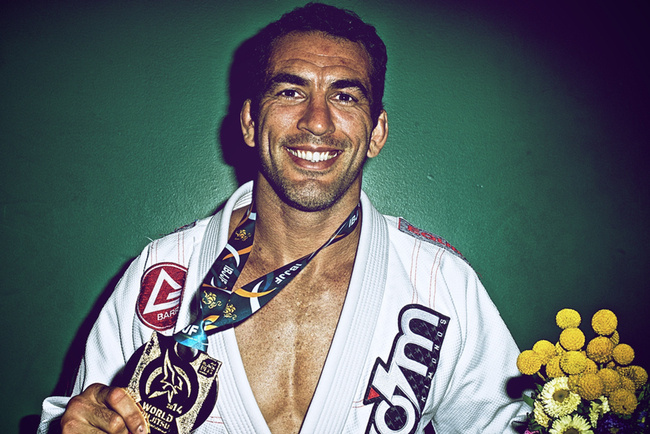 Felipe Preguiça Pena defeated Andre Galvao 6-4 in the final. A back and forth battle, but Pena has been on a tear this year, and he used that momentum to secure the win. 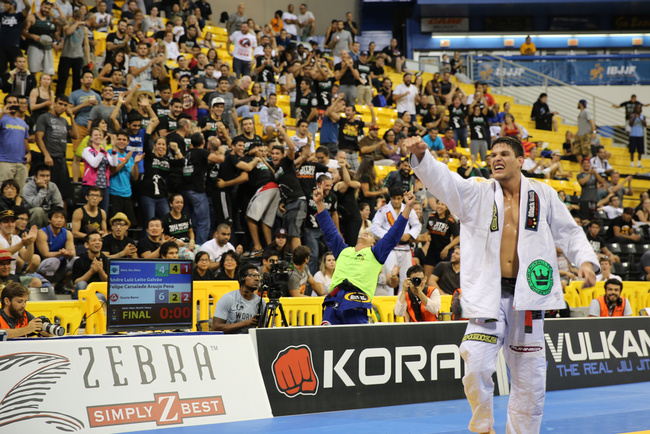 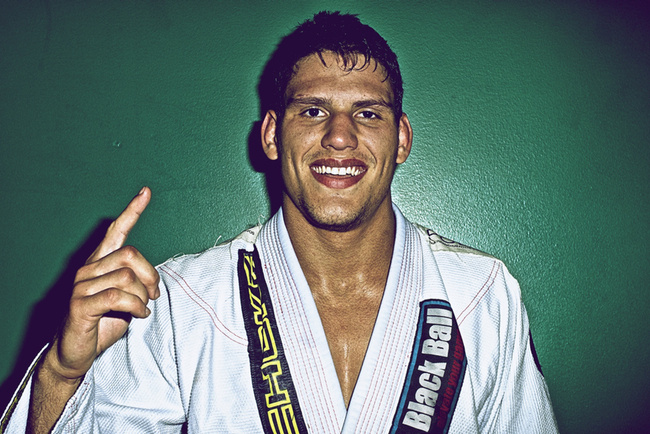 Rodolfo Vieira defeated Bernardo Faria via armlock from the mount. Faria had fought incredibly all tournament, and was only one match away from pulling it off. 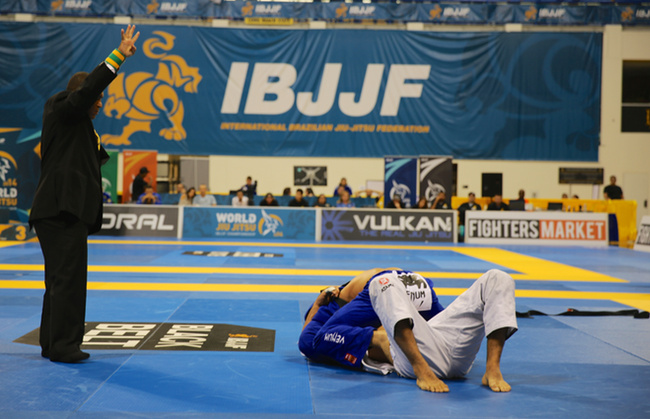 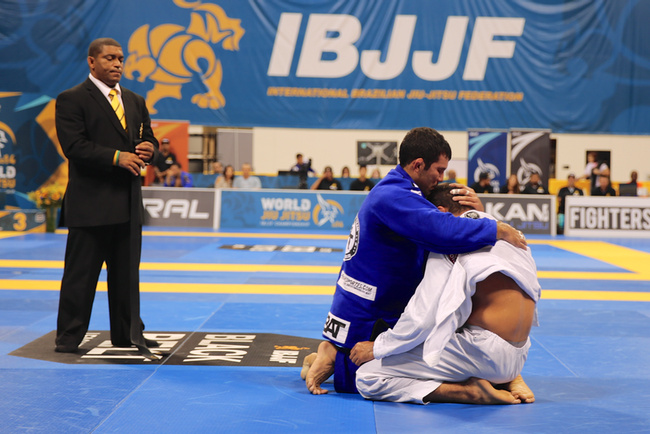 Marcus Almeida “Buchecha” defeated Alex Trans via choke from the back. Trans passed his guard early in the match, surpising everyone, including Buchecha himself. 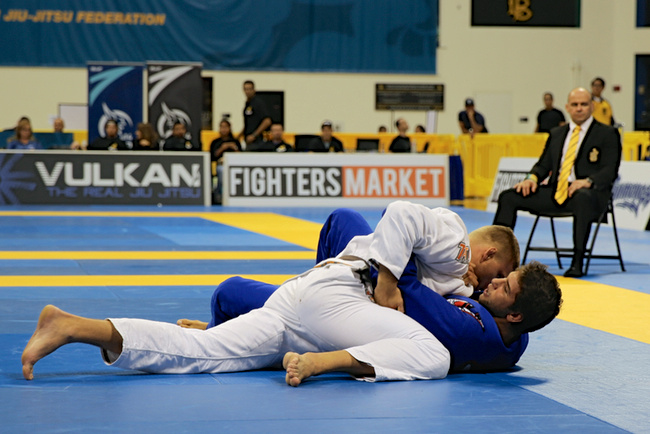 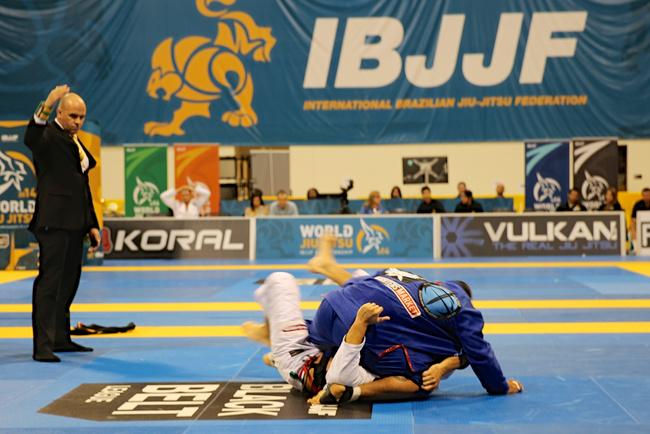 Buchecha defeated Rodolfo Vieira 2-0. Making history as the first to win the Absolute division three times in a row. 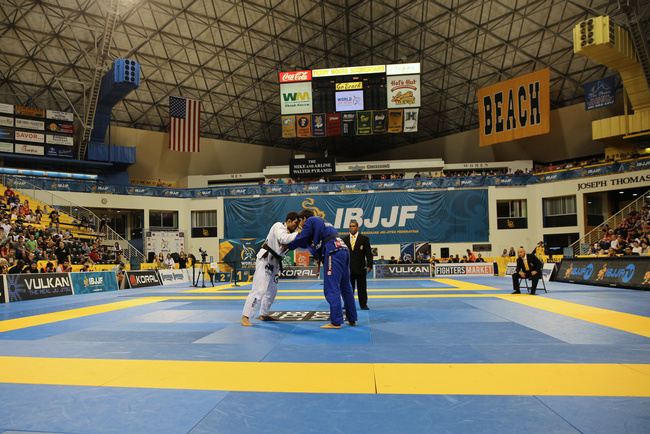 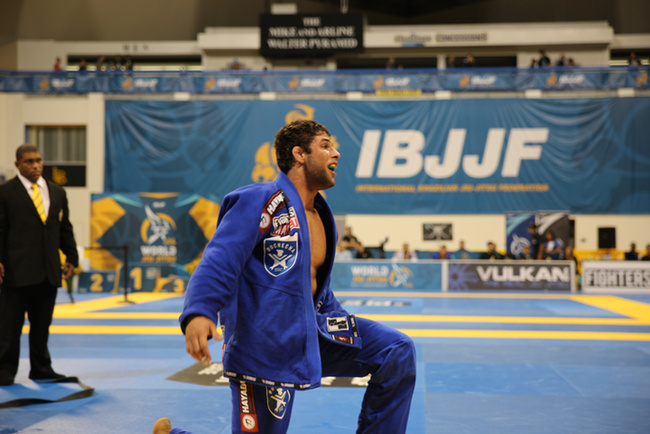 [Ed. note: If heel hooks continue to be illegal techniques, than away with the 50/50. Too much time is being spent in this position. A lot of incredible progression of the sport has derived from this developing this type of guard, but it continues to be used as a stall tactic. Heel hooks are very dangerous, but provide a neccessary risk to the reward. It's time for a change. "Save jiu jitsu!"]