Return to the Kumite 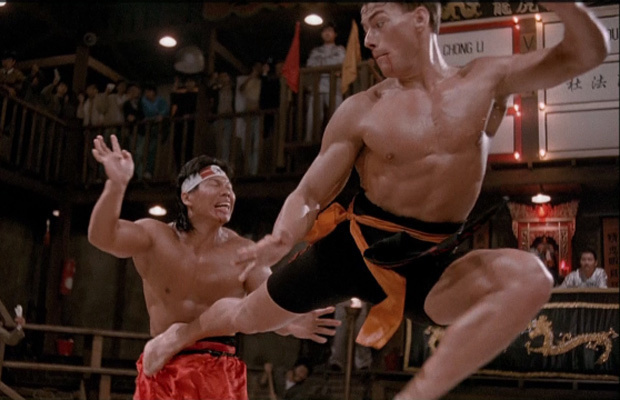 Fifteen years ago, a charismatic Belgian kickboxer-turned actor walked out of a fictional no-holds-barred underground fighting ring in Hong Kong and into Hollywood lore. Jean-Claude Van Damme was completely unknown when he signed on to star in Bloodsport, but soon he was famous for being one of the worst actors to ever appear on a movie screen. Which was appropriate, considering the character he was playing was based on one of the worst liars in the history of martial arts.

Frank Dux’s tales about his victory at the bloody and mysterious kumite tournament may have become legend in the world of fighting, but they were all nonsense, bunk, and bluster--as were his apprenticeship at the feet of a Japanese ninja master no one in the Japanese ninja community had ever heard of; his Medal of Honor for taking part in covert military operations in Southeast Asia; and the boatload of orphans he saved from Philippino pirates. Dux faked all of it to sell himself and his martial arts schools in Los Angeles. And then van Damme faked being Dux.

Well, yesterday, in a move that will surprise exactly no one familiar with modern-day Hollywood, Relativity Media announced that they will be remaking Bloodpsort. This time, rather than fighting in Hong Kong, the Frank Dux character will be an American military veteran who finds himself in an underground Vale Tudo (anything goes) tournament in Brazil, which, we're guessing, he wins.

It’s a strange move for a movie studio. When Bloodsport first came out in 1988, no one knew anything about no-holds-barred fighting. The first UFC event was still five years away, and as far as most people were concerned, the idea that a bare-knuckle combat tournament would take place in a dimly lit, smoke-filled basement and involve repeated leaping kicks punctuated by extended demonstrations of muscle flexing, temporary fits of blindness, cryptic headbands, and the very real possibility of death, seemed reasonable enough. If people were somewhere fighting to the death, that’s probably how they were doing it. And that’s why Bloodsport—a movie that could not be more poorly written, acted or directed—did so well: It claimed to tell the story of a terrifying thing no one had ever actually witnessed, but that everyone, no matter what they might have said, was curious about.

Nowadays, though, sport fighting is simply a part of the culture, as unsurprising as basketball or cooking shows. Which means two things: 1) The fear and mystery motivating our fascination with a movie like Bloodsport is gone, replaced by the simultaneously more fascinating and more pedestrian reality of mixed martial arts, which is a thing of beauty but no longer a source of deviant, fear-inducing curiosity; and 2) our experience with mixed martial arts (whether that of the active fan or the indifferent channel surfer) means that we know what a real fight looks like. Twenty years after Royce Gracie beat up men three times his size while lying on his back, we know that true fighting is a close-in, hard-nosed, dirty business that rarely involves secret death punches or (outside of an Anthony Pettis fight) people leaping anywhere off of anything for any reason.

Bullshit though they may be, Frank Dux’s stories, and the movie based on them, became an inspiration for a generation of kids who wanted to believe the kumite was real and that one day they would have a chance to fight in it. Fifteen years later a lot of them are, but now the kumite is just as secretive, shadowy, and deadly as a sport broadcast on Fox and sponsored by Budweiser can hope to be. The mystery of fighting has been replaced by the sport of fighting, and it’s hard to imagine some 10-year-old finding inspiration in a world of fantasy when the reality—a thousand times better--is just a mouse click away.