Rick Story: King of the Spoilers 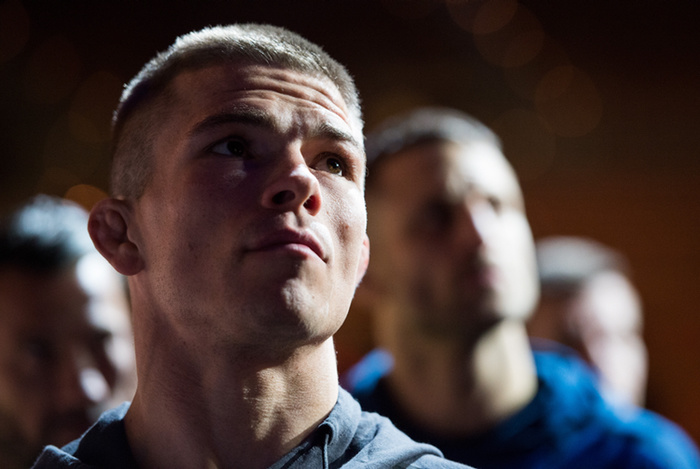 There is a lot happening in the UFC's welterweight division right now. A lot to talk about. Tyron Woodley defied the odds to become the champion with one punch. Stephen Thompson is the most obvious challenger, but Woodley wants a money fight with Nick Diaz. Georges St-Pierre is making his usual rumblings about a comeback, and Demian Maia is booked to battle the man many fans think should already own the welterweight title in Carlos Condit. But in all of that hubbub, a dark horse has crept back into the UFC's top ten after an almost two year absence. Rick Story might not like being ignored, but he probably doesn't mind being underestimated. He has, after all, spent his entire UFC career taking on hot prospects and showing them how much more there is to the fight game than having some nice techniques and the athleticism to go with it.

There is a term for the kind of fighter that Story is. The kind of fighter who takes what seems like a top notch opponent and whether he wins or loses makes that fighter look very ordinary. In boxing that kind of fighter is called a 'spoiler' and as a promoter you don't want them going anywhere near your meal ticket. Rick Story doesn't have a world title to his name and he has had a checkered record and difficulties with injuries over the last five years, but if there's one thing he can do it is make 'the next big thing' look like a bag of hot air. Story handed Johny Hendricks his first loss, he upset Thiago Alves when Alves had only struggled with Georges St-Pierre and Jon Fitch, and in 2014 Story took on the flavor of the moment, Gunnar Nelson and put him through the meat grinder. This weekend at UFC 202, Story faces a very stern test indeed in the now welterweight Donald Cerrone, but being the underdog is not unusual for Story and any time he is matched with an ascending star there is a great chance of another classic spoiling.

The basic Rick Story game has always been swarming to the fence, swinging while there for a bit, and then ducking in on the opponents' hips or into a clinch when they start throwing back. The secret is pace and discipline, Story rinses and repeats this process over and over again and it wilts men quickly. Against Hendricks and Alves this was enough to get the victory. Alves especially struggled with the ticking clock that the smothering wrestler put on the fight. The longer a striker gets trapped in the clinch, the more he has to make his strikes count in between the clinches, the wilder he gets and then the more he opens himself up for further clinches.

Lovely use of the body kick to halt Alves' circling and allow Story to press him to the fence.

What separates Story from other wall 'n' stallers is his affinity for body shots. Earlier in his career this was largely just to change targets during flurries along the fence.

But as his career progressed and he gained a reputation for them, Story began to find body shots on the counter and to set them up more thoughtfully along the fence. Story has never been a difficult man to hit—standing almost square and barely moving his head at all—but having a head like a cinder block allows Story to trade comfortably, except where his opponent is swinging at Story's head, Story is making the investment in the body work.

Story makes excellent use of a double up left hand. As a very square-on southpaw this serves him well. Chris Weidman makes good use of the double right straight against southpaws to cover ground and cut the cage, but Story likes to throw a looping left hand and then cut off a short left straight immediately afterwards which often catches his man by surprise. Manny Pacquiao also doubles up on his left hand in this way, with the second, less severe punch often sneaking through cleanly.

The finest performance of Story's career was arguably his battering of Gunnar Nelson in one of the best fights of 2014. This came after working at the MMA Lab with John Crouch and Benson Henderson who could be seen between rounds keeping their man on task. Story was a stylistically tricky match up for Nelson from the moment the bout was signed but by staying disciplined and performing to a fairly simple but perfect gameplan, Story became a nasty bump in the road for the Nelson bandwagon. Story's commitment to low kicking early and often quickly took its toll on the footwork of the elusive distance fighter.

But whenever Nelson did get in with one of his long right straights, he found himself eating three body shots before he could get out again.

Nelson's game has always been punch-and-clutch on the feet. One blow at a time, straight into the clinch, then into the takedown and from there Nelson uses his excellent grappling skills. But each time the two got into the clinch Story would flurry with body shots. Each time Nelson stood at range, Story would pound away at his legs. Each time Nelson tried to take Story down he either couldn't get the great wrestler down, or he couldn't keep him down.

Uppercuts on breaking the clinch are another Story trademark. A neat trick to remember as many fighters drop their heads when they push off to break or keep their head low as they attempt to push back in.

From looking like the much slower man in the first round, Story had taken control by the third. Prolonged engagements on the feet favored Story and Nelson had no way to avoid them if he couldn't get Story on the mat and keep him there. The Nelson karate reverse punches came slower and the small window where Nelson didn't recover his right hand to a guard became pronounced. Left hooks started catching him and in the fourth round Nelson was decked by one of these.

It seemed as though Story had found his home. He is a man made for five round fights. In June of 2015 Story was booked to fight Erick Silva—another hot prospect with a habit for folding under pressure—but that bout was postponed until August, whereupon Rick Story's career hit the skids outside of the cage. Injuries sidelined Story for the entirety of 2015 and he finally returned three months ago at UFC Fight Night: Almeida vs Garbrandt. In his return Story met the Belgian low kick savant, Tarec Saffiedine. A number of changes were visible in Story.

Firstly, Story was turning his hips much more effectively into his punches and especially into his kicks. Story has always been something of a wooden arm puncher. He hits hard, but that is more strength than a transfer of weight. Against Saffiedine, Story's striking looked like a work in progress but much more dynamic.

More importantly, Story was manufacturing more opportunities to open up with body shots along the fence. In the same way that Nick Diaz did so effectively, Story would get his head underneath his opponent's and concede the double collar tie, but maintain the iron rod up his back and pound away at Saffiedine's exposed midsection. Story found opportunities to dig in blows like this rather than just flurry up and down his opponent on numerous occasions through the bout.

At UFC 202 Story comes in as the underdog again, this time against Donald Cerrone. Many MMA fans want dearly to see Cerrone finally win a UFC title and his work in the welterweight division thus far has been tremendous, but we could be on the brink of another great Story spoiling. Cerrone's trouble has always been with pressure and with body work especially. Rafael dos Anjos buckled Cerrone under body shots, Nate Diaz also drained Cerrone with tight work in the clinch along the fence in the opening round. Both of those are, of course, Story trademarks. But Cerrone's intercepting knees and elbows could prove trouble for Story who has never been one to make himself a difficult target.  Indeed, Cerrone's usually wide, loopy hands have looked crisper, more economical and heavier at welterweight, and while we haven't seen it tested a Cerrone with more mass around his middle might well have banished his troubles with taking the body work.

One man gets to move forwards, but one man will trip and lose his momentum once again. Will it be the Cowboy: the lightweight division's great underachiever, or will it be the King of the Spoilers?

Diaz versus Cerrone: The Habits and Growth of Two Fighters, Five Years On