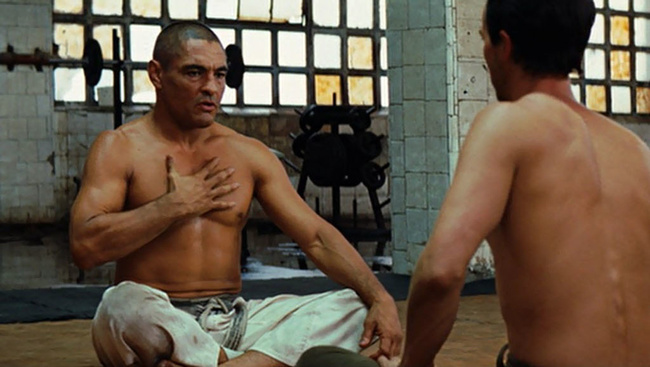 Rickson Gracie's scene with Edward Norton in The Incredible Hulk.

Yoga is an increasingly popular form of Indian exercise. In the world of jiu jitsu, yoga and its associated breathing techniques gained the notice of many, thanks to the example of Rickson Gracie, a Brazilian jiu jitsu master, who is most known for his legendary street fights and two consecutive Japan Vale Tudo tournament championships. Another devotee of this Indian exercise was Aleister Crowley, the English mountaineer, poet, drug fiend and ceremonial magician, notoriously known by many as “the Beast 666.” At first glance, Rickson Gracie and Aleister Crowley have nothing in common. One is a martial arts master and prize fighter who adheres to a strict diet that forbids drugs and alcohol. The other was a portly and enthusiastic conjurer with a reputation for libertinism.

Nevertheless both are partially responsible for booms in their respective fields. Rickson Gracie is part catalyst for the jiu jitsu explosions which have enveloped the martial arts world, training Royce Gracie for his UFC victories and igniting the fire in Japan, through parallel accomplishments in “no rules” fighting. Aleister Crowley is essentially the Royce Gracie of the occult. Crowley is arguably responsible for almost single handedly reviving the Western Esoteric tradition, inspiring the personas and creating the source material used by the later founders of Wicca, Scientology and some forms Satanism. Both men are influential and both men are yogis.

Rickson Gracie is the son of Hélio Gracie, who is described, by some, as the Einstein of Brazilian jiu jitsu. Hélio was a physically weak and frail man, who according to Kron Gracie could not even do one pull-up at the height of his physical prowess. Rickson, on the other hand, is a natural born athlete. His natural athleticism combined with the refined technique of his father, made him, according to Royce Gracie, Dave Camarillo and Paulo Filho, the best jiu jitsu player of the Gracie clan. An aspect of Rickson’s unique physical training is yoga, or simply “breathing.” Rickson Gracie learned these techniques from Orlando Cani a fellow martial artist, yogi and personal trainer. Orlando believed that the breathing techniques of yoga should be performed with gymnastic movements. By combining gymnastic exercise with yoga, Rickson Gracie was able to train his body in a way that converges with the physical demands of jiu jitsu.

The theory, as described by Kron Gracie on the Joe Rogan podcast, is that animals have better stamina and are more in tune with their bodies than human beings; that in order for humans to maximize physical performance, humans must become more animal like in their movements. Part of this superior conditioning and synchronicity with nature comes from the way animals breath. The lungs are likened unto bottles, skinny on top and wide at the bottom. According to Kron, when we breathe by focusing on inhaling, we don’t fill our lungs properly. Mammalian predators, on the other hand, are said to breathe by simply exhaling. Rickson Gracie’s breathing technique is essentially exhaling so that the lungs become empty and then allowing the lungs to fill up automatically and effortlessly. As opposed to gasping for air, one is exhaling continuously. This is described as a more efficient way of oxygenating blood and as breathing through the diaphragm.  The diaphragm is seen like any other muscle in that it can be trained for maximum utility through exercise. At the most advanced level, these diaphragm exercises take the form of abdominal contortions.

The meditative and yogic practices of Rickson and Kron Gracie also have a mystical dimension to them. Rickson Gracie described one particular session with Orlando Cani, where he was left completely alone. For the first time, he was able to do Orlando’s exercises by himself; during this session, he was able to achieve “empty mind”, losing track of more than one hour of time. Rickson says that he has done transcendental meditation and more conventional forms of yoga but nothing ever helped him enter a state of deep meditation the way Orlando Cani’s techniques did.

Kron mentioned having experiences with “knarly trances” where he felt that he was connected with “whatever is above us.” Kron uses yoga for improving his jiu jitsu and in becoming a better person, to maximize his human potential. He has described his father as a spiritual man, claiming that when people are connected with “whatever is above us,” good, sometimes inexplicable, things happen. This is similar to an attitude shared by his grandfather Hélio Gracie. In an interview for Gracie Magazine, Hélio said: “My brother [Carlos Gracie] used to say the fellow only stops returning to Earth when he mingles with the Whole.” For Rickson Gracie, jiu jitsu is first and foremost a self-defense art but he and Kron also describe it in ways that parallel their description of yoga. In one documentary, Kron says that jiu jitsu “puts me in touch with myself and it kind of gives me a real understanding of what life is about.” When describing jiu jitsu, in a different documentary, Rickson says “The beauty of the art is to give you an evolutionary process in the physical, in the mental and also in the spiritual level.” Rickson’s practice of yoga and jiu jitsu have the same goal of Aleister Crowley’s yoga and ceremonial “magick” but both use completely different methods to get achieve that goal.

Aleister Crowley was known in his day as the “world’s wickedest man” and gained a posthumous resurgence in notoriety, when he appeared on the cover of the Beatle’s Sergeant Pepper’s Lonely Heart Club Band. A ceremonial magician, Crowley first learned his art while a member of a secret magical society, the Hermetic Order of the Golden Dawn. It was there that Crowley was trained in theurgy by Allan Bennet. Eventually, Allan Bennet moved to Burma and became one of the first Westerners to be ordained a monk, in Theravada Buddhism. Crowley would eventually meet up with Bennet and the two spent several months in Sri Lanka, training in yoga under a Shaivist guru, Ponnambalam  Ramanatham, author of An Eastern Exposition of the Gospel of Jesus According to St. John. It was during this time in Asia that Crowley also learned the fundamentals of Buddhist meditation, presumably from Bennet.

In Liber E vel Exercitiorum, sub figura IX, Crowley details the yoga techniques he learned in Asia. His basic system is divided into Asana, Pranayama and Dharana. For the purposes of this article, we will only discuss the first two. For Crowley, the basic practice of Asana, yoga body postures, consists of holding these positions, while remaining perfectly still for extended periods of time. Crowley outlines four postures. The first position, “The God,” is done sitting on a chair, back straight, feet flatly on the floor, with hands on the knees and the eyes closed. The second position is called “The Dragon,” with knees on the floor, the buttocks resting on the heels, the back straight, toes pointed straight back, hands on lap with eyes closed. The third position is called “The Ibis” and is performed standing on one leg, with the hand from the standing leg’s side grabbing the ankle of the opposite leg from behind, with the index finger, of the remaining free hand, touching the lips. Crowley’s final Asana position is “The Thunderbolt.” This position is done with the left knee on the ground, with the ball of the left foot on the ground also, the buttocks resting on the left heel, the right foot is on the ball of the foot, with the right heel touching the groin area. The arms are stretched out and the yogi is supposed to stay in these positions for as long as possible. Crowley also suggests that all meditative practices and their results should be recorded in a “magical diary.” According to Liber E, students of this system can apply for examination of their abilities, once they can hold these positions with a water filled saucer sitting on their head and not spilling a drop.

Crowley’s pranayama technique consists of sitting, in one’s choice of position, and placing the middle and pointer fingers on the forehead. If you are using the right hand, the thumb can be used to block the right nostril and ring finger can be used to block the left nostril. The most basic pranayama is performed by closing only one nostril, while slowly exhaling for 20 seconds then once the lungs are empty, slowly inhaling for 10 seconds. The process is repeated through the other nostril, exhaling for 20 seconds then inhaling for 10 seconds, always alternating nostrils. This process is supposed to be repeated for an hour. As the yogi advances, various breathing intervals can be used; 40 and 20, 30 and 15 etc. As with Asana, Crowley advises the student to make a meticulous journal of any effects that may be felt or experienced. 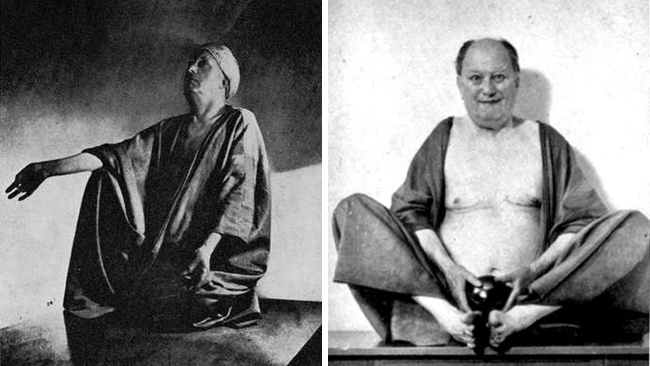 Crowley’s training in Asia resulted in him entering a deep state of meditation known as dhyana, which he recorded on October 2nd, 1901. According to occult historian, Dr. Gordan Djurdjevic, the hermetic philosophy and ceremonial magic Crowley learned in the Golden Dawn, made almost no use of Eastern meditative practices. The experience in Burma and Sri Lanka forever changed the way Crowley approached the performance of ceremonial magic and the way he interpreted it’s effects. According to Djurdjevic, in The Great Beast as Tantric Hero, Crowley came to treat ceremonial magic as a form of yoga. In “Postcards to Probationers,” Crowley defined Yoga as “the art of uniting the mind to a single idea.” Interestingly, he also defined ceremonial magic as “the art of uniting the mind to a single idea.” For Crowley, meditation and ceremonial magic were two sides of the same coin. For Crowley, the goal was the knowledge and conversation with the Holy Guardian Angel. Crowley defined the Holy Guardian Angel many different ways. On one occasion he described it as being identical to the “Genius’ of Socrates,” a certain “divine something” or “voice” that the Greek sage said guided him through life. The Holy Guardian Angel is supposed to reveal one’s True Will, a term Crowley used for one’s inherent nature, the unique path one was meant to follow in life. Like his Buddhist friend, Allan Bennet, Crowley’s mysticism was a personal introspection rather than an attempt to unite with metaphysical externalities.

When we compare and contrast the yoga practices of Rickson Gracie and Aleister Crowley, we can see similarities and disconnects. Jiu jitsu is to Rickson Gracie, what magick is to Aleister Crowley. Using Crowley’s definitions, the aim of both arts is “causing Change to occur in conformity with Will.” Both jiu jitsu and magick require “the application of the proper kind and degree of Force in the proper manner, through the proper medium to the proper object.” Granted, jiu jitsu and ceremonial magick are two different things; one is a system of self-defense and the other mysticism. Nevertheless, both Rickson Gracie and Aleister Crowley share the commonality of viewing their disciplines as being complimented by and improved through yoga. When we look at the statements of Rickson and Kron, the goal seems to be maximizing human potential; to them, yoga and jiu jitsu are two sides of the same coin. However, as we have seen, Crowley and Rickson’s approaches to yoga are completely different.

Conor McGregor, Aleister Crowley and the Power of Belief

The Samurai, Meditation, and Smart Phones