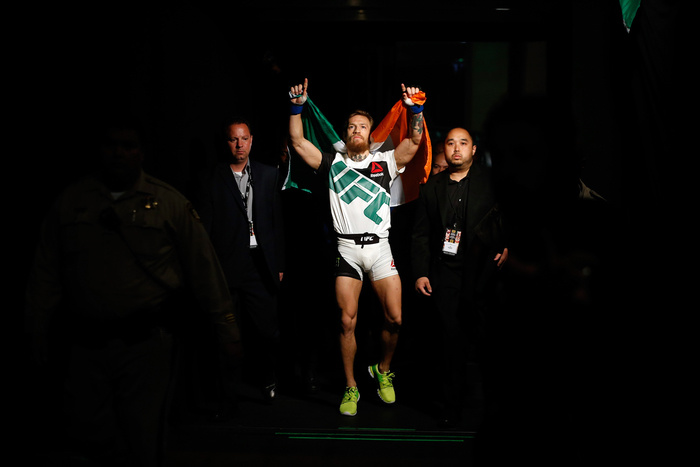 Fighters change from week-to-week. This is based on their attempts to improve their areas of weakness, the input of their coaches, and their whims. One of the factors which makes fighting so tense is that you are only seeing a snapshot of the competitors when they step into the ring together. Two years earlier or two years later and the match up might be considerably different.

In Ringcraft: A Study in Conor McGregor we examine the featherweight title challenger with an eye for how his style has changed since his success in two divisions in Cage Warriors.

Anyone can spot the simple trend in McGregor, he's less evasive, more aggressive, and utilizing kicks far more effectively and frequently in his recent bouts. The specific ins and outs are more subtle—the front snap kick, the lead leg side kick and jumping switch kick pairing, the turning kicks to eliminate the classic southpaw blind spot if the opponent circles past his lead hand. And that is what I enjoy most about McGregor, he is still changing and evolving this far into his career and his style grows fight by fight.

That being said, what we see in any fighter is change not exclusively improvement. Just as with biological evolution, this is not a climb towards perfection but rather adaptation to circumstance. Any time spent training or utilizing one strategy or area of the game means less time invested in another.  Just think of any time you have said something like “I wish [accomplished wrestler who now believes he's a boxer] would get back to his wrestling” and you'll understand what I'm getting at.

In McGregor's case he developed tremendous ability on the lead as he fell in love with the kicking game. Counter kicking is a legitimate tactic, but relies on tremendous timing. In many cases it lacks the power of forward moving kicking, and because heaving the legs up is slower than punching and one must be on one leg to actually throw the strike kicking better lends itself to leading.

But more than that, McGregor's striking in his late Cage Warriors career and through his first UFC bout was more about drawing the lead from his opponent. Arms out wide, inviting a punch. That doesn't work forever though, even Anderson Silva found that out. Where McGregor used to move forward, arms wide, ready to spring back and counter, he now presses forward to kick—particularly along the fence—but constantly looking to throw his feet into his opponent's midsection, he seems less ready to retreat on the hair trigger.

McGregor is getting hit flush more as a result, anyone could see that against Chad Mendes, but equally the tremendous work rate he set with his long kicks to the body between his flashing left straights won him that bout. The pursuit of perfection is important to the mindset of the fighter and the trainer, but in any change of focus there are going to be pros and cons.

To see the reverse of this change in priorities one can watch Anderson Silva's career from start to finish. In Shooto and PRIDE, Silva attempted to fight in the same style as Wanderlei Silva and Pele—walk forward, swing hard, fight off the takedown and hold closed guard until you are stood up if you fail. Moving forward and attacking didn't suit Silva's lanky build and lack of wrestling chops. Kicking often got his leg caught and saw him taken down, and punching left a huge hole to duck through onto his hips.

Silva improved from fight to fight, but his last all out aggressive performance was probably against Jeremy Horn, wherein Silva was doubling up on round kicks and putting together combinations. When Silva got to the UFC, he had realized the value of making opponents come to him. He didn't need to expose himself when he could have so much success just waiting. By midway through his title reign, Silva would only very occasionally lead, normally with the intention of drawing a response or some kind of activity from the opponents who had long since realized he was a hundred percent better on the counter.

Two great discoveries which inevitably change a fighter's priorities are those of having knockout punch and of having a sturdy chin. They say that finding out he has an exceptional chin is the worst thing that can happen to a fighter, because he starts to consider it a fighting quality rather than a lucky break when he makes a mistake.

The discovery of a knockout punch can be just as bad for a fighter's craft. In an interview back when he was the school boys champion of England, Naseem Hamed admitted that he didn't have a lot of punch, but he could move better than most of the boys he fought. Of course, Hamed went on to discover that not only did he have a bit of pop, he was one of the hardest hitters his weightclass had ever seen. It worked out well, for a while, as his Brendan Ingle taught five stances method shone through, but soon the varied jabs, draws, and counters dropped away and he was just leaping in with one lead hook at a time.  The wild, swinging Hamed of his post-Ingle career was far removed from the unorthodox master boxer who took the title from Steve Robinson.

And the examples of fighters finding out they can punch and abandoning the sound science which allowed them to actually land said punches are myriad. Even Sugar Ray Robinson realized that when he was just trying to knock opponents out, he'd do awfully, and when he got back to out-boxing them, they started falling down all by themselves.

But Anderson Silva's flat out refusal to lead, and Naseem Hamed's abandoning of his entire boxing game are extreme examples. Most examples of fighters changing very obviously over time have as many upsides as downsides. Many developments came about through necessity and proved to be just what the doctor ordered.

George Foreman fought as a smothering, terrifying power puncher through his early career. As his head coach, Dick Saddler put it, Foreman fought with his hands well out in front of him to smother the opponent's punches before they got going just as Jack Johnson used to (and as Saddler's own cousin, Sandy had done). That was young Foreman, he wanted the fire fight and he wanted to be able to smother the jabs to get there.

When Foreman was a forty year old man, he began to look a lot like his other long-time coach, ageless Archie Moore. The cross guard which had been Moore's trademark suddenly became Foreman's go-to. The big old timer wasn't fast enough to cut the ring and smother his opponents in the first round. Instead he used his great reach and his thudding jab, letting the lead hand fold across his belly as his right came up to fold across his head as soon as he suspected something was coming back. A few rounds of pounding against his guard with mixed success, and most heavyweights couldn't run so fast any more.

While the spectacle of MMA is about building fighters up as invincible, the humanity of each is what makes the sport so interesting once you have been with it for a while. No one can do it all and with every addition something else is pushed to the background. How Conor McGregor's new kicking game and aggression will match up with Jose Aldo's own still-changing game is something to speculate on another time but the fact that both are constantly adding, removing, and adapting is what makes them so special. In this game a stagnant fighter—however great they are—is already done. They're just waiting to be worked out. A changing one, even without the same physical gifts, has the potential to become something great.

Please Show Up: Is UFC 194 Our Last Chance at Aldo vs. McGregor?