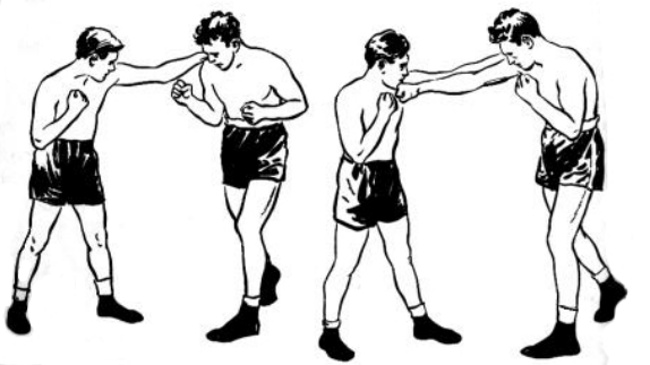 Three years before his death, the Japanese duelist, Miyamoto Musashi set about committing his method of swordsmanship to paper. The now legendary swordsman had fought sixty duels, often to the death, against some of the most accomplished fighters in Japan. While the Go Rin No Sho or Book of Five Rings might seem to be a work on swordsmanship, you could tear Musashi's writings on the Three Initiatives straight out of his 1642 manuscript, carry them to any boxing, kickboxing, mixed martial arts, or even fencing bout today, and you would readily see them in action.

They have a lot of different names, but the Three Initiatives we discuss in episode two of Jack Slack's Ringcraft are the three circumstances under which one can strike an opponent. All blows which land in a striking contest can be categorized to one of these initiatives, whether the fighter is conscious of the timing or not. The difference is that when a fighter understands these three timings, he is no longer banging keys on the piano and hoping to come up with a jingle, he is building beautiful chords and melodies through an understanding of musical theory. These are the building blocks of elite striking, and while they are simple, they can be carried to deceptive complexity through the genius of skilled athletes.

The names change from coach to coach, but they pretty much come down to:

Leading might seem like the simplest of the three concepts, but it often provides the lowest reward while exposing the leading fighter to counter strikes. Leading straight off of the bat is absolutely an option, but often the smartest method of doing so is with long, non-commital strikes. In Ringcraft we discussed the obvious one: the jab, as well as the teep, the low line side kick, and the front leg snap kick. When attempting to lead without any set up, physical attributes such as speed and reach really come into play.

But when leading, a fighter is attacking an opponent who is standing in his stance, with his guard up, ready to either defend or counter. So the chances of landing clean are pretty low if the leading fighter doesn't take some kind of measure to either remove his opponent's guard or the ability to counter.

There's a ton of different ways to do it and, while not exhaustive, Bruce Lee's Five Ways of Attack cover a good number of the bases:

Simple Angle Attacks (SAA) – Taking a step off line and coming in from the new angle. Everything a fighter learns on the defensive end is to deal with an opponent attacking from directly in front of him, a change in angle changes the game altogether. Most fighters will turn rather than let the leading fighter get a dominant angle, but the act of turning involves pivoting around one foot, during which time the pivoting fighter lacks the ability to hit with power. To illustrate this point, the brilliant T.J. Dillashaw getting to the inside angle on Renan Barao:

For more on angling, I recommend the first chapter of Finding the Art.

Hand Immobilization Attack (HIA) – This is simply taking one of the opponent's hands out of action with one of your own. I often use the term 'Hand Trapping', and this is closely linked with the concepts one will see in traditional martial arts 'sticking hands', and in the trapping methods of Kali, Wing Chun, and Muay Thai. The act of trapping one hand removes both the guard for one side of the body, and half of the available counter punches for the victim. Watching Wladimir Klitschko fight, you will often see him use his left hand to drag the opponent's right hand out of the way—making it easier to throw his right straight—but you will also see him use his left hand to drag the opponent's right hand in the same way, removing the danger of a counter punch. The hand Klistchko drags depends on what is available, but either is an improvement of odds for him on the exchange. Other examples of hand trapping into power striking include Fedor Emelianenko's “Zulu” left hook, and the trapping to elbows of the young Muay Thai star, Muangthai:

Fedor Emelianenko, clearing the lead hand and jumping into the space made.

Muangthai smothering the opponent's hands to land knees and elbows.

While Lee's philosophies around Immobilization Attacks were largely limited to hand fighting—due to his Wing Chun heritage and love of boxing—it is worth noting that foot trapping and of balancing with the legs are excellent methods to set up attacking flurries. Foot sweeps or low, low kicks to the calf that knock opponents off balance. Alternatively, in boxing the 'foot trap' is the act of stepping on an opponent's toes, holding him in place and increasing the likelihood that he will fall if hit, due to a massive reduction in mobility. James Toney skip-stepped to catch John Ruiz's feet as the big man stumbled backwards.

Furthermore, the simple act of low kicking serves to immobilize opponents be it by punting their leg out or by forcing them to stand on one leg momentarily to check the kick.

Progressive Indirect Attack (PIA) – This is essentially misdirecting the opponent by aid of a feint. I covered the importance of feinting at great length a couple of weeks ago in an article entitled The Power of the Punch Not Thrown. The strength of the feint in that instance was that it throws the counter puncher off. Repeated feinting makes it very difficult to differentiate between legitimate attacks and movements designed to induce missed counter swings. Missing punches is embarrassing and tiring, so feinting will always be invaluable against the scarier counter punchers in the game.

But Lee was referring to a feint into an attack, setting up the second blow.  An opponent is only in his guard until he reacts. His reaction opens him slightly more based on what he does. These range from a committed dip off line when shown a fake straight, leading to a huge high kick.

To something as conservative as attempting to parry a jab which doesn't come, exposing the right side of the jaw to the left hook.

Attack By Combination (ABC) – The standard staple of the Dutch style of kickboxing, and a popular mainstay in MMA. This is something of a scatter gun approach in that you throw in rapid combination, hoping to force a cover-up from the opponent, then capitalize on that position. If you really need to see this in action, watch Ernesto Hoost or Rob Kaman throw two, three or four punches against the guard just to land a sinister low kick.

Bonus body shot, no one will say no to that.

Attack By Drawing (ABD) – This falls under counter striking, which really fits in better with the other two initiatives.

Not a comprehensive list, and one which I'm sure we'll look at in more detail at a later date, but most effective methods of leading can be categorized into one of Lee's groups. And certainly thinking about techniques through that lens will allow a student of the game to come up with new techniques to catch opponents off guard.

In the simplest terms, a technique is considered as two points. Take the jab for example: the fighter is on guard, and then he is at full extension, and then he is back to the guard. There are two postures, the guard and the jab. With the shoulders high and shrugged in both, his chin down, and a good guard up, a fighter is convinced he is fairly safe.

To a more sophisticated eye, there are not two momentary positions, but two enormous windows In which to counter. As the fighter extends into his strike, and as he recovers from his strike. He cannot remain protected by his shoulders and gloves the entire time. Delayed counters are strikes thrown as the opponent is recovering his position. I would say off of a missed strike, but honestly it doesn't always have to be the case. I have seen dozens of fighters land a good punch, and then get knocked out as they returned to their guard.

Delayed counters are about “make 'em miss and make 'em pay”. While the examples given in episode two of Jack Slack's Ringcraft were what one might call 'defensive counters', the delayed counter absolutely has offensive applications. Many of the best technicians in boxing will flick out the jab, and immediately be moving into position to evade a return and counter, even if nothing is coming back at them. It is a pro-active rather than reactionary method of landing counters. For example, Roberto Duran would fire out his jab and move his head in a different direction immediately afterwards. When his opponent jabbed back—as almost everyone in the world eventually will—he would be out of the way of it and ready to fire in his chopping body blows underneath their arms.

Equally, for a more measured approach to Delayed Counters, Jersey Joe Walcott was a master. Though you might also call his method erratic and risky. Walcott would dance around and change stances in front of opponents only to slip and fire back a right or left hook. Against Joe Louis, the greatest heavyweight of all time, Walcott happily turned his back—encouraging the usually measured champion to lunge in, at which point Walcott dipped away and countered with a cracking right hand.

Arguably the most powerful of the Three Initiatives is the Simultaneous Counter. This is a counter which is thrown as the opponent is in the explosive movement of their own technique. As the jab comes out, or as the kick comes up. Where a Delayed Counter catches an opponent just after they have missed and are returning to their guard (or sometimes continuing in combination), a Simultaneous Counter is one which strikes the opponent in the expansive part of their motion.

In episode two of Ringcraft I used the examples of Lyoto Machida's reverse punch, Anderson Silva's counter jab against Yushin Okami, and the ever popular cross counter. But almost any strike can be utilized as an intercepting counter. I can't name a strike which isn't more powerful when the opponent is moving on to it, after all. A couple of my recent favourites have come from Donald Cerrone.

Where Cerrone used to be a wild brawler with some excellent low kicks, he's matured in recent years and now excels at timing his opponents coming in. Most famously with his intercepting knee, which badly winded Jim Miller, Evan Dunham and Eddie Alvarez among others.

But also with that Badr Hari favorite—drawing the right hand and kicking the exposed ribs with the left leg.

Perhaps one of the best examples of Simultaneous Counters which many readers / viewers might not be familiar with is the work of Nathan Corbett. Corbett specializes in elbow strikes, but they're difficult to get off, being almost half the length of punches. Consequently, Corbett will step in on his opponents when they strike and land his elbows over the top or up the middle.

But again, Simultaneous Counters are not exclusively reactionary weapons. Here is the great Teofilo Stevenson baiting the trap by flashing the double jab, expecting a return, and immediately lacing the right cross counter over the top. And he did it dozens and dozens of times, slipping the jab and timing the right exactly the same way.

Three Strikers Every MMA Fan Should Be Ashamed Not to Know

The Power of the Punch Not Thrown

Punching with the Toes: The Secrets of Hitting Hard