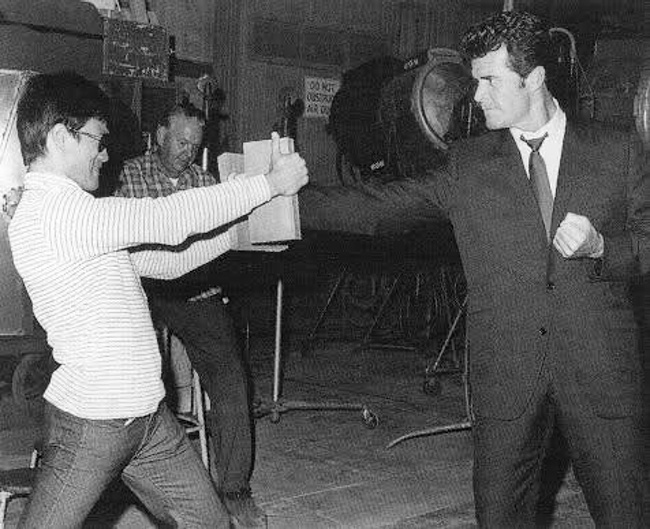 He was a great actor, with a career that spanned over half a century and included two iconic TV series (Maverick in the fifties and and Rockford in the seventies) and roles in films like The Great Escape, Victor Victoria, and Space Cowboys. He was also, by all accounts, a real mensch who received two Purple Hearts for his service in the Korean War, marched with Martin Luther King, and supported a number of humanitarian causes. 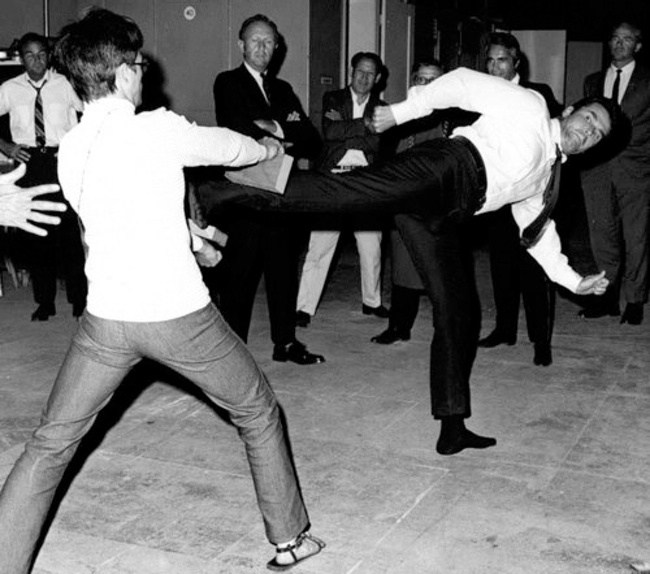 The actor and the martial arts hero first worked together on the set of Marlowe, a 1969 film noir-ish offering based on the Raymond Chandler novel Little Sister. Garner played Phillip Marlowe, a detective who was on the hunt for a client’s missing brother. Lee, in his only villainous role, played Winslow Wong, a Kung Fu expert with mob ties.

In their first scene together, Winslow Wong shows up at the detective’s office, kicks a wall, chops a coat rack, and attempts to bribe Marlowe into dropping the case. When Marlowe refuses, Wong embarks on a far more thorough office-trashing and kicks the shit out a lamp for good measure.

All of the action in that first scene is between the martial arts star and the furniture. Garner’s character simply sits behind his desk and makes a few snide remarks with a proto-Rockford wryness. But the pair do come to some semblance of blows in their second and final scene together.

It’s not exactly the greatest action sequence, but then Marlowe wasn’t exactly the best film. Both had their selling points, though.

As widely-panned as the movie was, Marlowe did one very significant thing right: it gave Bruce Lee his first major Hollywood break and helped to introduce him to American audiences. And as unfortunate as that fight scene was, it gave Garner, who did many of his own stunts over the course of his career, a chance to train with the martial arts master.

Garner clearly liked what he saw, because he soon joined Lee’s roster of famous clients like Steve McQueen and James Coburn and started taking private lessons in Jeet Kune Do, the martial art that Lee founded.

If you really analyze Garner’s work on The Rockford files, there’s a chance that you might be able to see the occasional hint of his Jeet Kune Do training come through. Even though he was starting to push fifty at that point—and even though he broke a few bones and strained a number of muscles along the way—he still did many of his own stunts on the show. The Bruce Lee influence in his later work, like 8 Simple Rules For Dating My Teenage Daughter and The Notebook, is probably a little less obvious.