Rising Up, Rising Down 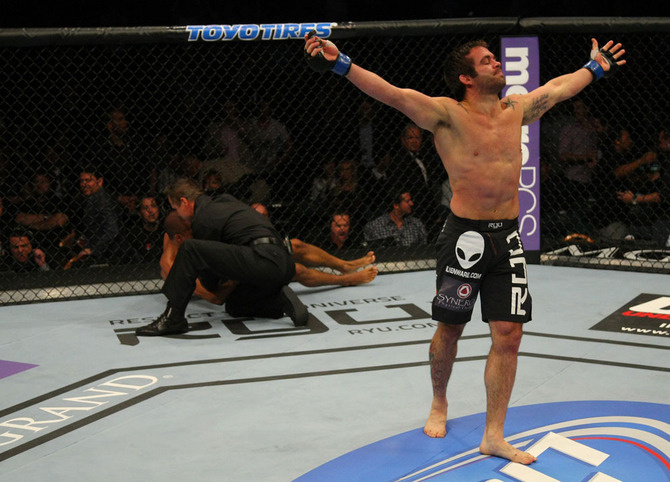 In 2009 Jamie Varner had the world on a string. Only 24 years old and the World Extreme Cagefighting lightweight champion, Varner was young, talented, and good-looking -- one of the faces of a big-name promotion that was getting ready to merge with the UFC (which already owned the smaller organization).

By the time that merger happened in late 2010, however, Varner had been cut. The former college boxer had defended his belt successfully only once before losing three of his next four fights in the WEC. Barely a year after fighting Benson Henderson (who headlined last weekend’s big UFC pay-per-view card) in front of 10,000 fans in Arco Arena, home of the Sacramento Kings, Varner was facing Tyler Combs (who didn’t headline last weekend’s big UFC pay-per-view card) at an Xtreme Fighting Organization event in Hoffman Estates, Illinois, home of the Chicago Bliss of the Lingerie Football League.

Like a fallen angel, Varner was cast into the outer darkness of the regional circuit, condemned to toil in feeder promotions like the Titan Fighting Championships, where young fighters learn their trade, middling fighters ply their trade, and old fighters just try to hang on. Promotional executives like to call this cutting process “being released,” as if these fighters are now free to enjoy the thrill of slaving away in small-money fights in backwater towns. Fighters, I’m guessing, call it something else, though only in private.

In public, everyone acknowledges that the purgatorial model is just the reality of mixed martial arts: After the UFC releases you, you have to fight your way back into their good graces. A win here, a win there, and – who knows? – maybe you get the call to come back. As far as I know, no other sport works this way. In the NBA, for example, players have guaranteed contracts with particular teams; if those teams want to get rid of that player they either have to trade him to another team or buy him out, at which point he can still take his services to another team. Commissioner David Stern can’t just dropkick Kwame Brown out of the league on a whim (as much as I’m sure he’d like to and as much as Brown probably deserves it).

But the UFC takes a far more unilateral approach to athletes’ careers: If President Dana White doesn’t want you in the promotion anymore, you’re out. UFC fighters can be cut for any reason at any time. Lose a few fights in a row? Win but win boring? Fail a drug test? Don’t live up to expectations? Say the wrong thing? You’re out. Or you’re not. Some fighters, like Dan “The Outlaw” Hardy, can lose fight after fight and keep their jobs; others lose once and they’re ghosts.

It’s hard to say if this model is good or bad. On the one hand, workers’ employment existing completely at the pleasure of management sounds an awful lot like factories in the early 1900s, before labor unions convinced people that contracts should be treated like contracts. What job security do fighters have when their contracts can be torn up for any reason and they can be tossed from the UFC train with barely enough time to grab their luggage?

On the other hand, the UFC’s approach to employee evaluations does lend itself to exciting fights: When fighters don’t know when and from what angle their pink slips might be coming, they usually try their hardest to stay in the boss’ good graces. The threat of release is a constant reminder of the precariousness of life at the peak of mixed martial arts, a memento mori for a bloody sport: Remember you can be cut.

The MMA system also sets up opportunities for high drama better than any other sport because tragedy and redemption are built in. If all it takes for a fighter to go from champion to exile is a few measly losses, and all it takes for a one-time castaway to be granted access back into the fold is a few measly wins, chances are good that any given UFC card is going to feature a few fighters “fighting for their UFC lives” and a few who have worked their way back into the promotion after long stretches in the minor leagues. Olympic TV producers would weep to get their hands on such sentimental gold – tales of triumph and tragedy and triumph again, perfect for gauzy cameras and a swelling string soundtrack.

This past May, Jamie Varner fought in the UFC for the first time in five years. A month before he had agreed to fight on a card being put on by Legacy Fighting Championship, a successful Houston-based regional promotion that is a thousand light years away from the glitz and glamour of the UFC, but then he got the call he’d been waiting for: Would he be willing to face Brazilian up-and-comer Edson Barboza at UFC 146? After slogging away for two years in MMA’s back alleys, Varner knew an opportunity when he saw one. He took the fight and a month later shocked the MMA world by knocking out the previously unbeaten Barboza in the first round.

Last week, Varner fought his second UFC post-reclamation fight, this one a brilliant back-and-forth battle with Joe Lauzon at UFC on Fox 4. Though Varner eventually succumbed to a triangle choke, no fighter ever won so much for losing. By hanging in with one of the UFC’s best lightweights he had confirmed that the Barboza fight and his years as a top WEC fighter weren’t flukes. The UFC couldn’t have scripted the story any better if they tried. Here was proof that the company’s ruthless approach to promotion and relegation worked -- not just because fans got to see a great fight but because they got to soak in the human story of a onetime great fighter resurrected and given new life … by the very same people who had left him for dead all those years ago.