Road to the Undisputed: Gennady Golovkin Will Face David Lemieux in Unification Bout 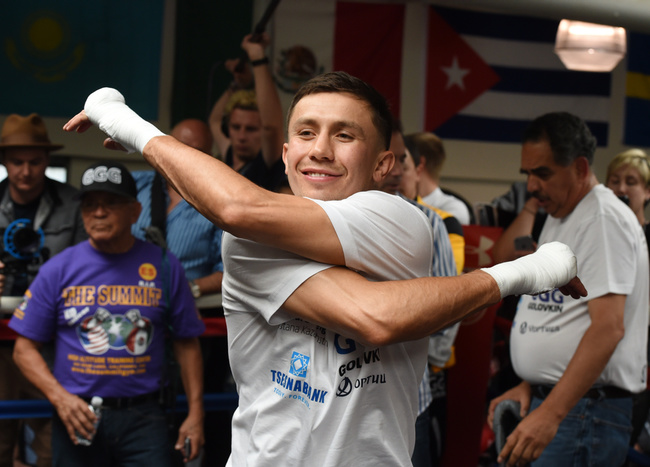 The title of boxing’s “most feared fighter” has been thrown around many times in the past. The tradition goes as far back from the forgotten Sam Langford to the contemporary likes of Antonio Margarito and Paul Williams, and probably no other fighter embodies the name better than the ferocious Mike Tyson. About a year ago, Fightland wrote an article on Gennady Golovkin, the current WBA and IBO middleweight champ, and the most recent incarnation of the moniker as touted by media outlets. With an unblemished 33-0 record accompanied by a 91% KO ratio, it’s not unwarranted to suggest that many middleweights would be hesitant step into the ring against Golovkin, but on October 17th, David Lemieux will do just that, and challenge his right to be called fearless.

Golovkin is a throwback fighter. At 33-years-old, he boasts the impressive feat of never having been knocked down in a fight, which includes an astonishing 345-5 record in the amateurs. He’s also been willing to go down in weight for a super-fight with Floyd Mayweather, and up in weight for the next best challenge in Andre Ward. While jumping weight classes is now common in the sport of boxing, doing so to pursue the toughest challenge isn’t. Based on looks and personality alone, Golovkin’s polite baby-faced mannerisms don’t exactly evoke a sense of fear; instead, the Kazakhstan native carries himself with an air of well-mannered work ethic, a trait that can be visibly seen in his 9-year climb to the top of the middleweight ladder. His past seven opponents include Willie Monroe Jr., Martin Murray, Marco Antonio Rubio, Daniel Geale, Osumanu Adama, Curtis Stevens, and Matthew Macklin, all noteworthy fighters that have fought on broadcast television as betting favorites. Combined, they offer a total record of 213-20-2. With negotiations for a potential bout against Mayweather or Ward falling through, the only other names worth throwing into the mix are Puerto Rico’s Miguel Cotto and the new beloved son of Mexico, Canelo Álvarez. But with only the date and location to be finalized in a showdown between Cotto and Álvarez, Golovkin is now forced to find an interim fight to stay warm on the sidelines.

That fight comes in the form of Canada’s David Lemieux, a Québécois who most recently won the IBF strap against France’s Hassan N’Dam N’Jikam last month, where the Frenchman was dropped four times en route to a 12-round Lemieux decision victory. While Lemieux doesn’t hold the same amateur pedigree as Golovkin (Lemieux turned pro at 18), his last seven victories come over opponents totaling a 151-30-2 ledger, a challenge that he has bested with an equally impressive 88% KO margin (31KOs in 34 fights). Safe to say, Lemieux holds devastating power in both hands, and it wouldn’t be an overstatement to suggest that fight fans can expect a war in October.

In physical dimensions, the two are evenly matched. Both fighters tally a final reach of 70-inches, and Golovkin only holds a one-inch advantage in height. In age, Lemieux minors Golovkin by 7 years, but when examining the quality of opposition on their resumes, Golovkin makes up for that disparity in experience. In ring attributes, one cancels out the other yet again. Lemieux has questionable stamina, and Golovkin can get sloppy on the inside—two traits that can prove lethal against a hard-hitting opponent. But if common opponents are any predictive indicator, then it’s worth noting that Lemieux dropped a 7th round KO loss against Marco Antonio Rubio, a fighter that Golovkin knocked out in the 2nd round three years later. All factors considered, I favor Golovkin to win the fight by knockout, but I’m even more confident in saying that it will be a firefight before the bout ends.

The one downside is that it is to be featured on HBO PPV, instead of the more-fitting World Championship Boxing series that is free for its subscribers. Observers may argue that a card featuring names of marginal recognition doesn’t warrant a pay-per-view price tag, but I argue differently. Let’s look at it in a broader context:

First, the fight is a step in the right direction for boxing. Both contenders have spent the majority of their respective careers in the same division and have stayed in it to clean it out, a seemingly lost trend in boxing. There are no catch-weights, no rehydration clauses or restrictions on glove choice, an unfortunately rare occurrence that boxing is in desperate need of having happen more.

Second, it’s a unification bout. With the victor expected to face the winner of November’s WBC title showdown between Álvarez and Cotto, this fight is one step closer to producing the first undisputed middleweight champion since Bernard Hopkins last joined the belts against Felix Trindad in 2001 (Jermain Taylor went on to win the belts from Hopkins in 2005).

Finally, the two present challenges for one another. Both guys have vulnerabilities to exploit and advantages to utilize. They are both in their physical primes and have worked hard through a mountain of durable opponents to earn their shot. A good fight can be expected.

On October 17th, both fighters are looking to accomplish a mission in the ring. Golovkin will be looking for his 21st consecutive knockout in 34 fights. Lemieux will be looking to dethrone the sport’s most feared fighter. Add those to the fact that this fight is en route to crowning the first undisputed middleweight champ that boxing has seen in nearly ten years, and one could even conclude that these are actually the type of fights that deserve a pay-per-view price tag. And at least for me, witnessing two fighters go to battle on a mission is always something worth paying for.

Jack Slack: Four Strikers That Every MMA Fan Should Be Watching