Robbie Lawler Is Not Your Stepping Stone 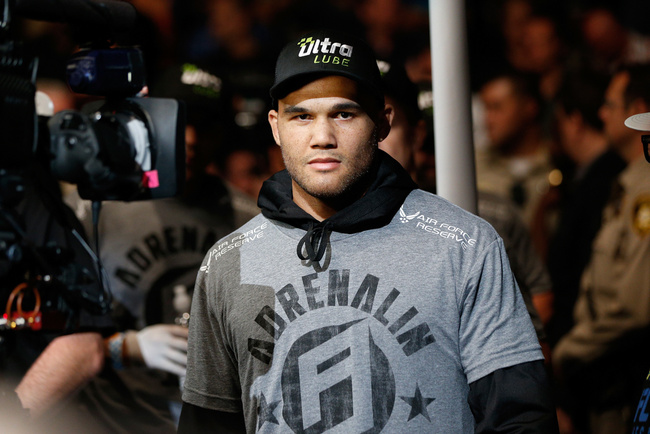 The young devour the old. It’s a brutal fact of the fight game. Just as the old resist, denying their slowing reactions and antiquated strategies. “I feel better than ever.” “This is the best I’ve felt in camp.” “I’m gonna teach this young buck a lesson.” But there are no microphones in the Octagon. In the Octagon, forget the pre-fight build-up—a fighter eats what he kills.

It’s no different in the jungle. A silverback rules the tribe, calling the shots, enjoying the choicest grub, and a harem of females—that is until a young bull challenges for the throne. The others circle, cheering the vicious action. If the silverback dominates, the others quiet and he reigns until the next challenge. But losing, he sulks into the trees and the young bull enjoys his spoils.

Or as I like to think of it, UFC Fight Night: Out with the Old, In with the New.

Take Anthony ‘Rumble’ Johnson vs Antônio ‘Little Nog’Nogueira, who has been fighting MMA for thirteen years. Holy shit, talk about a mismatch. Johnson shuffled in, backing Nog against the fence, hardly utilizing footwork, just waiting, waiting, waiting, then at just 35 seconds into the first round he unleashed a flurry that dropped the silverback to the canvas.

These pairings are often sad, but necessary to build up the new generation.

Most highly-regarded fighters traverse a worn path up the mountain: going pro; notching a few wins over middle-of-the-pack fighters, which foments media hype and fan speculation (e.g. Conner McGregor); besting an older once-revered fighter who serves as gate-keeper to the next stage; then facing a top-seed, where upon a win, earns him/her a shot at the belt.

But win or lose, every fighter eventually loses traction and begins to slide back down. Some slow, some quick. Some through heinous losses. Some through visibly-slipping skills and close decisions.

Few retire before they slide enough to serve as gate-keepers. A role that none want, and even fewer claim. 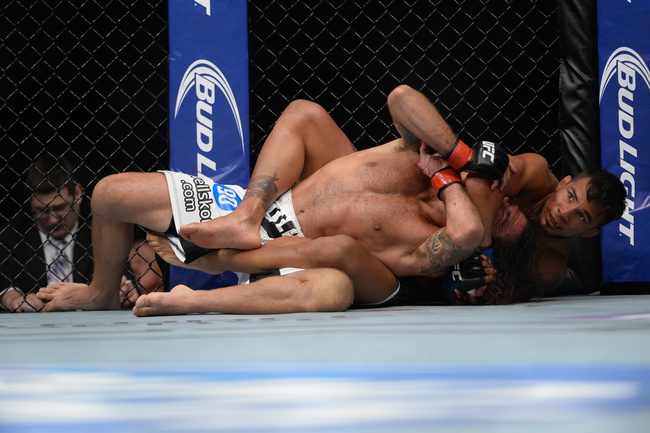 Consider Clay Guida vs Dennis Bermudez: Guida started fighting in 2003, over eleven years ago. A fan favorite. Strikeforce Lightweight champion and UFC title contender, now with just two wins out of his last six outings. Bermudez, on the other hand, first entered the ring in 2009, and he’s on a seven-fight win streak. Now with his second-round submission over gate-keeper Guida (rear naked choke at 2:57), Bermudez is calling for a title shot.

"Realistically, I want the title shot,” he said at the post-fight presser, “I have got a lot of wins. I've been finishing guys and I'm an exciting fighter.”

David Williams contributes stats-based analysis for the UFC. A few years back he penned a great article titled ‘The 9-Year Rule: A look at career lengths in Mixed Martial Arts,’ which included the following data:

David summarized the chart by stating: “The steepest drop takes place after the fighters measured had been competing professionally for 9 years. At that point, the ability of the fighters to compete against quality competition declines to the same level as when they were relative rookies in the sport.”

Again, last weekend’s card served to bolster this argument, as Josh Thompson lost a close decision to Bobby Green. Fighting professionally since 2001, Thompson has lost three of his last four. Now that doesn’t mean he’s washed up. Just means he’s more likely to wear the gatekeeper cap than the crown.

It’s the 9-year rule. It’s entropy, the second law of thermodynamics, which states that all systems, including this mortal coil, gradually deteriorate into chaos. In layman’s terms: none are immune, every fighter eventually slides from his peak.

Except Robbie Lawler, who just notched a unanimous decision over Matt Brown—what an animal this guy is.

Like Nogueira and Thompson, Lawler’s been swinging leather since 2001, when he first entered the Octagon at UFC 37. But unlike his peers, since rejoining the league at UFC 157 Lawler has won every fight (five of six), save a close decision during his UFC 171 title bout with Johny Hendricks.

This latest win over Brown just earned him another shot at the throne. Nice to know rules really are meant to be broken.