Robbie Lawler versus Matt Brown: Turning Back the Swarm 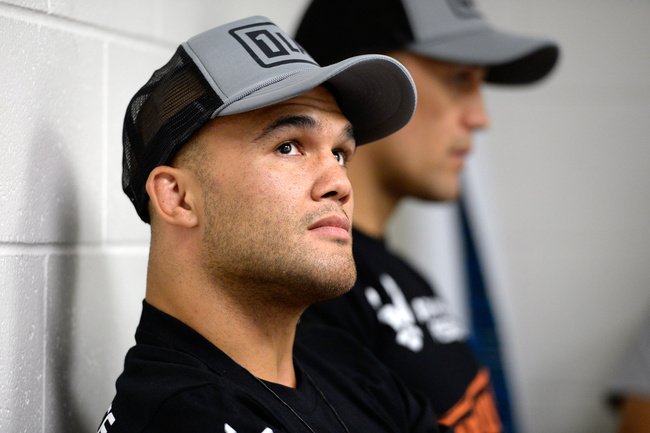 UFC on Fox 12 provided another great night of fights.

Bobby Green defied the odds and fought through the awful time he is having outside of the ring at the moment to take a decision over the crafty veteran, Josh Thomson. Dennis Bermudez bagged a sizeable feather for his cap by submitting Clay Guida. And Anthony 'Rumble' Johnson added to the many calls for the Nogueira brothers to retire by easily stopping Antonio Rogerio Nogueira.

But the highlight of the card was the main event. So rarely are these scrapper versus scrapper fights as good as advertised—but Robbie Lawler versus Matt Brown was the definite article. Over five rounds, both fighters did all they know how to do—tried to take the other man out. It is that fight to which we will turn our attention today.

From the opening bell, Robbie Lawler took charge of the fight and did what he had to do—make Brown worry about charging in. In the week up to this fight we spoke about how this bout was swarmer (Brown) versus counter puncher (Lawler). You would think that the more you throw at a counter puncher, the more opportunities you give them. That's the great lie which wily counter punchers want to put forward.

The truth is that the more you flurry and the more you crowd them, the more the clean, accurate puncher's vision becomes clouded by strikes and he is forced to defend himself instead of look to pick holes. The classic example is Ricky Hatton versus Kostya Tszyu. Tszyu is ranked as one of the top 100 punchers of all time, and the best to ever fight at light welterweight. If you fought a measured fight and allowed him time to think and work, you'd be made to do the chicken dance as Zab Judah famously did. But Hatton stuck to Tsyzu, made it ugly, and as the fight progressed the threat of a big counter punch became the chance of a big counter punch, and then completely evaporated.

A more relevant example to an MMA fight would be that of Cain Velasquez versus Junior dos Santos. When Velasquez stood on the outside, and gave Dos Santos time and space to work, Dos Santos was able to get Velasquez reaching and clout him over the top. In the following two fights, Velasquez wasn't technically perfect at all times, but he was on Dos Santos like white on rice, from bell to bell and soon the so called “puncher's chance” vanished.

To beat a swarmer, one must make them worry about closing the distance. To do what he does best, the swarmer has to move through boxing range, and that's when the counter fighter has to catch him and make him think that it can happen every time. That's exactly what Lawler did. At the first hint that Brown was moving towards him, Lawler threw and landed his cracking counter right hook.

Possibly the most important punch that Lawler threw in the fight, to set the tone and plant the seed in Brown's mind.

Brown was noticeably not himself from that point on. Rather than pressuring towards the fence constantly, he was fighting Lawler out in the middle of the octagon for much of the bout. And when you fight against a counter puncher like Lawler and fight tentatively, they can counter you almost every time you step in.

When Brown stood on the outside, throwing one shot at a time and attempting to duck out, Lawler was in his element—landing right hooks or using that right hook to set up the left uppercut.

This is exactly the kind of fight that Lawler wanted.

Brown had moments of success, of course—and indeed his best moments came when he bit down on his mouth guard and just moved in, without being so concerned about the counter strikes of Lawler—obviously a lot to ask of a fighter!

A particularly nice example came as he rushed into a clinch and immediately swept Lawler to the mat. This demonstrated a beautiful principle of Brazilian jiu jitsu and, in fact, all martial arts. If you knock someone off balance, their defense opens up. Whether it's the foot sweep of karate which forces the opponent's hands to drop as they attempt to remain on their feet, or the hip bump or scissor sweep of BJJ which force an opponent to post and open the elbow, exposing numerous attacks.

As Lawler scrambled to stay out of a bad spot, Brown was already working on a D'arce grip and looking to finish the choke. Just a lovely combination and two techniques (that foot sweep and the D'arce) which Brown has had considerable success threatening with with in the past.

Both men showed some creativity in the bout too, it wasn't—as we so often see—the same two ideas repeating themselves and one coming out on top. Here Brown picks up a single leg, which he knows he isn't going to finish, but uses it to try to land a powerful right straight as Lawler is recovering from defending.

Meanwhile, Lawler might have a few go-to favorites in his striking (the counter right hook and uppercut, the left uppercut, and the left body kick are constants) but he, too, was trying new things. As Brown began to block his counter right hooks, Lawler used the opportunity to land a lead upward elbow as Brown stepped in, a great way to slice an opponent's face up. Having thrown Brown a curveball, he went straight back to the right hook and found it far more successful than before the elbow.

Despite being behind on the cards and on the worse end of the strikes by the last round, Brown realized that he had to get the job done and put on a show. Brown did exactly what he had in the second round versus Erick Silva—ran out and went straight to work, and it seemed to rattle Lawler who was perhaps expecting a glove touch and a slow start as most do in final rounds.

Ignoring the threat of the counter punch, Brown simply went at Lawler and demonstrated amply the point that pressure often negates accuracy. Lawler's punches found the mark less cleanly than in the two strike exchanges of the previous rounds, and Brown even found a home for his brilliant elbows (sometimes off of faked punches which his corner had been asking for all night).

Arguably the finest moment for Brown was in his display of guts as he visibly injured his right hand, shook it out, and went straight back to throwing it with venom, cringing every time.

It was a brilliant scrap, and demonstration, by Lawler, of just how far ahead of the division his counter punching is. His difficulty with Brown's low kicks was still apparent, however. That is troubling because checking low kicks was, of course, the facet of his game which cost him dearly against Hendricks in their last meeting, but there's time to work on that.

Brown was far from disappointing, however. He has been fighting his way up for a long time and there were plenty saying that he would get smashed with this step up in competition. Brown has proven, without a doubt, that he belongs in the upper echelon of the division and should be fighting top five welterweights.

We know what is next for Lawler—a second date with Johny Hendricks for the UFC welterweight title. But what about Matt Brown? Well, the confirmation of a Nick Diaz return has fans shivering with anticipation over what could be the best all out war in welterweight history.