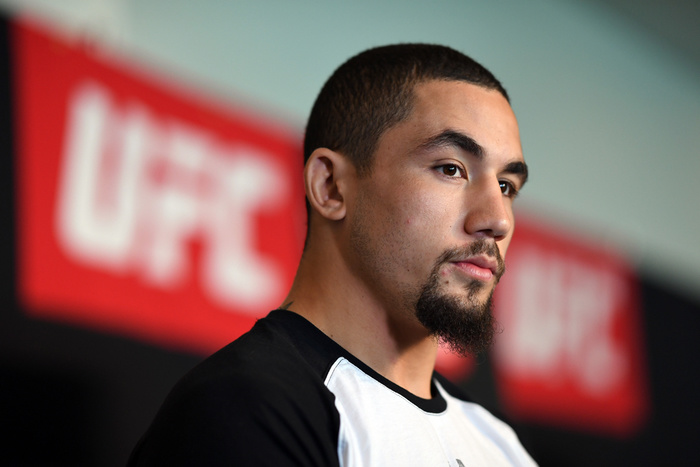 The alligator in the UFC's middleweight pond is swimming in circles. Ronaldo 'Jacare' Souza has just one loss on his UFC record which was a close three round split decision against Yoel Romero, who himself is now number one contender. But with Georges St-Pierre challenging for the belt, and Romero presumably after him, it looks like Jacare is going to be twiddling his thumbs for a while. His last fight, against Tim Boetsch, was clearly just to keep the Brazilian submission machine warm. But this weekend Jacare takes on a far, far more dangerous opponent in the form of Robert Whittaker.

Entering the UFC as a welterweight, Whittaker picked up a pair of victories before suffering a pair of losses, the latter coming by TKO against Stephen 'Wonderboy' Thompson. In June 2014, Whittaker made his middleweight debut and since then he has gone 6-0, stopping four of his opponents. More impressive is that he outstruck Uriah Hall, boxed up Rafael Natal, and stuffed all the takedowns of a wildly charging Derek Brunson. Not bad for the former welterweight.

What makes Whittaker such a joy to watch is that he perfectly mixes those touches of scientific class with attempts to swing haymakers. He could hang back and make every strike a jab or a front kick, but instead he'll sprinkle a healthy number of home run swings into his performances which are otherwise scientific schoolings. If you wanted the elevator pitch of Robert Whittaker, it could be done in two words: left hook. Whittaker is one of those fighters who can turn an opponent's head around with just a few inches to snap his hook through. His beautiful front kick to leaping left hook against Brad Tavares was remarkable because his hook barely came outside of the line of Tavares' body.

The left hook is Whittaker's money punch but he sets it up well through scientifically putting the points on his opponent with the jab and low kicks. Whittaker's jab is one of the sharpest you will see in the middleweight division and can be a hurting punch all on its own. Often Whittaker will chuck a long right low kicks between retreats to draw the opponent forward onto his jab. Clint Hester did not have a good time with this simple invitation.

Or if the kick effectively breaks the opponent's balance he will step in behind it with the jab again.

More interesting is Whittaker's ability to manipulate rhythm on his jab. Rafael Natal made it clear that he was looking to swing a counter each time Whittaker stepped in to punch. To exploit this, Whittaker feinted often, faking out the counter fighter.

Whittaker threw his lead shoulder in as if to jab, then sprung into the rest of the jab. A break of a beat between the faked jab and the legitimate one threw off Natal and allowed the punch to slip through once again.

And this is something you will hear a lot of coaches despairing. Feinting in MMA can often be enough to freak out a counter fighter and put him into passivity, but against experienced strikers it is necessary to start sneaking strikes through after the feints to make it important that the opponent stay on guard. The feinted half jab into a legitimate jab a half beat later is one of the most basic and versatile examples of this.

Whittaker also makes good use of front kicks and side kicks. Not always power kicks, but linear strikes which make full use of the length of the leg and which can often be followed by other strikes. Front kicks for a short range puncher? Well once a fighter has thrown a straight kick or two, the knee can be raised and the fighter can simply glide into punching range behind it while his opponent is bracing for a kick. Just another string to the bow.

And this is what makes the difference between a good striker someone with perfect form. Whittaker doesn't always throw his strikes in textbook fashion by any means but he does have a very good grasp of how to make his opponent's intentions work to his advantage. There is still plenty about Whittaker's game that is wild and devil may care. He will look for shifting left hooks, running left hooks, and even superman lead hooks which often see him fall over himself but occasionally score the bigger punches between his scientific striking.

Against Uriah Hall, Whittaker put on a clinic. Hall is the kind of fighter who wants to pivot away from most exchanges, work at a slow pace, and load up a big knee, kick or miscellaneous spinning counter. After noticing that Hall was pivoting away from him, Whittaker immediately began pounding in low kicks to the back of the pivoting leg. This is the big weakness in pivoting to the lead side and had Frankie Edgar continued to exploit it against Jose Aldo, he could have kickboxed his way to the featherweight title two times by now.

Hall began reaching down for the kicks:

And Whittaker began to mix in superman punches in hopes of landing heavy blows and in order to keep Hall honest.

In many ways, Hall is the other side of the coin to Whittaker. Hall is a fundamentally beautiful technician whose tactics and decision making cost him fights. Whittaker isn't always the prettiest in his form, but he keeps his man off balance and sets up his openings.

What are Whittaker's chances like against Jacare Souza? Who knows, but it's a damn good fight. Jacare is a near unstoppable force on the ground but he often shoots from way out in the open and doesn't cut the cage at all well. His striking doesn't extend far beyond an overhand right and a right front kick. But that hasn't mattered all that much up to this point. Whittaker has his work cut out in this fight: Jacare is an enormous middleweight who could well just ragdoll Whittaker. While Whittaker has never fought a grappler of Jacare's caliber, his takedown defence against other middleweights has been very encouraging. It is not just that he has excellent balance and can shuck off the takedowns of most. More important is that he has a good understanding of distance and his work rate serves to punish wasted takedown attempts. Whittaker is very good at stuffing takedowns and immediately coming up swinging.

Whittaker's most recent fight, a bizarre brawl against Derek Brunson, showed us the former welterweight under extreme pressure. Brunson was fighting at a hundred miles an hour from the word go, but had no luck overwhelming Whittaker. Whittaker went from purely defending himself, to picking off short counters and elbows, to finally putting it on Brunson: dropping him with a retreating counter and finishing him with a high kick.

The area where Whittaker could struggle is along the fence. Generally he has been good at keeping himself away from the cage but in the majority of his matches he has been either the aggressor or facing another striker who is happy to stay out in the open. Brunson was able to rush him onto the fence multiple times, but Jacare's best takedowns often come in the form of inside trips along the fence. What is more, Jacare doesn't typically need a lot of time on the ground to get his job done. Another pain in the side of Whittaker is that while any fight this important should be a five rounder, it is only scheduled for three. If the plan is to wear Jacare out, he has a rather limited window in which to do it.

Whatever the case, Whittaker's rise through the middleweight division has been an unlikely one and he continues to grow and to prove himself as one of the most thoughtful fighters in the game. He is going into the toughest fight of his career this weekend but there is certainly no reason to count him out.

The Tactical Guide to Rumble vs. Cormier

Elements of Style: The Double Attack