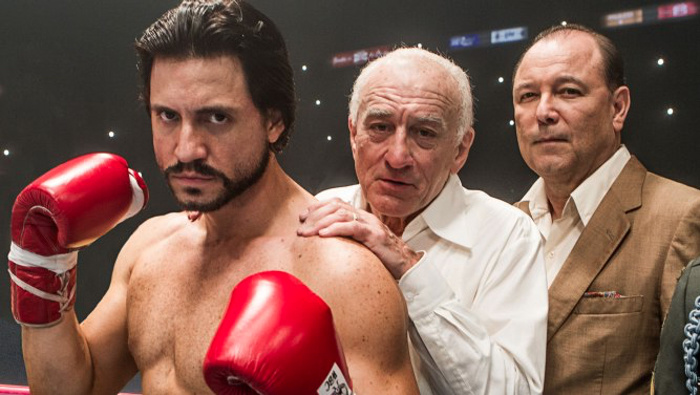 The highly-anticipated biopic on Panamanian boxing legend Roberto Duran has recently set its release date. “Hands of Stone,” shot by Venezuelan director Jonathan Jakubowicz and starring fellow countryman Edgar Ramirez as Duran, will be released on August 26th of this year.

The title is of course in reference to Duran’s ring moniker, which he earned for his 70KO ledger, and also for allegedly knocking out a horse with one punch. Duran was one of the “Four Kings” during boxing’s golden era, and faced off in a round robin with other fighting greats like Sugar Ray Leonard, Tommy Hearns and Marvin Hagler. He’s also only the second fighter to have fought a career spanning five decades (Jack Johnson was the first), and won titles in four different weight classes. He finished his career with a record of 103-16 at the age of 50.

Another featured character of perhaps equal pugilistic importance is trainer Ray Arcel, who will be played by none other than film legend Roberto De Niro. De Niro, who for fight films is best known for his award-winning portrayal of Jake LaMotta in “Raging Bull”, will be tasked with depicting the cerebral cornerman who allegedly trained over 2000 fighters, 22 of which went on to become world champions. Perhaps more recognizable of those fighters include Ezzard Charles, Jim Braddock, Tony Zale, Jackie (Kid) Berg, Alfonso (Peppermint) Frazer, Abe Goldstein, Frankie Genaro, Larry Holmes, Benny Leonard and of course, Roberto Duran.

On the other side of the ledger, Arcel is also known for handling 14 of the losing opponents against heavyweight champion Joe Louis. It soon became a routine almost comical.

"It was about the fifth or sixth fight I had against Louis," said Arcel in an article with the New York Times, "and when I took my fighter to the middle of the ring for instructions, Joe looks at me and says: 'You heah again?' I burst out laughing."

Other notable appearances include actor/pop-singer Usher playing Ray Leonard, and former middleweight contender John Duddy as Ken Buchanan, the fighter who Duran hit low to win his first world title. There has also been confirmation that a portrayal of famed trainer Angelo Dundee will appear in the film, as well as the infamous mob figure Frankie Carbo, who often ran fight cards and allegedly ordered Arcel to be struck in the head with a lead pipe for setting up matches on a rival network. With these characters confirmed, it will be interesting to see how much ground the film plans to cover in both the lives of fighter and trainer.

Both Duran and Arcel are important figures in the sport of boxing, and rightfully deserve their stories to be etched into cinematic history. With the acting caliber of De Niro, and clues to an intriguing storyline, “Hands of Stone” is shaping up to be a solid film. Fight fans could be in for a treat this summer.

Roberto Duran: The Stone Fists of a Nation