Roberto Tussa's Not Ready to Give Jon Jones His Blue Belt 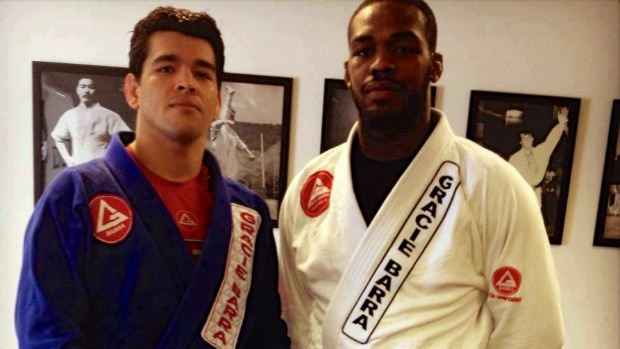 Jon Jones has been putting in work since dominantly beating Daniel Cormier earlier this year—mostly to keep getting better and better but also to show the world that he’s serious about life, his family, the sport and his career after he got popped with some coke in his system in an out of competition drug test. Following his UFC 182 victory, he announced that he was going to focus on getting his black-belt.

Bones even fully relocated from New York to Albuquerque, where he previously only traveled to for camp, to dedicate himself completely to his career and to perfecting the one aspect of his game—the BJJ—that he considered his weakness. At Jackson’s, Izzy Martinez is Jon’s wrestling coach, but his jiu jitsu training comes from venerated black-belt Roberto Tussa. A four-time world no-gi champion, Tussa received his black-belt from Carlinhos Gracie and represents the Gracie-Barra academy.

With a gi on, Jones is a white belt.

In jiu jitsu, graduating big MMA names in the jiu jitsu ranks often times causes rifts in the community. It’s a touchy subject. In the past, some stars of the BJJ world have condemned masters who facilitate the quick upwards mobility granted to some big names. Xande Ribeiro is one of those big critics, calling out without filter those who promote their students for their fame rather than their efforts.

Jonny Bones is currently a white belt, which seems a bit at odds with Jones’ overall pedigree. But it makes sense. He hasn’t been at the gentle art his whole life, and his current status in the discipline is not for a lack of effort or commitment. Tussa playfully explained to Tatame that Jones is going to get some “kimono work” in to scoop up a color because “white-belt is just not cutting it for the champ.”

About Bones’ jiu jitsu, he said that the current UFC light heavyweight champ likes learning new moves: “When he learns something new, he likes to try and apply it. He goes for ankle locks, triangles, things like that. Jon trains jiu jitsu twice a week, when it’s possible. His schedule is very busy…when he’s got time, they call me up. We roll some, I play with him. I’m not there to whoop anyone.”

As far as moving up in the ranks, he said that Jones needs at least a blue belt, but before that he needs to put in more work.

“Before anything else he needs to learn the principles of jiu jitsu, understand the rules, the philosophy, he has to spend some time. I can’t just give him the belt because he’s Jon Jones. So, about that classic photo where he’s got the white-belt, I said ‘Jon, I’m going to put the white belt on you because you never trained in the gi. You’re good as hell, you caught a black-belt in a guillotine and all, but that doesn’t make you a black-belt.’ So, I want him to put in work. It’s a way of forcing him to put on the gi and take some lessons, the same way my other students do. I don’t think it’s fair to my students who work one or two years to get a blue-belt for Jon—because he’s a UFC star—to get the blue belt without knowing the philosophy, without knowing who my master is. That’s how I think and he respects that a lot."

Jon Jones Speaks On Cocaine Use

Jon Jones vs. Blaise Pascal: The Imaginative Style that Wins All Wagers